The Charcoal Snake Method: Smoking on a Grill — In a Few Easy Steps

The charcoal snake method of fire management is one you need to learn if you want to do low n slow smoking on your standard kettle-style grill. It’s an easy-to-use, reliable, and highly effective way to smoke food controllably for many hours. So, brisket and ribs, here we come! 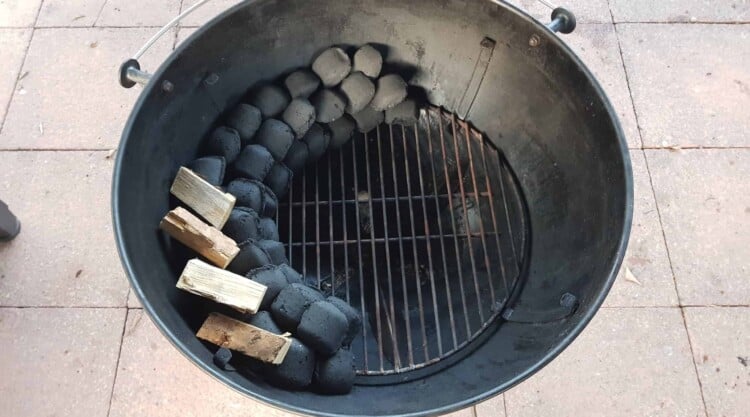 When I first heard about the charcoal snake method in grilling, I wondered why anyone would call a smoking technique by such an objectionable word?

When the word “snake” is said out loud around a grill — or pretty much anywhere — people start grabbing up the kids and running for the house. Screaming may be involved. A 2001 Gallup poll found 51 percent of Americans feared snakes, more than spiders, flying, or being in the dark.

In this article, we’re going to discuss the charcoal snake method of fire management, what it is, why you might want to use it, and it’s pros and cons compared to other fire management techniques.

You Must Use Charcoal — And it Should Be Briquettes

Charcoal is the fuel of choice because the method calls for a progressive low fire along the length of the snake and this is very hard to achieve with wood or any other fuel.

And it should be quite obvious that a gas grill won’t work.

I’ll be referring to the coal as charcoal briquettes through this article for a reason. Both lump and briquette charcoal have their pros and cons, but especially related to the snake method briquettes win out because:

The biggest objection to briquettes is rapidly burning away since the demand for all things natural and organic has made it possible to find briquettes free of traditional additives like starch, sodium nitrate (aka Chile saltpeter), limestone, or borax.

As for the higher amount of ash left by briquettes, it shouldn’t be as much of an issue since you’ll only use a few dozen pieces in a snake.

You can find out more as experts weigh in on one of grilling’s ongoing debates in our article discussing: lump vs briquettes?

For a good demonstration of successfully setting up for and using the charcoal snake method, check out this easy-to-follow video from Aussie Guy:

Basically you’re building a long charcoal fuse. While there are variations on how much charcoal to use, the basics are:

The beauty of the snake method is that, once it’s going, it doesn’t need constant checking. In fact, removing the lid disrupts the humid environment that creates great smoked food.

So relax and let it go its slow and steady way, fire progressing from one briquette to the next.

At the end of your cooking time, you should see a gray snake lining the side of the grill. During cooking, use a probe thermometer to test food for doneness and internal temp.

When cooled, clean up the grate, water pan, and snake. Enjoy some awesomely good smoked food.

What is the Snake Method of Cooking?

Using indirect heat, where the food sits away from the fire, this is a low heat process for smoking food for a long length of time, anything from 4 to 20 hours.

The name describes how the briquettes are arranged: Generally, 2 to 3 layers of slightly overlapping briquettes are laid in a long line around one side of the grill (looking like a snake). You then place heated briquettes on one end and, over the course of hours, the fire makes its way across the whole pile, like the slow-burning of a fuse.

When and Why Would You Use the Snake Method?

If you want the equivalent of a Crockpot meal from your grill, the snake method is one of the low and slow ways to go.

You can put something on, get it going and come back hours later — the next morning after a good night’s sleep or in the evening come home to a beautifully smoked brisket dinner.

If you’re not planning to smoke on a regular basis, your grill can stand in just fine as an indirect smoker. Then you won’t have to buy something which will probably end up spending more time being a yard ornament.

What Are The Benefits Of Using this Technique?

There are other low/slow methods out there, such as the minion method. And Steve Raichlen briefly describes the top-down burn, Minion, domino/fuse, and ember methods. The difference is in how the charcoal and wood are arranged.

Some are tossed together, some neatly laid out with the wood sprinkled on top. They all deliver a steady, low heat just right for smoking.

What Types of Grill Would You Use it in?

This method is most often associated with kettle-type grills (such as the infamous weber kettle grills) as a way to turn them into effective charcoal fueled smokers, but by design, an offset grill or smoker could work well.

A bullet or kamado, because of the narrow bottom, would limit the size of the food that could be smoked. But any grill where you can fit in a semi-ring of charcoal away from the food will work.

Rectangular shaped grills? A ring could work, but I’m curious what would happen if the charcoal rows went in a straight line, along the rim of a rectangular grill. But it couldn’t be called a snake then, could it?

But consider how the environment might affect the grill. Cold or windy weather can make it hard to keep a steady temperature inside if the walls of the grill are thin.

Which Would You NOT Use it in?

You can slow cook on a gas grill, but for prolonged, low n slow smoking it doesn’t work for two main reasons:

You also cannot use the snake in any smaller, or travel style portable charcoal grills, there’s just not enough room to create the snake and to have the food far enough away from the heat source for indirect cooking.

Influencing Factors on Effectiveness and Use

Outside Temperature Vs. Grill Wall Thickness

Grilling in cold weather can be a challenge, depending on the material and thickness of your grill.

A thick-walled grill can better protect the internal temperature, maintaining the low and slow temperature needed for long cooks.

Obviously a large, dense meat will take more time than a smaller cut or poultry, so you will need a longer snake. But how long?

This comes down to experience and will vary from grill to grill. So the best advice is to start with as long as a snake as you can build, and see what’s left at the end of your cook.

Any unburned coal can be used again, and by seeing roughly how far the snake burns over a cook, you will have a better idea of how long it needs to be next time.

If your meat isn’t done, but the snake nearly is, instead of finishing in the kitchen oven, simply add more briquettes to the unlit end to prolong the burning time of the snake.

Or you can start out with more briquettes by creating more rows at the start.

This also seems to be directed by what’s cooking and the type of grill being used.

This is an area you’ll want to experiment with since vents vary from one grill to another. A key point to remember is Commandment 9 of the Barbecue Bible’s 10 Commandments of Smoking:

Give in, read the owners’ manual for your grill to see what it recommends for vent settings while smoking.

Although the name may give pause, the lure of smoky goodness cannot be denied. I was going to misquote Shakespeare here but, you know where I’m going with “A roast by any other name…”

Think of the dozen or so ways to use the snake method; from the marinade to food choice to wood choice to the length of the snake.

How have you used the snake method — in a rectangular grill? If you get to it before I do, let me know how that works out, huh? Have you beaten the odds and found success with lump charcoal? Tell us about it in the comments below!