How to Remove the Membrane from Ribs — And Why You Should do it!

Rib membrane is tough and chewy, even after a long smoke when the meat is tender, and it spoils the presentation of the final cooked product. Some people like it, most don’t, so let’s get rid of it. Here’s how to remove rib membrane before cooking, in a few simple steps. 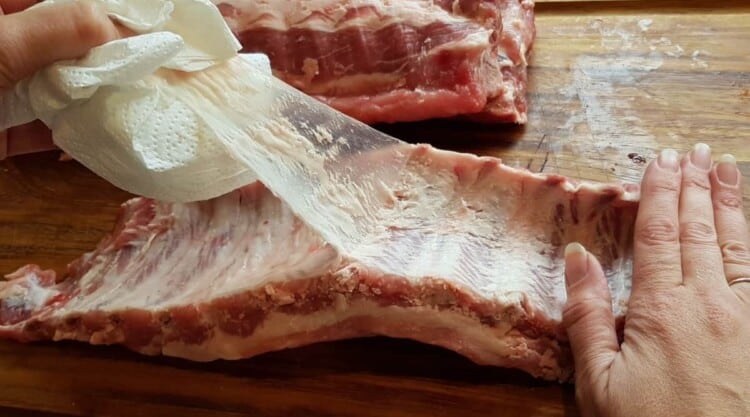 If you’re new to smoking pork ribs, no matter what style, the first thing you need to do is remove the membrane.

It’s something most pitmasters and rib lovers everywhere prefer not to eat as it’s tough, stringy, and just not appetizing to chow down on.

Some stores sell ribs with the membrane, or silverskin, already removed. You may not know this until you open the package. If the silver skin is still intact, removing it is no big deal, and is certainly a good idea.

So first, let’s discuss what this membrane actually is.

What is The Membrane?

You’ve seen it on pork ribs. It’s that silvery white opaque skin on the underside, on the bone side.

You’ll see it on all meats, but we don’t bother removing it unless it’s on beef ribs, pork ribs, or lamb tenderloin ribs. Some people refer to the membrane as silverskin.

When it comes to smoking ribs with the silver skin still on, it’s tough, chewy, and tasteless. Although experimentation shows that rubs and smoke will pass through it between the bones, it’s just tough, so why serve it?

Why Remove The Membrane And What If You Don’t?

Silverskin is elastin. Unlike collagen, it won’t break down no matter how long you cook it.

During ancient times, hunters used the elastin fibers to make their bowstrings and a string to attach arrowheads to the shafts. Can you imagine trying to eat meat with it?

Also, your food presentation is a big part of the joy of serving people. Without that membrane your smoked ribs will look more presentable, would you agree?

The question is, “What if we leave it on?”

A Washington Post reporter, Tim Carman, did just that. He cited TV cook show host, Andrew Zimmern as saying that he never takes it off. (Remember him? Andrew is the guy who travels around the world eating weird foods and live bugs for one of the food channels.)

Tim did a side by side comparison. One rack of ribs had the membrane on and the other off. He concluded,

“The ribs with the silverskin still attached were more fall-off-the-bone tender; the meat barely clung to the ribs, as though they had been smoked an hour or two longer than the other rack.”

He theorized that the membrane reduced evaporation and helped break down the collagen faster. He didn’t mention whether he ate it or not.

In another side-by-side comparison, Lyle from No Hippie BBQ concluded,

“I wouldn’t say there is a markedly different taste to ‘em.” I don’t think one is much better or worse either way.”

And, then there is this anonymous post from a forum:

“I kinda like the texture of cooked membrane, adds a nice texture to meat and fat.”

It just proves that you can’t please 100% of the people 100% of the time. There isn’t a unanimous consensus for removing the membrane, but you’re in the clear majority if you do.

And, if you want to win competitions, it’s mandatory.

How to Remove the Membrane from Ribs in 3 Easy Steps

The following video shows how to peel the membrane away from a rack of ribs. You also get to see how easy it can tear and how you’ll need the persistence to get it all off.

Whether you’re cooking pork ribs 321, or following a smoked beef ribs recipe, we always recommend you add this step into your prep:

It’s an easy three-step process to peel the membrane off pork ribs. You’ll want to use something dull to get under it such as a butter knife or spoon. You don’t want to use a sharp knife because it could slip and slice the rib meat or your hand.

Step 1 — At one end of the rack, slide the butter knife or small spoon under the silverskin to separate it from the bone.

Tooltip: You can use an oyster shucker (not a pointed clam knife) instead of a spoon.

Step 2 — Once you have it loosened, slide two fingers under and start to peel it away from the ribs gently.

Step 3 — Use a paper towel to grab the membrane because it will be too slippery to hold with your bare hands. Pull slowly trying to keep it intact. If it tears, you’ll just need to keep pulling the pieces until it’s all off.

Tooltip: For those that have catfish skinning pliers, try those. They are supposed to work well.

What If You Don’t Have Time for Membrane Removal?

If you’re pressed for time, buy peeled ribs with it already removed. However, it’s not a tragedy if you can’t find them and must smoke with it.

As we’ve seen, some people prefer the texture and the meat will be just as succulent. Season the rib as you usually do. The membrane is permeable, and the seasonings will pass through to the meat.

I hope this helps you in your quest for the perfect ribs. Let me know in the comments below how your ribs come out and whether you cook with the silver skin on or off — and why? It’s good to learn from each other!

3-2-1 Ribs Method: A Countdown to Smoking Perfect Ribs Every Time

How Long to Grill Ribs — For Perfect Bite and Texture

Spritzing Ribs on the Grill — Is there Really any Point? Let’s Find Out

Injecting Meat to Increase Flavor and Tenderness for BBQ and Smoking