What is Liquid Smoke? How to Make it home and When You Might Use it!

Liquid smoke is made by condensing down real smoke into a liquid form. It’s often used in place of cooking food on a smoker to add a smoky flavor. This article looks in-depth at how it’s made, its flavor profile, and what the experts think about its use. 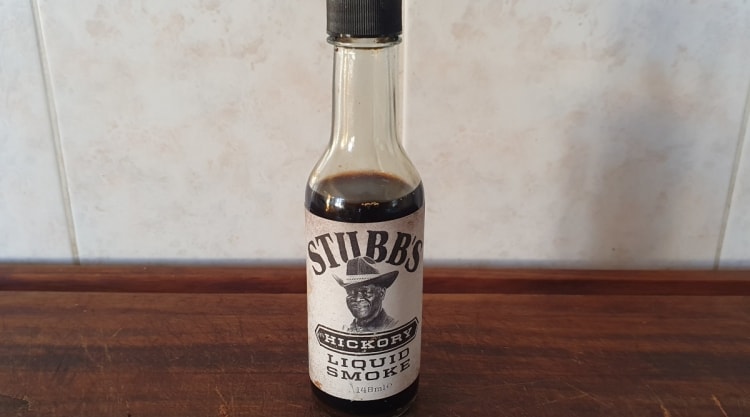 One day when I was in my early twenties, a roommate and I decided to cook some ribs.

Off we went to the supermarket where we picked up a couple of racks of baby backs. On our way to the checkout, my roommate grabbed a bottle of liquid smoke. I’d never heard of it before. What is liquid smoke? I wondered. He assured me that we needed it.

Back home we fired up the grill and cooked our ribs over direct heat at a low temp for a couple of hours. Near the end of the cook, we added it to some store bought BBQ sauce and slathered it on the ribs.

Friends, this may seem like blasphemy, but those ribs were pretty good. As a matter of fact, I remember thinking that those ribs were the best I’d ever tasted, and I’d never be able to top them (though of course, boy was I wrong).

Just as we finished supper, another roommate came home and saw the liquid smoke. Outraged, he told us that it was dangerous and full of chemicals.

Was this true? Is it synthetic? Is it dangerous? I hadn’t really thought about it. In this article, I’m going to set out to dispel some myths and set the record straight.

What is Liquid Smoke

It was discovered almost by accident. At a young age, Ernest Wright noticed some condensation dripping from a stove-pipe. Curiosity got the better of him, he tasted the water and noticed it tasted like smoke.

Later in life, he experimented with recreating the process and invented a method to condense smoke from an actual fire to make a smoke-flavored liquid that was safe to consume. Wright’s Liquid Smoke was born and is still in business today.

The short answer is: it depends.

If the ingredient label indicates that it contains only smoke and water, then yes it is indeed all natural.

However, some companies add other ingredients like molasses or sugar that are only meant to modify the flavor but would still be considered all natural.

Are There Nasty Chemicals in it?

As Andrew Wheeler from Serious Eats explains, since liquid smoke is made with real smoke, yes there will be carcinogens in it. Keep in mind; these carcinogens are the same ones present in the smoke itself.

So if you usually cook over any type of fire, you will be exposing yourself to the same risks.

It is worth noting that manufacturers claim to filter out many of these carcinogens and that when liquid smokes were compared to foods that had actually been smoked over a fire, they found the liquid smoke to contain a much smaller amount of carcinogens.

In other words, it is just as safe to use as your smokers and grills. Maybe even safer.

If you think smoking for real is hard work, you might want to check out some of the easiest to use smokers that are almost as simple to operate as your kitchen oven:

How Does Liquid Smoke Compare to Genuinely Smoked Foods

New York Times bestselling author Meathead from AmazingRibs.com does a great job of explaining the scientific difference between liquid smoke, and the type of smoke produced from a real fire pit.

In a nutshell, lit will never have the exact same notes and smoke flavor profile of food cooked over real flame, but when you combine it with spices and sauces, you can get results close to real barbecue.

How is Liquid Smoke Made?

We touched on this earlier, but here is the down low on how commercial liquid smoke is made.

Fire produces smoke, which means many things to a chemist, but to us laymen, it is basically steam and other vapors, also containing some solids.

This vapor is captured in cooled tubing and condenses into a liquid. This liquid is then filtered to remove any soot or ash, and liquid smoke is born.

How to Make Liquid Smoke at Home

Of all the ways you can make it at home, I think Alton Brown’s is the easiest and somewhat unique.

Simply set up a fire pit, grill, or charcoal smoker with a piece of heating duct to extend the smokestack, and by doing so allowing the smoke to cool down and be easier to condense.

On top of the smokestack, add a Bundt pan, then place an upside down bowl over the Bundt pan and place a bag of ice on top of the bowl. This will force condensation to form inside the bowl and drip back into the Bundt pan.

Light some charcoal and place in the fire pit with wood chunks or chips, and you are in business.

Here’s a video overview of the process to follow along with:

How to Use Liquid Smoke

You may be surprised to learn just how many foods already contain it as a flavoring. Since it contains real smoke, many prepared foods like hot dogs, barbecue sauce, and even bacon only contain the liquid version and have never seen the inside a smoker.

With that in mind, it’s easy-to-use your imagination when it comes to the types of dishes you can add it to:

One thing to keep in mind is that liquid smoke is highly concentrated and should only be used sparingly, otherwise the flavor will be too intense and off-putting.

Literally, a tsp or two will be sufficient most of the time. If you think you could have used a little more in a recipe, try adding another drop or two the second time around.

How do BBQ Enthusiasts Feel about Liquid Smoke?

There just may not be a more controversial condiment/ingredient than liquid smoke. Mention it to almost any BBQ enthusiast, and they immediately react like my roommate did a decade ago and tell you that it’s full of chemicals and will give you cancer.

However, this great article by Eater explains how many of the world’s foremost BBQ experts can see how liquid smoke has a home in cooking.

The consensus is that for those of us who own a proper smoker there is no need to use it, however, an apartment dweller on the 22nd floor of a high-rise with no grill or smoker can certainly benefit from it.

5 Recipes that use Liquid Smoke

Now that we’ve covered what it is, how it’s made, and that it is safe to use, let’s look at some recipes you can use it in at home.

One of the most common ways to utilize liquid smoke is to add it to a BBQ sauce that you can apply to your food near the end of your cook. This sauce recipe is for a pretty typical Kansas City style BBQ sauce that is tomato based and is very sweet.

Classic cocktails like an Old Fashioned call for the addition of actual smoke, but it’s nice to try something super simple like the Maple Madness. With only a few ingredients, this drink is very complex with a combination of sweet, salty, and smoky.

This one is great for the apartment dwellers I mentioned earlier. Meathead at AmazingRibs.com has come up with a great recipe for making ribs in your oven. He uses watered down liquid smoke as a marinade for his ribs before they’re cooked, and also adds some to BBQ sauce before they are finished.

There is almost nothing quite as good as a big, juicy hamburger. With two pounds of sirloin for 6 patties, these burgers are guaranteed to be large and full of flavor.

One of my favorite ways to prepare turkey breast is to smoke it. With this recipe you’re able to get close to the same results as you would get in your backyard, while staying in your kitchen. Better still, your turkey will cook up quickly and is great for leftovers served hot or cold. Smoked turkey sandwiches anyone?

So there you have it. If, like me, you’ve ever found yourself asking ‘what is liquid smoke?’ You now know!

So what do you think of it? Or if it’s already in your cupboard, what do you like to cook with it? Do you think it has its place or are the BBQ purists right in thinking it is the worst?

And hey, have we missed anything in this article? Do you have any feedback or questions? Leave us a comment with your thoughts down below, we’d love to hear what you think.

What Is Brisket? Where on the Cow Does it Come From? How to Cook It