Learn what a smoke ring is, what causes it, whether it changes the taste of BBQ at all, and the steps you can take to make sure you get one every time when smoking low n slow. The info in this guide will surprise many of you! 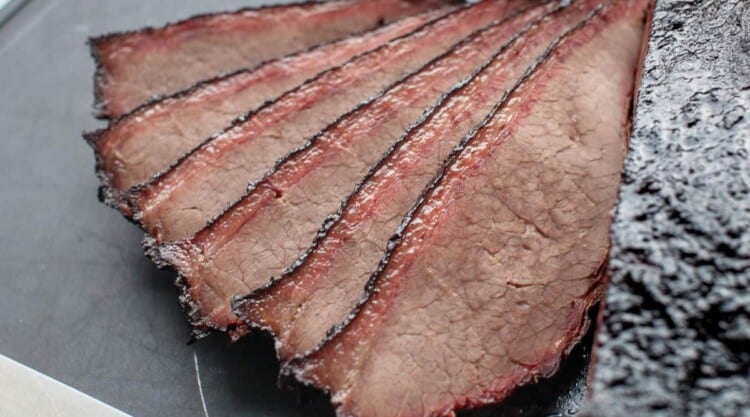 In this article, we’ll uncover the truth about the smoke ring in BBQ, the science behind the magic, whether it’s a mark of skill and quality or not, techniques to help you make one, and even a secret hack for faking one.

The elusive smoke ring is sought after by many would-be pitmasters, and it’s a sure sign you’re an expert griller. Or is it?

I’m not going to use this space to offer my opinion on smoking. (Smoking tobacco, that is.) I will share a memory, however.

When I was a teenager, I knew this one guy who could blow a smoke ring, and it looked amazing. I have no idea if it was hard to do or not (I’ve never smoked), but it seemed as close to magic as I was ever likely to be.

Fast-forward to my adulthood, and the smoke ring is back. Only this time, it’s showing up in barbecued meat! What sort of magic is this?

Let’s find out. It’s all here, and I promise we’re not just blowing smoke.

What Is The Smoke Ring?

If you’ve ever cut into a beautiful piece of meat and found a ring of pink around the interior of the cut just below the surface, you’ve come face-to-face with the smoke ring.

The most common place to find it is probably on a slice of brisket, but it’s by no means exclusive to pectoral cut.

A classic ring is about ¼ inch thick but may be thinner or thicker, depending on conditions.

Is a Smoke Ring Good or Bad?

A local BBQ joint near my place has included a small blurb about the smoke ring on their menu. I guess some folks were complaining that their meat wasn’t cooked enough because it was still pink, or that there was something wrong with it.

The presence of a smoke ring does not mean the meat has gone bad, or that it’s undercooked. The notion that it does, probably seems comical to anyone who “knows” it indicates a perfectly cooked piece of meat.

Well, we hate to burst your bubble, but having a smoke ring doesn’t mean it’s going to be tasty! It has absolutely no effect on the flavor of the food whatsoever, so it’s presence, or absence has no impact on the taste and quality of the food in any way. The phenomenon is merely a natural by-product of the smoking process.

Let’s get scientific for a minute, shall we?

What Causes A Smoke Ring In Meat?

What’s going on here is not magic, but it’s a pretty cool chemical reaction.

Inside the bodies of most living vertebrates, you’ll find a protein called myoglobin. The purpose of myoglobin is to hold oxygen in muscle cells. Animals with a lot of it can hold their breath for a long time. Whales are a good example.

Myoglobin has within it pigments called hemes containing iron that color the muscle, and the more there is, the darker the meat. Whale meat is almost purple. In cows, there’s less myoglobin (they don’t swim an awful lot), so the meat is more of a deep red.

When the animal is dead, and the meat is exposed to the air, the iron oxidizes and loses the red hue. This explains why fresh meat is red but turns brown after it sits out for a while.

There is, however, a way for the myoglobin to stay red (or pink).

Say Yes to NO (Nitric Oxide)

Without getting crazy specific on the science, any Nitric Oxide (NO) in the area binds to the iron atoms. The same goes for carbon monoxide (CO), which is also present.

This prevents oxidation and preserves the pink color. So where do we get NO? From wood smoke. As it envelops the meat, it penetrates the surface, though not all the way. Where it does, it may join forces with the myoglobin to create a lovely pink ring. The more the smoke gets in, the thicker the ring.

Since it can’t penetrate all the way through a thick cut, the innermost portions of the meat turn brown, leaving the signature shape of the ring behind.

How To Get A Smoke Ring on Your Meat

There are a few simple tricks that will increase your chances of coming away from smoking with a lovely ring. Give them a try and see how it goes!

As you’ve probably noticed, green wood puts out a lot of smoke. Seasoned wood burns more easily, but smokes less. For maximum smoke output, you could use a small piece of fresh cut wood in your firebox. However, be very sparing as it also produces creosote and can add an unpleasant taste to food.

According to Dr. Greg Blonder, noted scientist and barbecue expert (he’s like the Bill Nye of grilling — Grill Nye if you will), there is more nitrogen locked up in bark than in the heart of the wood. Therefore, burning bark should lead to prodigious NO output.

Sawdust is popularly used to add smoke flavor to a charcoal-fueled fire. Unfortunately, it doesn’t burn much before it starts smoking, so it doesn’t release a lot of NO. Minimize sawdust use for the maximum ring.

Did Someone Say the B-word??

Yes, I know briquettes are the Devil in disguise to many smokers, but they have their uses! For instance, they are chock-full of nitrogen. Adding some of these to your fire should definitely increase your chances of an Instagram-able smoke ring.

Sorry, lump charcoal aficionados — there isn’t much nitrogen in the best hardwood lump charcoal, it’s almost entirely carbon. You’ll have to switch out if you’re after the ring.

If you want to try this trick, we have a guide to the best charcoal briquettes available today.

You’ll find that NO adheres better to a wet or tacky surface. Makes sense — most things do.

Spritz your meat during cooking, or mop it with sauce, to keep the surface damp. This will allow the NO to stick to the surface, and then penetrate to create the ring.

Does your cut have a fat cap? Carve away excess fat to expose the meat to make it easier for the nitric oxide to seep in. Don’t overdo it, though — fat still equals flavor!

Same goes for a dry rub. If you thoroughly coat your meat with a seasoning crust, you won’t get good smoke penetration. Spread it a bit thinner if you want to be in the pink.

Intriguingly, starting with cool meat gives you a better chance at forming a ring.

According to smart people who figure these things out, the permanent browning process of myoglobin starts at about 140F. It’ll be full-on brown by about 160F.

That means you need to get the maximum NO contact before you get to 140F, or else there won’t be much pink left to preserve.

Starting with cooler meat means more smoke will hit the meat before it gets up to the critical temperature. I’m not saying toss in a frozen brisket, but don’t wait until it’s at room temperature, either.

Go Slow for the NO

As mentioned above, past about 160F the myoglobin has totally given up, and there’s no way to make it pink again. The longer it takes to get to that temperature, the more time there is for the NO to do its job.

How to Fake A Smoke Ring

Haven’t got the patience/interest/supplies to make a smoke ring, but still, want to put on a good show when you carve? Here’s a hack to help you fake it ‘til you make it.

It’s not the smoke itself that creates the ring; it’s the nitrites and nitrates in the NO in the smoke. So, it stands to reason that if you could artificially introduce these elements, you’d end up with a “smoke” ring without smoke.

Naturally, I’m not the first person to figure that out. Commercially available curing solutions, like Morton’s Tender Quick, have the necessary ingredients for creating a smoke ring. Actually, you can go way beyond the ring; corned beef and wieners are pink all the way through because they’re cured with products like this.

Mix a small (tiny — and be safe, high amounts can be toxic!!) amount of the curing agent into your dry rub or brine to fake your own ring.

Be warned, though — people who really know barbecue are like art experts; they can usually spot a fake a mile away.

So, Is A Smoke Ring A Sign of Great Barbecue?

A beautiful, pink, even smoke ring looks terrific, and many competition crews try to pull one off.

Judges and “knowledgeable” eaters are always on the lookout for it and question the pitmaster’s skills if it’s not there.

The truth is, though, it adds precisely nothing to the flavor except the perception of a job well done.

It’s entirely possible to smoke a cut to perfection and have not even a trace of a ring. On the flip side of that, you can execute a perfect ring, but still overcook, dry out, or in any one of a million other ways ruin your meat.

So, while it looks great, and the appearance of it may convince us we’re eating quality meat, in the end, the smoke ring is nothing but a beautiful illusion.

And with that, another article wraps up. I’m sorry if pulling back the curtain spoiled the magic of the smoke ring, but hey, it still looks great!

The critical thing to understand is that while good aesthetics are a noble and even desirable outcome, you’re not a lousy griller if you never make a single ring.

If you have a friend who’s trying to make his or her own smoke ring, help them out and put this article in front of them. You could also send this to anyone you know who is disproportionately proud of theirs!

If you have any comments or questions, or tips and tricks that we’ve not mentioned, please drop them in the comments section below, so we can learn from each other.

Now to vanish like a puff of smoke. See you next time!