Spritzing Ribs on the Grill — Is there Really any Point? Let’s Find Out

Spritzing ribs is said to add moisture, flavor, and help in bark development. Is this true? Are there really any benefits? We did some research on it, and below you can see our findings, how to get the best results when spritzing ribs, and some tips from the experts. 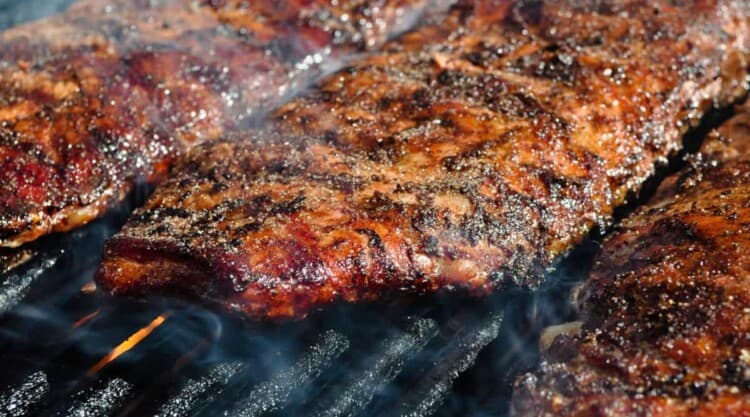 There’s nothing more disappointing than pulling a rack of ribs off the grill and cutting into them only to find they’re as dried out as last year’s wood.

Even a low-and-slow fire can rob ribs of what little moisture they have.

Some people swear by the technique of ‘spritzing ribs’ to prevent them from drying out. But is there really any benefit?

To avoid the fate of dried-out ribs, smoke-meisters have come up with different ways to ensure if they hold onto as much moisture as possible during the cooking process.

Water pans, foil wraps, and miniature mops are the tried and true methods used. But another popular and simple, but effective way is spritzing.

To spritz is to spray something in short, quick bursts.

A food-grade spray bottle is all that’s needed. What goes into the bottle can be a simple or complex mix, one ingredient or several.

Spritzing aims to replace moisture lost to the heat of the smoker.

What Is the Theory Behind Spritzing Ribs?

Enthusiasts say spritzing ribs as they cook improves their flavor, tenderness, and color.

The running theory is that cool liquid meeting hot meat will keep the meat from burning. And no burning means a nice barbecue brown color instead of a dark, singed, dried-out color.

Another reason to spritz is to keep the meat moist so as much smoke as possible will cling to the ribs throughout the cooking process.

It’s much the same theory behind using a mop sauce on larger cuts, just sprayed instead of mopped on.

But Does the Theory Hold True?

Some say the spritz will cool the temperature, so the sugar in the rub won’t burn.

But then you’re supposed to spray an apple or pineapple juice mix on the meat so… spraying sugar water on sugar rub will cool the meat enough to keep the sugar from burning? Not following that logic; how about you?

And it’s true that the moister the cooking surface, the better smoke will cling to it. Lightly rewetting the surface throughout the cooking process, especially if you’re not using foil or a water pan, can deliver a deep smokey flavor to your ribs.

And while we’re on the subject, make sure you choose the right woods for smoking for your ribs. Not all are suitable!

The Spritzed Vs. Unspritzed Rib Test

In the following video, Chef Tom of All Things BBQ did a comparison to see what difference there could be between spritzed and non-spritzed St. Louis slabs of ribs of equal weight and size.

The unspritzed ribs were 15-20 degrees hotter than the spritzed ones throughout the cooking time. They also finished an hour ahead of the spritzed ones and were pull-off-the-bone tender with a nice crusty exterior (known as the bark.)

An apple juice / apple cider vinegar blend was applied to the other slab of ribs 45 minutes into the cooking time and every 30 minutes for the duration of the cook.

The apple juice and longer time on the fire turned out ribs which were darker in color and stickier (due to the apple juice). The exterior wasn’t as crusty as the unspritzed rack. The spritz couldn’t be tasted at all, and Chef Tom felt the flavor of the rub was diminished.

Both slabs turned out well-smoked, tender, and had a beautiful color. But in this contest, the unspritzed ribs came out ahead (literally) of the spritzed regarding taste and texture.

What the Pitmasters Say

Wayne Mueller states he’ll only spritz under severe conditions, like a very gusty day or having a gun held on him.

Melissa Cookston achieves a color and moistness without a spritz bottle, preferring to wrap them in foil with apple juice (the Texas crutch.)

Tips for Spritzing Ribs and Getting the Best Results

Time Doesn’t Have to be Your Enemy

To perfectly smoke ribs, a low-and-slow cook over a period of hours is required. Across those hours lies the potential for the meat to dry out.

Generally speaking you will smoke ribs for between 4 and 7 hours, depending on the types of pork ribs you have and your chosen method of cooking, and for some of the different types of beef ribs, for example chuck short ribs, they can take up to 9 hours, as seen in my smoked beef short ribs recipe.

If you don’t have a ceramic smoker capable of creating an air-tight and humid environment for the duration, or a water pan inside your smoker during the cook, you might benefit from the spritzing method to add moisture.

Too much spritzing will wash off the rub. It’s one of the chief complaints about spritzing. For this reason, simply using water was abandoned a long time ago.

In Chef Tom’s competition described earlier, perhaps the outcome would’ve been different if cider was used instead of apple juice. Maybe some of the rub added to the spritz would’ve upped the flavor of the spritzed ribs.

On a practical note, if you decide to use rub or marinade in your spritz, be sure to strain the solution before it goes into the bottle. This will prevent tiny bits of seasoning from clogging the sprayer.

Avoid Watering Down The Flavor

However much care you’ve put into your marinade and rub, you don’t want the flavor impact watered down on the grill.

If you’re careful to keep the spritzing to a mist and play with various flavors, you may appreciate what spritzing can do for your ribs.

Since the goal is to enhance, not cover, the taste of the meat, you probably don’t want to get too creative with spritz mixes.

As a general rule for everything smoked or grilled, ignore the temptation to go all out and try crazy combinations. Never let what goes on your foods take away from their inherent flavor.

Through marinade, rub, and spritz, the goal should be to complement the flavor of your ribs.

Spritzed ribs will have a looser texture because of the regular supply of moisture. You may find the interior to be slightly moister and softer than if you didn’t spritz them.

The Look of Spritzed Ribs

The longer cook time means a darker crust because the sugar in the spritz and the rub have longer to caramelize.

You may find variations of color will result depending on the spices, liquids, fats, and alcohols in your spritz solution.

For the most part, spritzes are basically sugar water mixes sometimes fueled by fats, vinegars, or alcohols. Some will add in a bit of the marinade or dry rub. The three top spritzes we found:

If you subscribe to the ‘if you’re lookin’ you ain’t cookin’ school of thought, you’ll want to go the water pan or Texas crutch method for holding moisture close to your ribs as they smoke.

But if you’re not a fan of foil, and you’re okay with interrupting the humid, smoky atmosphere to reposition the ribs or to check the temperature (you don’t have a remote wireless thermometer??), spritzing is the thing for you.

What’s your favorite spritz recipe? Sharing’s caring, so please drop it in the comments below.

3-2-1 Ribs Method: A Countdown to Smoking Perfect Ribs Every Time

How Long to Grill Ribs — For Perfect Bite and Texture