You often see pitmasters mopping their meats partway through cooking. But why? What are the benefits? Is it recommended for all cooks, or only for certain meats, or during the use of specific BBQ methods? Let’s find out, and look at some of our favorite mop sauce recipes. 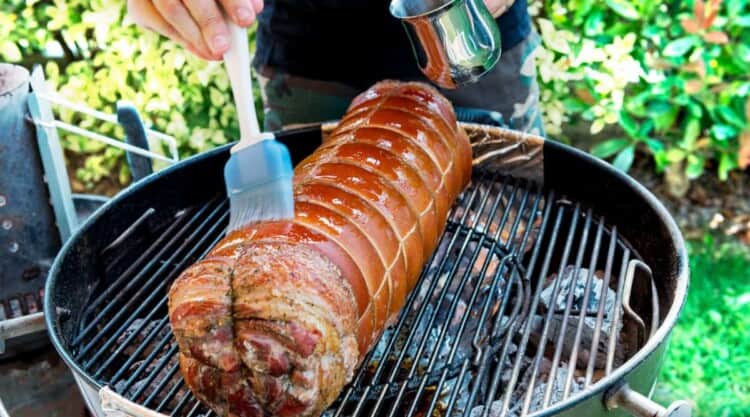 A BBQ mop sauce is really as simple as the name implies. It is a thin sauce that you apply to the meat while it’s cooking, usually by way of using a miniature mop, though of course, a small brush does the job just as well.

Mop sauce is steeped in barbecue culture. It’s commonly used on large cuts of meat such as pork butts and ribs, but in particular, it’s common to use when cooking the whole hog.

When cooking whole hog, the pig is butterflied and cooked over charcoal or embers burned down from logs of wood.

The mop sauce is made in a large bucket, and a literal kitchen mop is used to soak up the sauce and disperse it over the whole hog quickly and easily.

While many of us will never cook a whole hog, lots of us will use a mop sauce when we’re cooking, and perhaps a miniature mop, but never a full size one!

What is a Mop Sauce

A mop sauce is a thin, flavored liquid that you mop over some of the larger and best meats for barbecue smoking, to add flavor and moisture to the cook.

Mop sauces often have a base of apple cider vinegar, beer, apple juice, or other thin liquid, with various types of spices added.

Some recipes are straightforward with only 2 or 3 ingredients, while others can have upwards of 15 – 20 ingredients for those who feel adventurous.

Why Use a Mop Sauce?

While lots of backyard barbecue aficionado’s swear that you have to use a mop sauce if you want to make good ‘que, many of them wouldn’t be able to explain their reasoning for doing so eloquently.

Let’s take a look at any benefits of its use:

Right at the top of the list, the number one reason to use a mop sauce is to add another layer of flavor to the meat as you are cooking it.

If the mop has a lot of tangy flavor from vinegar, it can play well with a sweet rub on the meat.

If you are using a mop that has a lot of sugar in it, you can help create a delicious bark on the exterior of the meat as it cooks and the sugar caramelizes.

As strange as it sounds, using a mop can result in a smokier piece of meat.

Smoke sticks better to a wet surface, so by periodically basting your meat with a liquid, you will allow more smoke to stick to your meat more easily, and potentially help with the creation of a smoke ring too.

Any Cons to Using a Mop Sauce?

Just how using a mop sauce can improve your barbecue, it can also have some negative connotations that should be considered.

I know what you’re thinking, “Wait! You just told us a major reason for us to use a mop sauce is that it adds flavor!”, and while that’s true, applying too much mop sauce too frequently can result in any dry rub that was applied prior to the cook being washed off.

By adding a cold mop sauce to hot meat you will reduce the temperature slightly on the meat, resulting in a longer cook time. You will also be opening the grill to apply mop sauce, and this lets heat escape which also adds cooking time will the interior of the grill comes back up to temp.

We May be Spreading Germs

Most bacteria that sit on the surface of the meat will die when the temperature of the meat reaches 155 °F, so usually we will have no concern. However, if you use a mop prior to the meat reaching that temp and place your mop/brush back into the mop sauce, you are contaminating said sauce.

This can be avoided by either never using the same brush/mop more than once (a bit cumbersome and unrealistic), or by ensuring that the meat is allowed to come up in temperature after you mop it for the last time.

When Should You Use a Mop Sauce? What Type of Meat?

We pointed out earlier that the three most important things a mop sauce does, is add flavor, improve bark, and helps smoke adhere.

From this, we can deduce that a mop sauce is best used for large cuts of meat that are being cooked low and slow over long periods of time.

Cuts like brisket, pulled pork, and ribs are great for using a mop sauce on. The extra layer of flavor is welcomed, they benefit from having a great, crusty bark on their exterior, and they pair well with wood smoke.

Meat that is being cooked quickly at a high temp like burgers or steak won’t see the same benefits, and meat that is skin-on like chicken or turkey doesn’t form a bark when cooking.

Pork shoulder vs pork butt, what is the difference?

How Do You Use a Mop Sauce?

Okay, you’ve weighed out the pros and cons, you’ve picked out the perfect cut of meat to barbecue, you’ve researched and found the ideal mop sauce recipe, but how the heck do you use it?

Well, remember what we’ve learned: It’s best not to be too heavy-handed when applying our mop sauce so not to wash off too much of our rub or marinade. We also want it to help form a delicious bark, so we should wait until the bark has started to form a little before we apply our mop.

As for how many times, we would advise applying a mop 3 to 5 times during the cook at regular intervals. If you’re planning to cook for 4 hours, you can apply the mop sauce every hour or so, if you are grilling for only an hour then mop the meat every 15 to 20 minutes.

Need some help coming up with a killer mop sauce of your own? Have no fear! Here are some of the most popular mop sauces we found around the web.

Brought to you by the venerable Jess Pryles, this sauce is rooted in the Eastern Carolina tradition of serving pulled pork with a heavy vinegar based sauce.

With added spices like brown sugar, chili flakes, paprika, and mustard, this sauce has a great balance of sweet with spice and savory that can easily cut through the rendered pork fat.

In Memphis ribs are king!

They start by applying a heavy paprika based rub, and they smoke them hot and fast while frequently mopping them with a simple sauce consisting of apple cider vinegar, water, and the same spice rub used on the ribs. The end result is a rib that is not hidden under a thick red barbecue sauce allowing the meat to shine through.

In Texas beef is king, and while many don’t think of beef when they think of mop sauce doesn’t mean that you shouldn’t consider it. In many traditional Texas barbecue restaurants, the food is cooked directly over the pits, and you have to use a mop to keep the food moist to keep things from getting too hot.

With a long list of ingredients, including beer, cider vinegar, steak sauce, cumin, chopped onion, garlic, bell pepper, and butter this sauce is complex and so very Texan.

With only apple cider vinegar, Worcestershire sauce, lemon juice, and black pepper, this sauce is incredibly simple and would pair well with pork and poultry alike.

If this recipe is a little too large, you can halve or quarter the ingredients to make a smaller batch.

We hope you’ve enjoyed this article!

Do you have a favorite mop sauce that you just can’t barbecue without? Feel free to tell us all about it in the comments down below!

As always if you liked this article, please share it on Facebook and other social media sites, we’d really appreciate it!

How to Reheat Brisket — Keeping it Moist, and None of That ‘M’ Word!