What Is Brisket? Where on the Cow Does it Come From? How to Cook It

The popularity of brisket has exploded in recent years. But what exactly is it? Where does it come from on the cow, and why is it suddenly so popular? In this guide, we answer all these questions and tips on to cook and serve it. 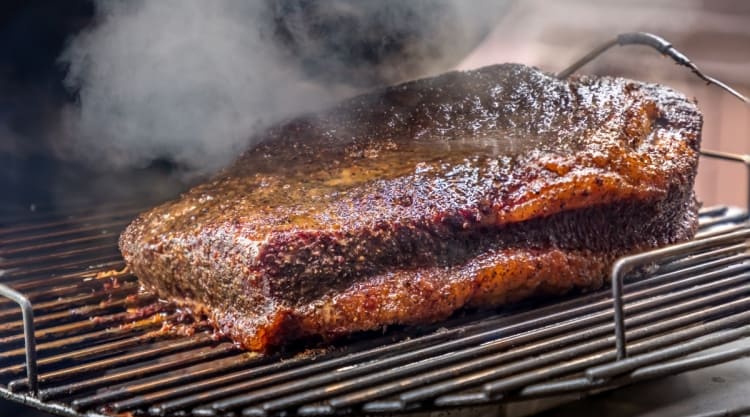 In this article, we’ll answer the question: What Is Brisket? We know it’s one of the best meats for smoking, but exactly what is it? Where does it come from? What is the history of use for this cut of meat?

Vikings called it gristle or cartilage. In Old English the word is brushk, meaning tough. You can just see a lot of serious gnawing going on, right? Yeah, good times.

But the brisket we know and love today is, well, centuries beyond what was served in drafty dining halls along with tankards of mead and ale. And thankfully so.

So let’s dig in, and along the way take a close look at one of the best transformation stories in meat cooking history.

What Part of the Cow is Brisket?

Brisket comes from beef (cows or steers aged 2-years and up) or veal (milk-fed beef calves aged 2 to 4 months).

Cattle don’t have collarbones which help support the body’s weight, so these pectoral muscles are all that’s keeping the front half of a 1,200 to 1,400-pound animal off the ground. Supporting about 60 percent of the animal’s weight calls for dense and tough muscle. Which is why it consists mostly of connective tissue.

You can see where the brisket comes from on the cow, and many tips and tricks from the pros on how to prepare and cook a brisket, in the following video from Jess Pryles:

What is Connective Tissue?

Found in tendons, silverskin, and ligaments is a rubber band-like material which mainly works to hold muscle fiber and sheaths together. Also called cellular glue, they give shape to and strengthen tissues. There are two forms of connective tissue –

A protein that is flexible and, well, elastic — able to stretch and resume its original shape. As it loses moisture through aging or the cooking process, it can become brittle, tough, and unchewable — and called gristle.

The most abundant type of protein in all mammals and one of the strongest.The Accidental Scientist of Exploratorium.edu explains collagen’s rope-like structure of 3 molecule chains braided together hold fiber and sheaths together. It also makes collagen strong.

It’s found in abundance in the legs, rump, and chest in cows and pigs. It turns into gelatin in the cooking process.

The gelatin gives the meat a silky, moist texture. Besides connective tissue, collagen is found in ligaments, blood vessels, bone, and skin. Yes, the very thing whose absence brings on wrinkles and crêpey skin.

This combination protein team is the reason beef brisket must be cooked low and slow. The connective tissues relax, allowing water to evaporate instead of being squeezed out like wringing a sponge. And it takes time for the collagen to break down with long exposure to heat, to eventually become gelatin.

Three Cuts of a Beef Brisket

As discussed in more depth in our article on brisket flat vs point, brisket is supplied 3 different ways:

This is the whole brisket cut, made up of the two different muscles combined that are the Flat and the Point separated by a layer of fat. It weighs between 8 and 20 pounds. A layer of fat covers the top; this fat cap can be trimmed to ¼ to 1 inches.

This is the main part of the brisket. Also known as the first or flat cut or the deep pectoral, it lies toward the inside the cow, against the ribs. Being worked the most, it is lean, or low on fat content. It’s typically used for corned beef and pastrami.

This is the lower portion which sits ‘outside’ above the leg, it is the superficial pectoral. Also called the fat end or second, point, or triangular cut. It’s typically used to make beef burnt ends.

Where to Buy Brisket Online

Brisket is available in two tiers at Snake River Farms:

The marbling score of black grade briskets is greater than that of USDA Prime. This Wagyu cross beef is raised in the Pacific Northwest’s temperate climate, resulting in briskets with naturally rich marbling and exceptional flavor.

Snake River Farms’ Gold Grade briskets are their most premium line, with more intramuscular fat and marbling than their Black Grade briskets. So you can expect them to be rich and buttery, with a tonne of deep umami beef taste.

Briskets from Snake River Farms range in weight from 9-12 lbs to 20+ lbs.

‘Packer brisket’ and ‘whole brisket’ are the two varieties of brisket available at Porter Road.

Both briskets are richly marbled and tasty, so they won’t let you down. Porter Road’s briskets are delivered frozen to keep them fresh.

Where the Fat is and How Much to Trim

Fat should be white in color and evenly distributed throughout the brisket, advises Chefsteps.com, a resource for professional chefs. The website displays a good picture of what not to get.

Never completely remove the fat. As discussed in our article on whether to smoke brisket fat side up or down, it’s important for the cooking process, helping to prevent drying out. If having the brisket professionally trimmed, the terms to know are:

The fat and the low-n-slow cooking method are what make the difference between gnawing gristle with great exertion and chewing brisket, relaxed and blissfully happy. Check out our guide on how to trim brisket for how to get the best results.

Keep reading to learn how the toughest part of the cow became the most prized.

Softening Up One Tough Customer

There was a time when tough, chewy, and stringy were commonly used words to describe a cooked brisket. So it was left behind at the meat processing plant. No one believed anyone would buy it on purpose. But there’s always someone hungry enough to take what’s considered the worst of meat and put it to the fire.

At some point in time, it was ‘discovered’ that the low-and-slow cooking method — perhaps boiling, stewing, or roasting — transformed those dense muscle fibers into a delicious, tender cut of meat.

Smoked brisket dates back to the late 17th century here in the States when Eastern European and Jewish immigrants traded ideas with local ranchers.

But it wasn’t until the 1960s that brisket became a standard cut commercially sold to restaurants and stores. By the 1980s, demand for it skyrocketed, and lines at restaurants with it as the main attraction began extending around the corner. There are many workshops and even more competitions devoted to brisket, with it becoming almost synonymous with Texas barbecue.

But there’s more to brisket than the smoker. There are two preservation methods (one wet, one dry) which turn it into two cultural favorites: corned beef and pastrami.

A Word on Corned Beef

Coarse rock salt looks more like grains or seeds than teeny crystals issuing from a nearby salt shaker.

Sometime back in 1570 or 1580 AD came the first recorded use of the word “corned” used to describe meat being preserved in a bath of salt.

This wet preservation method usually also includes things like peppercorn, garlic, and cloves. Today we call it wet brining, or curing. We’ll take a more detailed look at this another time.

A Word on Pastrami

“Beyond the brine lies the smokehouse” could be the subtitle for The Story of Pastrami.

The name comes from the Romanian word pastrami taken from pǎstra, which means to preserve. This delicatessen staple takes the dry preservation route of a salt and spice cure followed by a stint in the smoker.

The trademark pink color comes from the curing salt. This one also deserves its own article, so more on this later.

The Many Ways to Bring Out the Best in Brisket

Brisket in the Smoker

We discuss smoking brisket at length elsewhere, so, for now, we’ll just say that the process of seasoning (marinade / brisket injection), smoking (1 to 1 ½ hours per-pound at 250° F) and slicing brisket correctly leads to wonderful results.

Brisket in the Oven

Pot roast is another cultural favorite rendering of brisket. Quality time in the oven or slow cooker with carrots, onions, and — okay, I’ll stop drooling if you will.

Another cultural favorite, Betty Crocker, recommends for a 2½ to 4-pounder, roasting for 2½ to 3 hours covered in liquid at 325 °F until the internal temperature reaches 135° F. For a well-done brisket, carryover cooking should bring the heat up to 170° within 15 minutes.

Clint Caldwell of AmazingRibs.com explains the brisket will shrink by at least 40 percent in this cooking process.

After seasoning, the meat is placed into a heavy plastic bag and then vacuum-sealed. The airtight package goes into the water-filled sous vide cooker where the low, steady temperature gently cooks the meat, turning it pink. It can be served to the table straight from the cooker, but some will put a crust on it by searing it in a dry skillet on the stove or under the broiler for a few minutes.

Clint explains how to create smoked sous vide brisket, a true study in patience: After trimming, dry brine the cut for 12 to 24 hours, sous-vided for 30 hours, and then rapidly chilled in a 50/50 ice-water bath for a mere 30 minutes. At this point, it can be frozen or refrigerated until grill time.

Then, a 2-zone grill or smoker is fired up, the brisket leaves its plastic pouch and goes on the grate to be smoked for an hour at 225° F. Strain the juice in the bag to create an awesome sauce. And then, it’s done.

Is There a Right Way to Serve Brisket?

Yes. We’ve devoted whole articles on cutting and serving brisket, so we’ll be brief here. Having so much connective tissue, a beautifully smoked brisket can be ruined by what happens at serving time. You’ll want to:

A Final Word on Safe Brisket

There will always be a variety of temperature recommendations for cooking meats. The Food Safety and Inspection Service (a division of the U.S. Department of Agriculture) is the official setter of food cooking and storage guidelines for the country. For brisket:

The picture painted of beef’s toughest muscle group is no longer the gray-tinted, cold and windy scenario of tough customers relentlessly gnawing on tough, leathery meat. Oh, no. The picture is warm — the blue smoke, the pink of a smoke ring, and the deep brown of an awesome crust.

Brisket is the whole point of having a smoker, some would say. In its many forms — pastrami, corned beef, or pot roast — it has staked a permanent place on the American menu. Tried and true recipes can make way for the inventive.

We hope you enjoyed your journey through beef brisket history and will share it with others. If you have a favorite recipe, please share and encourage more of this wonderful cut at the table.

What is Wagyu Beef? What Makes it so Special and so Loved?