Cutting against the grain gives an entirely different ‘mouthfeel’ to meat during eating. It can be the difference between the same cut of meat feeling tough or wonderfully tender. So learn how to cut against the grain in our guide to getting the best results from meats you cook. 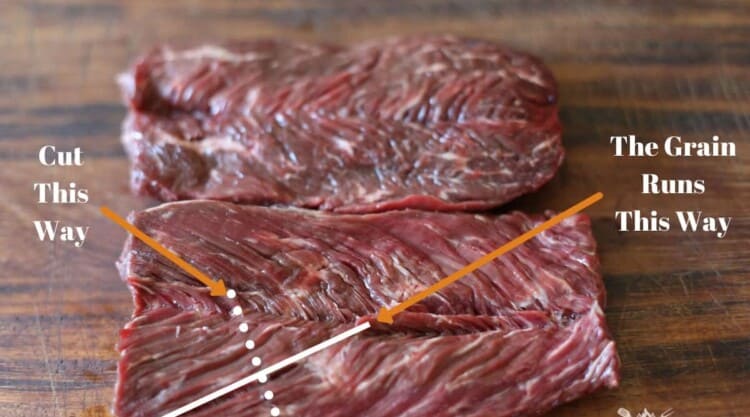 In this article, we’re going to discuss precisely what cutting against the grain is, how to identify the grain, how to cut against it and why you should do so.

English is a funny language. The same word, pronounced the same way, can have multiple meanings. Like the word grain. It can describe:

For our discussion here, we’re going with the fourth definition. Grain, explains J. Kenji Alt-López of SeriousEats, is the direction the muscle fibers run in meat.

Depending on the cut of meat, the grain can be small enough that figuring out which direction to cut is irrelevant. But it matters with cuts of hard-working muscle containing large fibers.

As discussed in our brisket carving post, meat is made up of bundles of fiber. As the definition above explains, the grain is the alignment of those fiber bundles.

Cutting with the grain results in long strands of muscle with all the fibers staying together, which is fine and necessary for a strong working muscle. But for your plate, it just means tough, chewy meat.

How Tough is Tough?

Times four, according to an experiment Kenji references in the article linked to above.

As you may know, flank is an inexpensive cut of lean beef, taken from the stomach just in front of the back leg. Being both a hard-working muscle and lean, it can be pretty tough if not properly cooked and carved.

The folks at America’s Test Kitchen used a gadget called the CT3 Texture Analyzer to test the amount of force needed to bite through a slice of flank steak.

The slice that was cut with the grain was four times harder to cut than the cut sliced against the grain. The test also found the ‘against the grain’ flank steak to be as tender as a more expensive cut of beef.

If you’re still not convinced, and/or are a fan of geometry like Kenji, you’ll no doubt enjoy his explanation, complete with equations, as to why cutting on the bias matters so much.

How to slice tri-tip

Are We Being Too Fussy?

If you go with the grain, will your steak be chewable?

Yes. But there are better ways to give your teeth and jaws a workout. Like a good piece of jerky.

And it’s a matter of pride! Do you really want to be known as the griller of tough meat? It could make someone question your grilling prowess.

And It’s Good for You

Before the meat hits your mouth, cutting against the grain starts the digestive process, explains Kelly Foster of TheKitchn.

Those shortened fibers are easier for teeth to break down into a mush safe enough to swallow and be properly assimilated by the body.

If you’re thoroughly convinced now, read on to see how to go against the grain.

Which Way is the Grain?

The meat has tiny horizontal lines running across its length. If you see this on your first cut, turn the meat 90 degrees and try again.

Instead of those smooth lines, the meat has a fractured appearance — tiny octagons, diamonds, and weird triangles scattered at random or in bunches across the cut. It may not have as neat an appearance, but your teeth will smile.

The following video from ‘Cooking Light’ provides clear visuals, so you don’t end up cutting against the grill marks instead of the grain.

This principle goes beyond the brisket discussed in another post. Other strongly muscled cuts of beef, such as the skirt, flank, or shoulder can yield tough and chewy or tender and moist cuts. It depends on which way you cut your beef, or pork, bison, mutton or any other four-legged mammal.

Poultry Has a Grain, Too

Slices of a turkey, chicken, or other bird are also better when cut against the grain. This requires going against the picturesquely traditional approach of slicing along the sides. Though you can’t see it beneath the bird’s skin, that’s the direction of the grain.

To properly carve poultry, start by disassembling it. Have a platter ready, use a good knife, and a cutting board with a ridge to catch the juices.

Consider the bone as running north-south. Remove it and angle-slice east-west. Set bone aside for bone broth.

Stand on its end and remove meat by making straight cuts down, going around the bone. Remove little bones. Use the same strategy as for the thigh.

Cut along the line of the breastbone until you reach the ribs. Angle the knife to finish the cut that will separate the breast from the carcass. Repeat on the opposite side. Consider the long side that lay against the breastbone as north-south. Turn the breast 90 degrees and angle-slice.

Arrange meat on platter(s), strain juice and thicken for gravy/sauce or pour a small amount over the platter.

The back and wings, being more bone than meat, are better left whole. Separate flat from tip, if no one wants to nibble on the tip, toss it in with the bone for broth.

In sum, short muscle fibers = tender meat. If cutting against the grain is the cake, cutting on the bias is the frosting.

Being Rightly Partial to a Well-Presented Plate

You may see “bias cut” in instructions for carving meat or poultry. Yes, it’s time for more fun with English!

Definitions for bias cover trends, unreasoned feelings or opinions, and there are a couple of incomprehensible scientific definitions too.

The one we want, though, refers to a diagonal line of direction. In this case, we’re considering the angle of the knife’s down stroke.

Cutting vegetables (and meats) on the bias allow you to get ‘larger looking slices’ from thin items, which really improves their presentation (and we eat with our eyes, right?) It also reduces cooking time for stir-fry.

Video: Cutting against the Grain and on a Bias

In this video from ‘McNacksKitchen’, they again demonstrate how to identify the grain and cut against it (you should be a pro after 2 videos in this one article!) and also how to cut on a bias to improve presentation:

In summary, to cut on a bias:

While some will say cutting on the bias is for purely artistic reasons, Professor Griffin of Texas A&M University says it is another way to shorten further the muscle fibers which means enhanced tenderness.

It also increases the surface area of the slice, which means enhanced flavor.

A sharp, non-serrated slicing knife, a good eye and sense of direction, make for the perfect cut of meat, to get ramp up the tenderness.

Not paying attention to how you cut the meat, can make the same cut that would have been tender, feel stringy and chewy, all because of just the way it was cut.

Therefore, cutting against the grain is a simple technique for bringing out the best in your grilled or smoked foods, it’s something everybody should learn to do.

BBQ Myths Debunked — 41 Things You Thought You Knew About BBQ

More From General How Tos

What is Broiling? Can You do it on a Grill or BBQ?