After hours of nursing a brisket through a low n slow smoke until perfect doneness, you don’t want to miss any trick when it comes to serving. You need to slice a brisket against the grain to get the most tender mouthfeel. Here’s how to cut a brisket correctly for the best results. 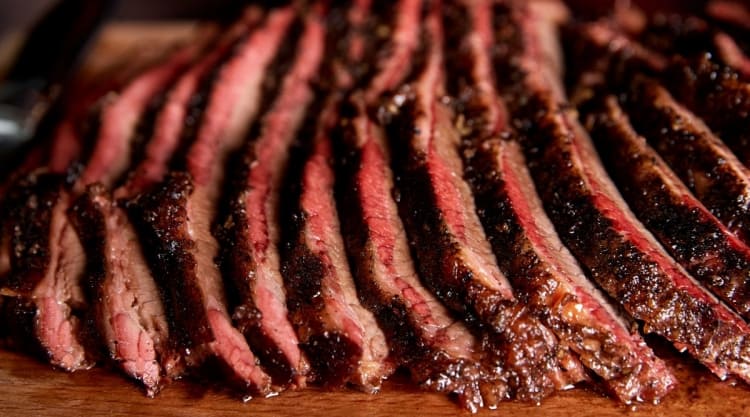 In the Land of Grill, brisket ranks high among the nobility. Taken from the lower chest of a steer, this heavily worked muscle duo were ignored — thrown away — for many years because the meat has such a tough texture.

But then someone discovered how to prepare and cook it right — tender and juicy — and meat lovers everywhere rejoiced.

After the careful selection at the store, the seasoning, the fire, choosing charcoal, wrapping, and resting, your brisket stands ready for the very best part — the eating.

After it’s sliced, that is.

Slicing your brisket is where all your hard work can end in crushing disappointment. It must be done in a certain way.

How this is done can mean the difference between serving slightly stringy, tough, chewy beef you’ll want to hide under sauce, or serving moist, tender slices of a marvelous cut of meat slow smoked to perfection.

If you like the sound of the latter, keep reading and learn how to slice a brisket for maximum tenderness when serving.

About a Brisket and Why How You Slice Matters

The brisket is a combination of two slightly overlapping muscles.

One muscle is lean — called the flat — and the other is relatively fatty — called the point, or the deckle. The two are attached by a layer of connective tissue and fat between them.

When you buy a whole brisket — known as a packer — you are buying both the flat and the point still connected.

Briskets are complicated to cut properly because the grain of the muscle meat in the point and the flat run in different directions in a whole packer.

Cutting Against the Grain

When it comes to serving up a brisket, you’ve probably heard the instruction to ‘cut against the grain.’ While you’re sure what the cow ate isn’t being discussed, you may be a little vague on what this actually is. So, what is the grain?

Meat is made up of long bundles of muscle fiber. The grain is how those fiber bundles are aligned, explains Kelly Foster of TheKitchn.

Muscle fibers are incredibly strong, and hence tough and chewy. If you take a piece of raw meat, you can see the grain of the muscles much like you can in a piece of wood.

If you were to try and pull the muscle fibers along the grain, taking each end of the grain and pulling apart, you would not be able to break them. After all, it is the muscles job to stretch and contract, sometimes moving extraordinary weights in the animal. Muscles wouldn’t work if they tore so easily.

However, muscle fibers are easy to separate. If you rotate the piece of meat 90 degrees that you couldn’t pull apart end to end, and tried to rip the meat apart against the grain, separating the individual fibers rather than trying to tear them end to end, you will easily be able to.

So the goal when you slice a piece of meat is to ‘cut against the grain,’ leaving very short muscle fibers end to end, which are easily separated by your teeth when chewing that can be easily swallowed and digested. The meat feels much more tender.

If you sliced ‘with the grain’, you would serve long and intact muscle fibers that are tough to chew This is because you’re no longer separating the muscle fibers by chewing, you’re having to try to tear and cut the individual and strong fibers across their length. This is hard to do and makes the meat feel tough.

By cutting against the grain, you’re starting the process of breaking up the fibers. The fibers are magnitudes shorter, fall apart more readily and hence are easier to chew.

Cutting with the grain has the opposite effect; the fibers are kept long and together. That’s good for working muscle, bad for meat. It’s a sure-fire way to ruin a good (and expensive) cut of beef!

I remember many years back when I first learned about cutting against the grain. It was a revelation. The difference in mouthfeel, and how tender meat feels just for slicing across the grain is surprising, and amazing. Learn the technique, and use it with all meats. You’ll be sad you never learned it sooner.

Yes, It Really Does Matter

How much difference can cutting with, or against, the grain make? This question was answered by Dan Souza, Senior Editor of Cook’s Illustrated in an experiment at America’s Test Kitchen using a flank steak.

A sensitive instrument, the CT3 Texture Analyzer, was used to measure the amount of force needed to bite into the steak; one slice cut with the grain and one cut against.

Yes, for tender cuts of meat, you must pay attention to the grain. Here’s how.

A video Demonstration of How to Cut Brisket Against The Grain

Every year the University of Texas A&M collaborates with Foodways, an organization dedicated to preserving, promoting, and celebrating the diverse food cultures of Texas, to put on Camp Brisket, a 2-day exploration of every aspect of this beloved cut.

Aaron Franklin, known as the top brisket guy in the world is featured. In 2014, he demonstrated the proper way to cut a brisket, as seen in the video below.

How to Slice a Brisket For Maximum Tenderness — Step-by-Step

The video above should be easy enough to follow for how to cut a brisket for maximum tenderness when serving, but for those who prefer written instructions, we offer this below.

Setting Up for the Cut

When cutting, you’ll want to preserve the crunchiness of the bark on brisket, while avoiding tearing it and the meat.

While it is possible to get a good clean cut using a sharp carving or chef’s knife, Aaron’s choice is a long (12-inch) sharp knife with a serrated edge. The longer the blade, the fewer the strokes needed. The fewer the stokes needed, the cleaner, neater looking slice with the bark intact.

Cutting is not a process to speed through. It’s too easy to end up shredding the bark off and having a messy looking slice. And an electric knife? No. Just don’t.

If you don’t already have a good knife for cutting brisket, check out our guide to the best brisket slicing knives.

Turn and Turn About

You will turn the brisket slightly a few times to cut it properly. At every turn, the goal is to position the meat so that you’re cutting perpendicular to, or 90 degrees to or against the grain.

Positioning the Brisket for Cutting

First, to simplify things, let’s set some directional markers, shall we? As you stand facing forward, that’s north. Behind you is south, east to the right, west to the left.

Lay the flat so it’s in front of the hand you’ll be using to cut the brisket; if you’re left-handed, the flat will be to the west and the point to the east.

Begin cutting from west to east until the fatty divide is reached.

As you proceed, you may find the cuts begin to fan out. This is fine; Aaron says the cuts don’t have to be a perfect 90-degree cut; you won’t be in danger of cutting with the grain.

Getting to the Point

Sometimes it’s more appealing to chop the point end into those juicy, crunchy morsels known as burnt ends. More on those lovelies later; for now, we want to focus on serving up an entire brisket a slice at a time.

Looking down at the point section, the longest part should be running east to west. Now:

Make the cuts in quarter-inch strips for the flat — which is a competition cut — and a slightly thicker three-eighths for the fattier point.

Another way to cut the brisket is to:

So, there you have it. Cutting a brisket perpendicular, at an angle, on the bias — they all mean the same thing: slicing against the grain.

If the grain is running east to west, you’re cutting north to south. According to Aaron, a good brisket slice has a combination of bark, meat, and fat.

The art of holding– keeping the brisket tender when the serving time is hours away — is a story unto itself. But one simple way to help retain the moisture is to keep the slices together instead of artistically arranging them on a board or platter. Resting the slices in a little of the braising liquid also works.

The time and effort invested into preparing and properly cutting a brisket are well worth it. The only thing fast about the whole story is how quickly it will disappear.

Should You Cook Brisket Fat Side Up or Down? We Have the Answer!

7 Best Woods for Smoking Brisket, For the Tastiest, Most Authentic Results