Should You Cook Brisket Fat Side Up or Down? We Have the Answer!

Every recipe advises to leave a fat cap on your brisket, for flavor and to protect the meat from drying out. But they rarely say whether to cook it with fat side up or down. It does make a difference, so read on to find out which way is best. 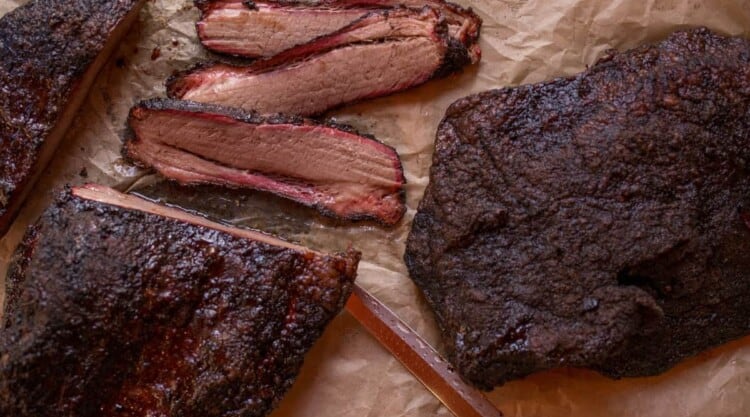 Fat cap up or down when smoking brisket? It’s an interesting question, and one that everyone who has ever smoked beef brisket for the first time asks. Because every story, coin, and beef brisket has two sides. With beef brisket, there’s a fat side and a meat side.

Smoking brisket is an art, and with any art, there are variations in technique. Variations that are chosen through experience of different results, and experimentation in finding what’s best.

In this article, we explore the pros and cons of smoking brisket fat side up or down.

You’ll learn what different pitmasters have to say about how they place their brisket in the smoker and why, and can learn from their vast experience.

So, should you smoke your brisket with the fat side up or fat side down?

Before answering this question, we need to…

Read on to learn more.

“Brisket is one nasty cut of meat. It will fight you ferociously as you try to tame it. Once you do, though, it lays down like a cuddly puppy and rewards you with a big, delicious hug.” — Danny Meyer, restaurateur and Shake Shack Sheik

For some cooks and pitmasters, cooking with the fat side up is the way to go. They say that the melting fat bastes the meat, keeping the meat moist. Others say that the fat will “braise” the meat and work its way through it.

Scientifically speaking, fat can’t penetrate the meat. When it melts and turns into a liquid, it will run off the sides and drip into your pan or smoker taking with it any rub you added earlier. It will protect the meat from drying on the side it’s on, up or down, but not the entire brisket.

One way to prove this hypothesis is to grill a steak to your liking, slap on a slab of butter and see how much gets absorbed. It just melts and runs off the side, right? I rest my case.

Another myth is that the fat also breaks down the meat as it cooks, making it tender and juicy.

The fact is, it’s the collagen that breaks down tenderizing the brisket. Collagen is the connective tissue that holds the muscle fibers together. It takes long slow cooking to break down the collagen.

That’s why pitmasters cook a brisket at a relatively low 225F for many hours, instead of cooking it at higher temperatures in half or less the time. The long, slow cooking gives the collagen enough time to break down and for the brisket to become tender.

Braising is a cooking technique where you first sear the meat then slowly simmer it in a flavored liquid in a covered pot. When smoking, the brisket is usually on a grill grate without a pan, so there is no braising taking place. Plus, you don’t braise with fat, you fry with it. So people saying it ‘braises the meat’ have it totally wrong.

Cooking Fat Side Up — Pros and Cons

If you decide to cook your brisket fat side up, you should know that the fat acts as a heat shield protecting the beef.

If your heat source is mostly from the top, such as with many horizontal offset smokers, fat side up should be the way to go.

The unprotected bottom can dry out, so you do need to check periodically to prevent it from getting too dry. Usually, it will form a nice barbecue bark. However, if it starts to get dry, you can wrap it in paper or foil to finish the cooking time.

One professional pit master, Malcom Reed from HowToBBQRight.com, cooks his briskets fat side up all the way, as seen in this video, except he wraps his briskets in foil about 4 hours into the cook, eliminating the problem of drying.

Cooking Fat Side Down — Pros and Cons

During my research, I found more people prefer to smoke their brisket fat side down, and here’s why.

Probably the biggest reason is to protect the meat from burning when the heat source is below as with UDS, vertical, bullet and Kamado style smokers. These types of smokers are the vast majority of smokers used by competition and home smokers alike.

Another reason to smoke brisket fat side down is that fat doesn’t absorb smoke as well as meat.

Some pitmasters use a spray bottle of water or juice to spritz the meat occasionally. They feel that it helps with moisture, but mostly to let the smoke adhere and create a better bark.

Therefore, the fat cap should be down to allow for easier spritzing of the meat side on top. Others feel that with or without spritzing, they get a better bark formation with the meat side up.

Finally, another reason to cook fat side down is the fat does not stick to the grate as the meat sometimes does. If the meat sticks, it can ruin your presentation.

Here’s a video that explains the benefits of smoking fat side down.

Starting One Way, Then Turning Over — Pros and Cons

The compromise to the up or down argument is to do both.

Some cooks prefer starting with the fat side down for the first half of the cook then flip it for the remainder of the time. They feel it creates a uniform bark and allows for the spices to get into the meat.

Flipping and rotating your brisket is sometimes a good idea if you know that your smoker has hotspots, or an uneven temperature gradient either from top to bottom, or side to side.

If one part of your smoker is hotter than another, the meat there will cook quicker, dry out faster, and be overcooked before the meat in the cooler portion is done.

This is quite common in some offset smokers where the side facing the firebox is often hotter.

Flipping and rotating during a long cook is an excellent way to even out the exposure to the higher heat and promote a more even cook.

Also, it allows one end of the meat to rest and reabsorb the moisture while it’s away from the heat, especially in a horizontal smoker.

Using a different take on the flip idea, one enterprising cook using a vertical smoker puts his brisket fat side down on the lower rack above the water pan. Then he places the trimmings on the rack above it to let the fat melt and drip over it as it cooks. This way, he has fat on both sides retaining more moisture.

Does Your Type of Smoker Matter? In our Opinion, Yes!

In our opinion, the answer to the fat side up or down question lies with your cooker. Understanding how the heat transfers to your brisket will be the key to how you’ll place your brisket in the smoker.

There are two kinds of heat that your smoker produces, radiant and convection. Think about standing on a desert highway in the middle of the summer. As you look down the road, the image shimmers and moves like a reflection on a pond. That is convection heat from the road surface heating the air. In your smoker, it is convection heat that carries the smoke gently around the brisket.

Many pitmasters place their briskets so that the fat and the point get set toward the heat source. This is precisely what we at FoodFireFriends do, and is what we recommend.

For any vertical smoker where the heat comes from the bottom such a Kamado, Weber Smokey Mountain, ProQ or UDS, you’ll put the brisket fat side down.

For offset smokers, the heat and smoke get directed under the meat with a baffle before allowing to rise and circulate on top of the meat. Most of the heat will radiate from one side and downward from above.

So in the case of horizontal smokers such as offset wood burners, pellet smokers and so on, the fat side up might be the best approach.

And, I say “might” because with smoking, nothing is written in stone. Everyone has their way of cooking from experience. I’ve tried to find out how various pitmasters cook their briskets.

Suggestion: If you are using a wood fired or pellet smoker, check out our guide to the 7 best woods for smoking brisket.

Professional Pitmasters Stance on the Fat Up or Down Discussion

Based on comments in videos and websites, here are what famous Pitmasters have to say when it comes to smoking brisket fat side up or down.

Aaron Franklin — Fat side up, “the point towards the fire box in an offset smoker.” You can click here to see the Franklin BBQ brisket recipe.

Myron Mixon — Fat side down. — Water smoker — “Protects that flat because the heat’s coming from the bottom. You cook briskets with fat-cap up, and you think that two inches of damn fat is going to run down through the middle of the meat and come back up the other side? Not unless it’s a magic brisket.”

Troy ‘T-Roy Cooks” Smith — Fat cap down “… If the heat is coming from the bottom such as a pellet grill.”

Chris Lilly — Fat side up

These pitmasters mostly back up the argument that the direction of the heat has the most to do whether you cook fat up or fat down.

After researching this topic on forums and posts spanning over 15 years, I’ve come up with two conclusions about smoking beef brisket.

Takeaway #1 — Cook with fat cap toward the heat source. If you have a small smoker or the temperature is inconsistent, turn the brisket every couple of hours to avoid hot spots drying the brisket.

Takeaway #2 — You should experiment with both techniques, preferably at the same time. The right answer to smoking brisket fat side up or down is whatever works best for you, the people you’re cooking for, and your smoker.

Smoking brisket is something you’ll get better over time.

What are Your Thoughts?

I hope you found this article helpful.

Please, let us know which side of the coin — or brisket fat cap — you fall on in the comments below. Or if you have any thoughts or reasoning not covered above as to why you should smoke a brisket fat cap up or down, please do share it with us!