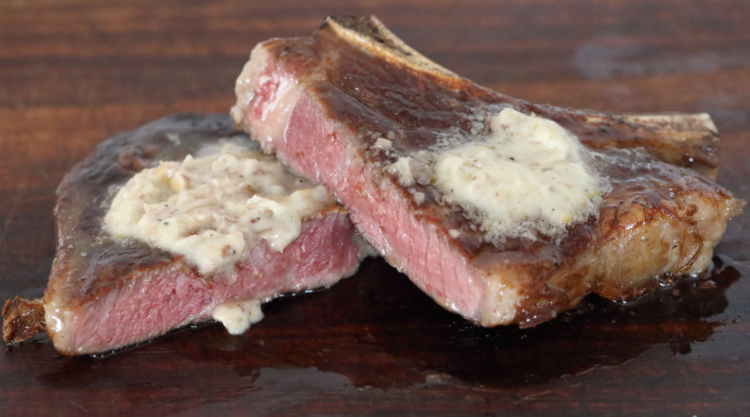 So, we’re back for another dose of food heaven with today’s recipe of Smoked Bone Marrow Butter, and it is one of those things that’s so good, you’ll wonder why you’ve not done it before.

Trust me, after trying this recipe, you’ll be hooked.

Bone marrow is an amazing treat with a rich, velvety texture and complex flavor that is best served with grilled meats, which is handy because that’s what a lot of this site is about. But you can also use it to spread on a breakfast crostini, stuff burgers, or stir into sauces. It’s also perfect for spreading on toast.

Bone marrow is traditionally roasted, but in this recipe, we’re going to smoke it before making it into a compound butter because after trying it, I’m not sure if I’ve ever tasted a better compound butter to melt over resting steaks than this one.

What is Bone Marrow

Bone marrow is the soft, jelly-like substance found in the hollow cavities of some bones. It is composed mainly of fat and hematopoietic (blood-forming) cells.

Bone marrow has many functions, including acting as a storehouse for minerals such as iron, calcium, and phosphate, and serves as an energy source for red blood cells in the body.

It’s for these highly nutritious reasons that bone marrow is traditionally consumed as a food, as well as its rich protein and fat content.

Bone marrow tastes like the ‘essence’ of beef, like a condensed down substance removed from beef that is responsible for beef’s flavor.

It is rich and fatty, dark in color, a little hit of sweetness from the fat, with hints of earthy flavor, but oh so very meaty and buttery.

How to Use Smoked Bone Marrow Butter

Bone marrow butter is traditionally paired with hot toast, spread liberally, and topped off with a few sea salt flakes.

But It’s also a great alternative to butter on vegetables such as asparagus, sweetcorn, or steamed broccoli as it has that rich unctuousness of fat. You’ll find it especially tasty atop roasted cauliflower or mixed as an addition to mashed potatoes.

It can also be used in sauces and sautés or whisked into gravy to add depth and shine.

But easily, my favorite way to use it is melted over grilled or smoked beef dishes while resting. Perfect for spreading across a thick, medium-rare resting steak to add an extra kick of flavor.

How to Make Bone Marrow Butter

Soak your marrow bones in salted water for between 12 and 24 hours to remove any blood, which will discolor the end product and make it look less appetizing. This isn’t a necessary step, but I recommend it for appearance’s sake.

Remove the butter from the fridge one hour before you wish to make the bone marrow butter to allow it to come up to room temperature and soften, making it easier to work with.

Set up your grill for indirect heat smoke roasting at approximately 300 F.

Because we’ll only be smoking for a short time, use a stronger tasting wood such as oak or hickory.

Also, because some fat will render out of the marrow bones, use a pan or a tray to catch these drippings for putting back into the mix at the end. We do not want to waste this flavorful liquid!

When the grill is up to temp, place your marrow bone canoes onto the grates over the drip pan, and also roast the garlic cloves and the shallots alongside, after mixing a knob of butter into the shallots to help them cook and take on more smoke flavor also.

Remove the shallots when cooked through and translucent, and remove the bone marrow when it’s cooked and soft throughout, approximately 45 minutes at 300 F.

Now scrape out all the bone marrow canoes into a bowl and allow it to cool for a good 20 minutes, so it doesn’t melt the butter on contact. At the same time, purée the roasted garlic.

Next, add all the ingredients to a mixing bowl, bone marrow, butter, garlic, shallots, lemon zest, salt and pepper, and the drippings collected from the roasted marrow bones.

Mix well using either a fork or, as I prefer to a wire balloon whisk. I’ve used both methods and get the best results when using a whisk, but it’s up to you, and either will work.

Now place into the fridge for a good 15 minutes or more to firm up slightly, to make instant use or rolling into logs for later use easier.

It’s now ready, and you can either use it right away or form it into logs for refrigeration or freezing for later use.

Forming Logs for Later Use

To form the bone marrow butter into logs, roll out a 30 cm piece of cling film. Then spoon the butter mix onto the cling film, a few centimeters from the front edge.

Take the front edge of the cling film and wrap it tightly up over the butter mix.

Tie a knot in each end, making sure to squeeze out any air as you go before cutting off any excess.

You can now store the log(s) for up to a week in the fridge, or freeze it for up to 6 months.

A bone marrow butter made from smoked beef marrow, smoked shallots and garlic, with lemon zest, salt and pepper.

Forming Logs for Later Use

Add some chili flakes for a quick kick of heat, or add herbs of your liking such as rosemary, thyme or parsley, whichever mix takes your fancy, with a teaspoon of each being about right.