Flare-ups are not only scary, but they can also be damn well dangerous too! In this guide we cover tips for preventing flare-ups, as well as what to do in case you’re faced with one, for both charcoal and gas grills. 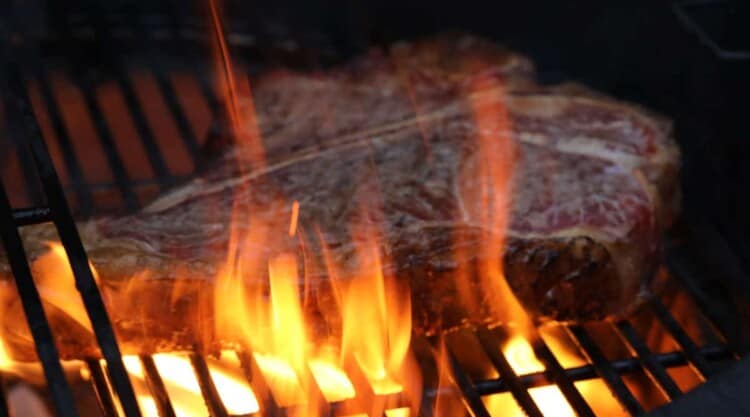 If you’re a frequent griller then it’s likely you’re familiar with flare-ups.

The flames can creep up on you like a forest fire by starting small and growing quickly. And, if the grill has too much grease and carbon built up, now you have a serious grease fire, and it can be catastrophic.

However, flare-ups are preventable so don’t let them deter you from enjoying fabulous steaks and burgers.

Understanding its characteristics, what’s causing it and how to handle it will prevent disaster and keep you safe. And this is what we cover in this article.

Can you avoid all flare-ups during grilling? No, unless you’re cooking fat-free foods. But, what good is barbecuing meat without a little fat with your chicken, pork, steak, and hamburgers, right?

What is A Flare-Up?

It is a burst of high, intense flames in your grill. It usually starts with fat dripping from the meat onto the coals or gas burner, collecting and then igniting, causing a large burst of fire.

Occasional drips are generally not a problem. However, if the flames from dripping fat ignite the old built up grease and carbon in all other areas inside the grill, that’s when you can have a big grease fire.

Some Characteristics of Flare-Ups

Although a flare up could happen from lack of maintenance, usually it starts when placing meat on the grill or flipping it. Typically, it dies down quickly. If it doesn’t, you need to move the meat away from the flames until it goes out.

Let’s look at ways to prevent a flare up before it can get out of hand.

Dos and Don’ts To Avoid Flare Ups While Grilling

Things You Should Never Do to Tackle the Flames

In the event there’s a flare up, here is the list of things not to do:

We all know that you can’t trim fat from hamburger, but you can trim your steaks or pork chops to a quarter inch of fat on the outside to reduce the amount of melted fat dripping into your grill.

You can also buy or make a leaner mixture of hamburger. The leanest hamburger meat is 90/10 or 95/5. The larger number is the percent of lean meat and the smaller number the percentage of fat.

Of course, if you want a juicier burger you will want more fat, typically 80/20 is the sweet spot, though some like to go 70/30. However, with more fat, there is a greater chance of flare-ups.

Preventing Flare-Ups on A Gas Grill

Unlike charcoal, on the best gas grills you can very quickly turn off the gas and let the flare up burn itself out. But, the convenience of gas can also contribute to the lack of maintenance. It’s easy to turn off the gas, close the grill and forget about the grease build up.

Most gas grills have a “V” shaped metal diffuser that fits over the burners to prevent the dripping fat from plugging the burner holes. Some grills use lava rock for this purpose. The diffusers or lava rock and the walls need to be cleaned and degreased regularly to prevent grease and carbon build up.

Use the same “Safe-Zone” Method as a charcoal grill of moving your food to a safe zone should the flames get too high.

And, if you haven’t used or cleaned your grill in a while, here is a quality video on how to thoroughly clean your gas grill.

How to Control Flare-Ups On a Gas Grill

Gas grills are easier to control than charcoal. Here are three steps to putting out a flare-up:

Here is an excellent professional video by Char-Broil on preventing and stopping grease fires in your gas grill.

If it’s still burning after 30 seconds and popping out of the vents, then use a fire extinguisher.

If you don’t have an extinguisher and the fire is so large or your gas tank is burning, GET OUT OF THE AREA IMMEDIATELY AND CALL 911!

NEVER THROW WATER ON A GREASE FIRE! The burning fat floats and will quickly spread everywhere. This is what happens when you throw water on burning grease in those govt safety videos we’ve all seen at some point in life.

Preventing A Flare Up on A Charcoal Grill

As I mentioned, most flare-ups occur on charcoal grills as soon as you place your food on the grate or flip them. Whether it is short-lived, or it creates an inferno depends on the cleanliness of the grill.

The number one reason for the fire getting out of control is a dirty grill. Not just the grill grate, but the entire fire box and walls under the grate.

To prevent the grease from building up, thoroughly scrape out the interior of your grill every time you empty the ashes.

When building your charcoal fire, leave a spot without charcoal as a safety zone to place the meat temporarily in case the flames get too big. I’ll talk about that in a moment.

Weber has a checklist on how to avoid flare-ups, and we’ve provided the key points here.

The best way to avoid flare-ups on your charcoal grill is never to leave it unattended.

How To Control Flare Ups On A Charcoal Grill

Skin-on chicken and thick burgers have lots of fat that melt onto the coals and cause occasional flare-ups.

To avoid this, all you need to do is move things around and out of the flames. It’s when you leave food in the same place, dripping fat in the same spot, that flames turn into a grill fire and burn your food.

A little flame kissing the meat is a good thing. However, once the flames start to wrap around the meat, it’s time to move it to the safe zone on the grill and let the flames subside.

When cooking smaller amounts of food, setting up for two-zone cooking is the way to go. Not only does it save fuel, but you have a cold side of the grill to park your food in a “safe zone” should you need it.

Having a safe zone for your food is the smart way to grill. Otherwise, you have to grab a platter, take the food off the grill and put it back when the flames die down. That’s not always convenient, and there is a chance that you could drop everything.

Another way to reduce the chance of a flare-up is not to overbuild the fire.

Unless you’re a blacksmith bending horseshoes, you don’t need a fire so hot that it warps the grill grates. Common sense tells you that it doesn’t take a giant bag of briquettes to grill two hamburgers.

Estimate the amount of grill space you’ll need to use and how long you’ll cook on it. If you’re cooking steaks for two, build a fire just a bit larger than the steaks.

If you plan on cooking burgers for a crowd, you’ll want to cover the bottom of the grill but not too deep, or you risk getting too many coals going at once. You can always add more later.

The next method can be a bit controversial.

Simply spray a little water onto the coals that cause the flare-ups. You can see the spray technique in action with this short video.

The good thing about using this method is you don’t have to move the food, and it keeps the fire under control.

If you’re cooking in larger quantities and have a significant grease fire, you aren’t going to use this technique because you’ll make it worse.

Another reason this might not be the best method is that the spray can kick up ash onto your food. Not a condiment high on many eaters wish lists.

If the flames are high and there is no safe zone on the grill, remove the meat to a clean platter immediately. Close the lid and vents to smother the flames. However, once the flames die down, it’s not always safe to open the lid. Carefully look through the vents to see if the flames are out.

If you see lots of white smoke pouring out, that means there is still a significant amount of heat inside. If you open the lid now, you risk creating a flash fire as the oxygen rushes in and reignites the grease and the unburned particles in the smoke. There have been plenty of singed eyebrows with this careless maneuver.

Always open the lid carefully by ‘burping it’. This means only opening a couple of inches at first, standing back and with your face well away from the grill and any smoke. In case there is a ‘flashback’, you will be well out of the way.

If no flashback, open the lid fully and allow the fire to adjust and see if the flare-up has died off before returning your meat to the grill.

If the flames aren’t that serious, you can leave a thick steak on for a couple of minutes with the lid closed to give it a nice sear. Just don’t let it go too long.

For gas grills, the prevention methods are the same as charcoal grills with a couple of exceptions.

Always Be Prepared In Case It Happens to You

You should always have an extinguisher, and a good set of gloves handy every time you grill. The day will come when you forget to empty the grease tray, and flaming oil starts dripping onto your wood deck.

Be sure your grill is set up on a solid surface at least 3 feet away from anything combustible and any overhangs.

If you think grill fires are something that won’t happen to you, the NFPA (National Fire Protection Association) has some terrible statistics in their free booklet; Home Fires Involving Grills Fact Sheet. Here are three facts to keep in mind before the next time you start grilling.

You won’t be a statistic if you keep the grill cleaned and in good working condition. Always be prepared and have the proper safety equipment nearby.

Be safe, have fun and pass this article along to someone who can use it.

And remember, if you don’t keep your grill clean and put on a big piece of fatty meat, there’s a very real chance you could end up like this guy.

How to Control Temperature on a Charcoal Grill or Smoker

How Long to Grill Steak, Rare to Well Done, Times and Temperatures