Propane Vs Natural Gas Grills — Why Choose One Over the Other?

What are the differences between propane and natural gas grills? Besides the fuel supply, of course, there are some meaningful distinctions, and pros and cons of each. We look at those here to help you decide which you should buy and why because the answer isn’t the same for everyone. 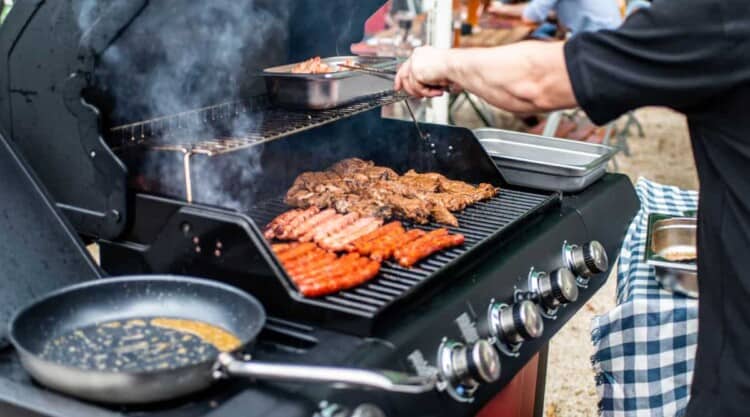 Note: If you click a link on this page, then go on to make a purchase, we may receive a commission but at no extra cost to you. Learn more

Wondering whether to use propane or natural gas?

There’s a big debate in the BBQ world surrounding propane versus natural gas grills, and it isn’t going away anytime soon.

It has rumbled on for many years with propane grills being the clear winner for some time, confirmed by the sale of propane grills historically being almost three to one.

Of late, though, the natural gas grill has risen in popularity, and more recently the numbers are closer to a sixty/forty split in favor of propane gas.

This rise in popularity has many asking, are natural gas connected grills the way forward for the grilling aficionado, and whether they give a different taste.

In this article, we will be exploring the difference between natural gas and propane gas grills.

We’ll be looking at what the benefits of each type are, along with the drawbacks, and once armed with this information, you will be able to make a firm decision as to what suits you and your BBQ style.

So, let’s jump straight into the debate …

Natural Gas Vs Propane — Which Should You Choose?

This is a tough one! With so many benefits to both, it’s hard to decide which is better overall. So, it comes down to personal preference for what suits your style of grilling.

If you like convenience and to spark and char with the least fuss, then a natural gas grill will suit you. With no tanks to worry about purchasing, running out or returning, you just light her up and cook ’til your heart’s content.

However, if you like to move around the garden and chase the sunshine, and love a ridiculously hot grill that will cook and sear a great steak, as well as cook everything else you chuck at it, then an anchor free propane gas grill will allow you to do all this and more.

For cost, natural gas is cheaper, especially if you are already mains supplied.

But on the other hand, propane gas grills are still generally cheaper than the natural gas ones. So, this depends on your circumstances.

Let’s dig a little deeper and justify my comments above…

What is a Natural Gas Grill?

Quite simply, it is a gas-powered grill burner that runs off a mains gas supply, similar to the setup of an oven and hob within the home.

Gas is a naturally occurring hydrocarbon mostly made up of methane with other gases such as carbon dioxide, hydrogen, and some helium.

It is found deep underground similar to oil and is produced when plants and animals die, leaving their bio-matter to decompose.

Exposed to high pressure from the pressure of rock layers and intense heat from the Earth’s core, this matter effectively releases the energy that these organisms gained from the sun in a gaseous state. This is trapped underground until released.

Often found with or near oil, the gas can be channeled and captured, then delivered via gas pipes to a processing plant where it’s stabilized and purified, before being piped directly to your home.

You can check out our buying guide for a look at some of the best natural gas grills on the market.

What is a Propane Gas Grill?

A propane grill differs slightly to a natural gas grill in that it uses liquefied gas stored in portable canisters or cylinders to fuel itself, rather than being connected to a gas line.

Propane gas is a refined and processed by-product of natural gas and petroleum refining.

Initially refined in gas form, it is then compressed into a transportable liquid and commonly used as a fuel for many things.

Most of our avid readers will recognize it as the liquid-gas of choice for most grill masters and their chosen gas grill. The reason being it has a very low boiling point, which means it vaporizes as soon as it is released from the gas bottle container.

Propane burns cleaner than coal or gasoline and has a low carbon emission rate similar to natural gas, so is often chosen over traditional fuels such as coal or diesel fuel.

For a look at some top models available, please check out our guide to the best propane gas grills.

Advantages of Grilling with Natural Gas over Propane Gas

Natural gas is touted as the stepping stone for large economies, like America, to use while they reduce their reliance on oil and coal to find suitable renewable energy sources.

The reason for this is that natural gas burns cleaner and produces less than half of the carbon emissions that coal does per unit of energy used.

Many a grill fan have chosen to switch to a natural gas grill for this reason alone. That way, they can enjoy twice as many barbecues without worrying about an increased carbon footprint. It also has a marginally lower carbon output than propane.

Easy on Your Pocket

Natural gas is also cheaper than other fuels.

Compared to bottled propane specifically, it costs roughly a third per unit. This means if your property is already supplied with mains gas, it could be much cheaper to run your grill with natural gas and not propane.

Just bear in mind that if you aren’t connected, and the nearest main is some distance away, it could run to thousands for a connection to be installed.

Natural gas delivered via mains supply is much more convenient than bottled propane for several reasons.

Mains gas is an endless supply that is very unlikely ever to cut out or run out in the middle of a barbecue like bottled gas can.

And if this has happened to you before, you’ll know if you haven’t a spare to hand, it means heading out for another, or scrapping the barbecue completely, which is very inconvenient.

It’s been said by natural gas converts that propane, being a gas derived from liquid form, has a ‘wet heat’ element to it that can change the texture and consistency of food. And not for the better.

With this in mind, they believe that natural gas is preferable for flame grilling, giving a better char and smoky flavor compared to propane gas grills.

Advantages of Grilling with Propane Over Natural Gas

But hang on, I hear you say, you just said natural gas was greener, and yes I did, but …

A natural gas grill will have wider ports allowing the flow of gas to be faster as more needs to be burned per minute to create the same heat as propane.

Let’s face it, we all love to barbecue because it connects us to the outside world and gives us that feeling of cooking wild. This means that we are often found barbecuing in the garden, at the park or on the beach.

While charcoal is the usual go-to for portables, propane gas is increasingly popular for its ease of use and quick-fire cooking. Natural gas just doesn’t give you the portability of a propane tank.

A mains supply can’t be taken with you to the lodge or lake, meaning the lovely grill that cost you a lot is chained to your house, and you’ll see nothing of the big wide world. Propane gas gives you options for the setting in which you want to enjoy it.

No Upfront Costs to Install

Unlike natural gas, propane gas can be installed anywhere as it comes in bottles. This means that you do not need to pay for a connection to be installed or procured if you live too far from the mains supply.

So using propane gas might just save you thousands of dollars, and that’s plenty of meat and beers to be had!

My final advice on choosing to use propane or natural gas, is a not very helpful: ‘It depends.’ I’m sorry, but there is no one answer for all people.

The above discussion should have helped you decide which is the right fuel type for you and your particular needs. And if it has, then my work done 🙂

Let us know what type of gas grill you prefer in the comments below, and why!

Pellet Grill Vs Gas Grill — Which is Better? We Would Choose…

Weber Genesis II E-310 Review — is This the Gas Grill for You?