Wild garlic butter is easy to make, with ramsons free and easy to pick from most ancient woodlands. Make this compound butter in bulk, then freeze to use year-round, with meat, fish, vegetables, or any place where you’d use regular butter but would enjoy an extra kick! 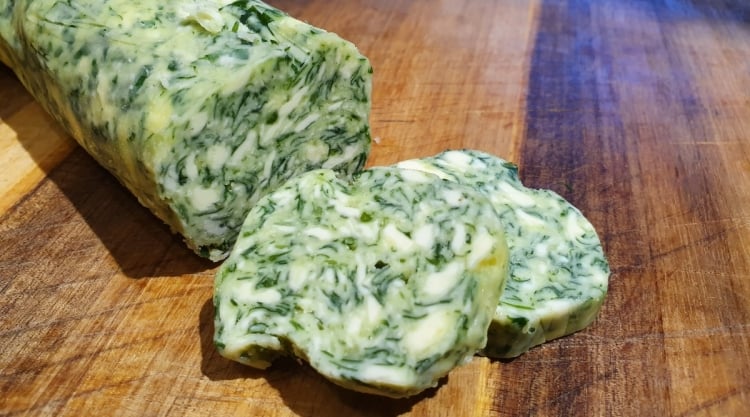 Wild garlic butter! Yum. This is a simple yet delicious way to enjoy the delicate flavor of wild garlic and is a recipe that has become one of my favorites.

The cool thing about it is it’s quick and easy to make, and you can make the butter ahead of time, store it in the fridge or freezer, then cut off just what you need to use at the time.

It can be used in many dishes, from breakfast eggs to my favorite which is melting over resting grilled meats — No surprise there, eh?.

For those of you who love garlic, this recipe is for you. It is a simple way to add depth and flavor to so many dishes and an easy and delicious way to take a dish from ordinary to extraordinary.

Plus, finding and picking your own food is exciting and fulfilling, which leads to satisfaction when eating that is hard to rival!

What is Wild Garlic?

Also known as ramsons, hedging garlic, or wild leeks, it is a member of the onion family. It has broad leaves and white flowers that grow in clusters from its stalk.

The smell and flavor, as you might guess from the name, is that of garlic. But although the smell can be powerful, the taste is sweeter and less intense than regular garlic.

The flavor varies depending on when it was picked because some varieties become hard and woody later in the season after prolonged exposure to sunlight. The flavor also strengthens and intensifies, so you want to pick it young and early in the season.

It has long been used to flavor dishes such as soups and sauces, and as an ingredient in salads, omelets, sauces (such as béarnaise), and stews. You can also chop the leaves finely to use as a garnish on vegetable dishes or pasta.

You can find it growing wild from Japan to Northern Europe — though it doesn’t grow everywhere.

Wild garlic has broad leaves and white flowers that grow in clusters from its stalk, with roots growing from a small onion-like bulb at the bottom of the stem.

The plants typically grow in clusters, and the white flowers grow on spikes directly out of its middle, though not all varieties will produce this type of flower head.

Wild garlic has a similar flavor but is milder than the standard bulb variety we buy in stores.

The taste varies depending on the time of year it was picked because some varieties will become hard and woody later in the season, particularly after prolonged exposure to sunlight and the plant flowering.

When harvested early in the season before flowering starts, it has a milder, earthy yet sweet flavor than if picked after flowering occurs when it becomes stronger and more intense.

Where to Find Wild Garlic

You can usually find it growing in damp and moist conditions, so it’s a good idea to look around the edges of ponds or rivers.

The plant likes shade but will also grow well in full sun if there is enough moisture nearby.

Common in woodland areas, wild garlic can be found by looking for clusters of their leaves and flowers growing around the base of trees or at forest edges. Though in many ancient woodlands, it can be found carpeting the entire woodland floor over many acres.

Finding some may require you to walk through grassy areas like parks or fields where typically such plants are found growing among other herbs that were introduced by humans and so have less competition than they would naturally.

When is Wild Garlic Season?

It’s at its best in early springtime, which lasts for 6 or 8 weeks. Though you can harvest it throughout spring and early summer.

The season starts around late March and finishes between May to June, depending on the climate of where it is grown.

However, some varieties are available year-round if grown indoors in greenhouses or poly tunnels, so they can continue being cultivated all year with artificial light sources such as lamps and LEDs instead of sunlight like outdoor plants do.

Some suppliers import wild garlic from other countries during off-seasons because there is a growing demand for this ingredient throughout the USA and Europe.

Why Make it Into a Compound Butter?

Although wild garlic is a delicious ingredient on its own, the flavor intensifies when it’s mixed with butter.

This happens because of the high fat content in butter that provides mouthfeel, carries flavor, and helps with flavor release.

Also, the wild garlic season is short-lasting, just 6 to 8 weeks. By making it into a compound butter, you can then freeze it in portions, preserving it for use throughout the year as it’s good for up to 6 months when frozen.

It can be used for stirring into or melting over many different dishes such as pasta sauces, salmon topping, stuffed mushrooms, or my favorite: For melting over resting steaks!

But you can also melt it over boiled or steamed vegetables, smear under the skin of poultry in place of regular butter, on jacket potatoes or crushed into new potatoes, smeared over pork chops, or on sweetcorn.

How to Store Your Homemade Wild Garlic Butter

You can store it in the fridge for up to one week. If it’s stored in the freezer, it will last for up to six months!

The butter works best if it’s warmed a bit and soft before using, particularly for dishes that call for melting the wild garlic butter over them.

Softening can be done by leaving it out at room temperature for a couple of hours or far more quickly by placing it in a bowl of hot water just long enough until it’s softened and then mixed into your dish as desired.

How to Make Wild Garlic Butter

First, remove the butter from the fridge and allow it to come up to room temperature for an hour, so it is softer and easy to work with.

While the butter is coming up to temp, wash and dry your wild garlic leaves, because as you can see in the photo below, they will contain seeds and dirt.

Simply rinse under running water, then spread out to dry naturally.

When FULLY dried, chop the wild garlic finely using a sharp knife. Do not use a food processor or blender, they are too harsh, bruise the leaves, and they then lose color and flavor.

Roll up the leaves and then slice very thinly perpendicular to the roll before then chopping finely.

Next, add all the ingredients to a mixing bowl, the wild garlic, butter and salt.

Mix the butter, wild garlic leaves, salt, and pepper together until mixed well using either a fork, or as I prefer to a wire balloon whisk.

I’ve done my mixing with a fork before, but the reason I use a balloon whisk is that it just seems give a much more evenly distributed mix of the ingredients. So even though it is slightly harder work with the butter getting clogged up inside the whisk at times, it’s worth it.

You will know it’s mixed well enough purely by eye, when it looks creamy and all ingredients are combined evenly as seen in the image below.

You can now use this right away or form it into logs for refrigerating or freezing.

To form the compound butter into logs, first roll out a piece of cling film about 30 cm or so long. Then place the butter mix into the center.

Fold one side of the cling film tightly up and over the butter mix.

Now hold one end of the cling film in each of your hands, and roll it back and forth, twisting the ends until you have created a well-shaped log entirely wrapped in the cling film.

You can now refrigerate for up to one week or freeze for up to 6 months.

A wild garlic compound butter made of wild garlic, butter and salt. Perfect for melting over resting meats, boiled vegetables, or to stir into sauces or soups.

Everyone’s taste is different, so the amount of salt is required is up to you. About a level teaspoon suits most people, but ‘salt free’ is till delicious, and can even be better if adding the butter onto already seasoned foods.