This is my take on the famous South American, zingy, tangy, herby, spicy, garlicky condiment that is, in my opinion, the absolute best accompaniment to many cuts of grilled steak. It’s easy to make, packs a real punch, and will impress anybody you serve it to. 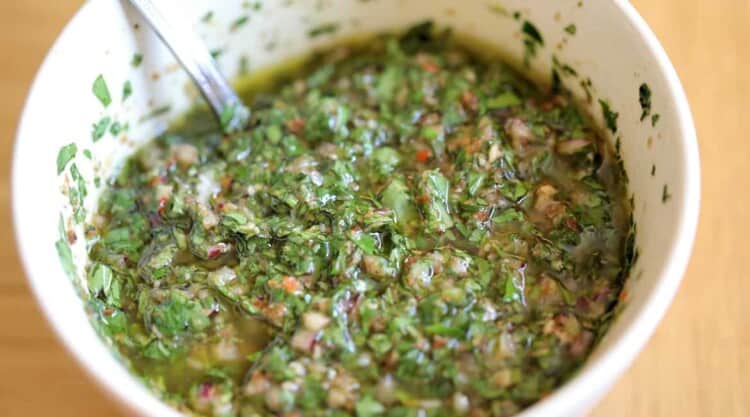 Chimichurri sauce is super tasty, delivers a real punch in the flavor stakes, uses simple, readily available ingredients, and can be made in just a few short minutes.

Traditionally used in Argentinian grilling, Chimichurri is a sauce or marinade with a pleasantly sharp, tangy, herby and earthy flavor, most often paired with grilled steak or beef.

But it’s also used as a condiment – or marinade – for chicken and fish dishes, sometimes basted over grilled vegetables and can even be diluted with extra oil to use as a salad dressing.

Following is my take on Chimichurri sauce, a recipe I’ve landed on through trying and tweaking many variations over the years, and a recipe that friends and family praise and compliment for it’s taste.

An authentic Chimichurri recipe contains only:

However, there are a huge number of variations to be found, with some recipes containing cilantro, lemon juice, and some even adding fresh mint.

Though you might never see these variations at a traditional South American Asado or Churasco, these alternative ingredients can be readily found in recipes I’ve followed over the years from on the web. And many of these I’ve enjoyed!

My Chimichurri recipe somewhat combines the best of many versions I’ve tried, with a couple of optional ingredients I like to add that up the umami hit and really take it to a new level (in my humble opinion.)

As you can see in my ingredients shot above, I like to add cilantro as well as lemon juice. I think it adds a nice freshness to it, that contrasts and balances the earthy oregano and powerful beefiness of a grilled steak.

You might be surprised to see that I also add in some mixed woodland mushrooms and a few anchovy fillets.

These last two ingredients aren’t seen in many other recipes and are entirely optional. I do not add them all the time, but love to do so if serving with beef.

It might seem the mushroom and anchovy’s barely change the taste on first impressions, and you certainly cannot pick out any mushroom or anchovy highlights, but they certainly complement and lift the savory notes and increase the bang factor of any meat it’s served with, especially those cooked to a wonderfully deep Maillard crust.

If you do add mushrooms and anchovies, I recommend:

You want the mushrooms and anchovies to disappear into the sauce completely.

What Texture Should You Aim for?

When it comes to preparing the sauce, the final texture is entirely up to you.

Some people like to chop the ingredients roughly, a bit like a chunky salsa. Others to blend all ingredients into a very smooth paste until it looks like a pesto.

I like to chop the ingredients by hand, leaving quite large pieces, so there’s some texture to the sauce. If I’m short on time, I have been known to ‘pulse’ the ingredients in a food processor until I get the consistency I like, but in my opinion it’s too easy to overdo it so I prefer to chop by hand.

Play Around With the Recipe

I encourage you to play around with the recipe, and believe me, it’s hard to go wrong. I have tried many different peoples recipes over the years, and they’ve pretty much all been shades of great to wonderful. And if you do have a play and not like the result, it’s easy to recover and correct by adding more ingredients as you go along.

As you can see in my image below, this particular batch of Chimichurri I served with a sliced, rotisserie cooked Sirloin steak roast that I cooked on my Weber Kettle grill, and a basic salad (recipe for the sirloin steak to follow soon!)

So without further ado, here is my ingredients and instructions for making perhaps my favorite version of a Chimichurri sauce recipe.