Grilling Vs. BBQ — What’s the Difference? (If There is One?)

There’s BBQ, and there’s grilling. They are both performed outdoors, often on the same equipment, but they are very different things with different goals, despite the terms being used interchangeably. Learn the difference between barbecue and grilling in this quick guide. 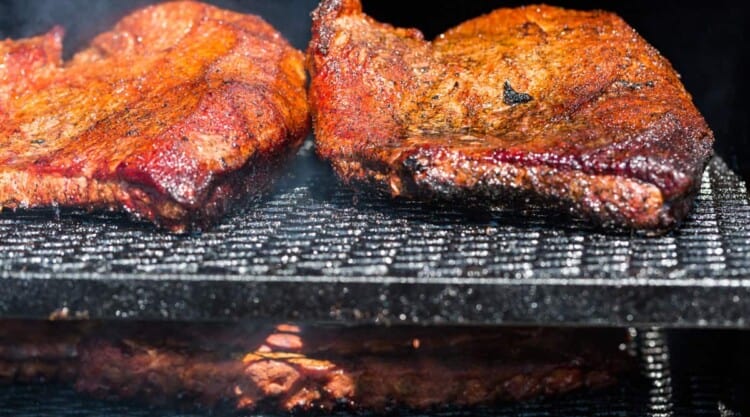 In this brief article on grilling vs BBQ, you’ll learn the difference between grilling and barbecue techniques, plus what cuts of meat should be cooked with each.

Grilling and barbecue can trace their beginnings from the same cooking origin, although today, they’re two very different techniques.

First, let’s jump in our time machine because I’m going to take you back to when the first Spanish explorers discovered grilling techniques and how it evolved into separate cooking styles over time.

We’re going back to where this story begins 491-years ago to travel with Gonzalo Fernandez de Oviedo. He was a Spanish historian and writer, who was discovering the New World. He observed natives roasting meat on woven wooden sticks over coals and described it as something that looked like, “grating or a trivet over a pit.”

He was the first person to write the word “barbacoa” in his history book, De la Historia General y Natural de las Indias. In this book, he was referring to the Indians of Tierra Firme, now Central America. He used term barbacoa to describe the actual grill and not the method of cooking.

The word Barbacoa worked its way around the Caribbean and ended up in English dictionaries as barbecue or barbecue. The Oxford Dictionary lists BBQ as both a noun describing the grill and a verb describing the cooking style.

The history of grilling begins long before barbecue, when man first tamed fire, about 500,000 years ago.

Today, when we think of grilling, we’re talking about the backyard grill, where we make a fire to cook our hot dogs and hamburgers.

This is a recent innovation that began after WWII. As the soldiers returned home and built up the suburbs, picnics and cooking outside took off. From the 50s until now, it seems everyone needs a backyard grill.

Although barbecue and grilling have the same roots, today they are two very different styles. Let’s take a detailed look at the differences between the two.

4 Ways That Barbecue Differs from Grilling

Putting aside potential differences in the equipment used (which is discussed in our smoker vs grill article) What these cooking methods have in common are fire and a grill grate. From there, the styles diverge in four distinct ways:

Every animal has different types of meat requiring different preparation and cooking methods to make them tender and delicious. It is the main reason we have two kinds of cooking styles to handle the various cuts.

Let’s look at each method in turn:

The Characteristics of Barbecue

The Characteristics of Grilling

What is grilling? A more detailed look at this cooking technique.

Use of Marinades and Spices

Almost every chef and pitmaster sprinkle a little salt and pepper on everything they grill or smoke. However, there is a big difference between grilling and BBQ when it comes to using dry spices (rubs) and wet marinades.

You’ll find stronger seasonings, both wet or dry, for barbecue compared to grilling. The long cooking time allows the flavors to work their way into the meat, while the lower temperatures don’t burn, carbonize and turn the surface spices bitter.

Dry rubs on grilled meat tend to burn, so rather than add more flavor, it just tastes bitter and off-putting.

Also, with most grilled meats we want to avoid wet marinades as the moisture prevents browning, especially the grill marks that are a commonly loved sign of a perfectly grilled piece of meat.

Remember, browning isn’t just a sign of having been cooked, due to the Maillard reaction, of proteins and sugars caramelizing, it’s an added layer of flavor. We want this, and wet marinades can prevent it.

Barbecue sauce adds a sweet and spicy flavor to any meat or poultry. Because it usually contains sugar, it will burn above 350 °F (177 °C). You don’t add it until the last hour if you are barbecuing.

Typically, you don’t add barbecue sauce at all when grilling because it will very quickly burn. However, you can add it during the last few minutes of cooking for a nice glaze.

Where is the fire?

The big difference between grilling and barbecue is the location of the fire.

With grilling, your meat sits over the coals for very hot, quick direct cooking.

Barbecuing uses an offset or 2-zone fire for indirect heat, that means the food cooks slowly by convection or indirect heat, like an oven. The food is not directly cooked by being over the heat source.

Both grilling and barbecue typically use charcoal or briquettes as fuel. However, because barbecuing uses indirect heat, many pitmasters use wood for their fires as it adds extra smoke and the flames do not contact the meat like they would in a grill.

Two Styles of Cooking for Two Types of Meat

Hopefully now you can see the difference between BBQ and grilling, and why you need to learn both methods if you want to cook all and any cut of meat.

Large and tough cuts require long slow cooking to break down connective tissues. For example, if you cut a slice of beef brisket and slapped it on the grill like a burger, you would barely be able to chew it.

Barbecue offers the right amount of heat and plenty of time to tenderize any tough, sinewy cuts. You just have to wait a few hours before you can eat it.

On the other hand, grilling ‘gets things done.’

High heat and fast cooking mean you can eat in minutes, not hours. That’s why we love our steaks, burgers, and hot dogs because they cook fast, and can be eaten quickly. You can feed a crowd in a hurry right from the grill.

Each style has its advantages, and now you know the difference.

Griddle Vs Grill — What’s the Difference? How and What to Cook on Each?

What is Prime Rib? Where Does it Come From? How to Buy the Best

Are Electric Smokers Any Good? — Top 7 Reasons to Buy One