Pork belly, stuffed with pork loin, liver, onion, sage, rosemary, thyme, garlic, fennel, lemon zest, and white wine. I adapted this classic Italian dish for rotisserie cooking, and in my opinion smashed it out of the park! I loved this dish, you should try it. 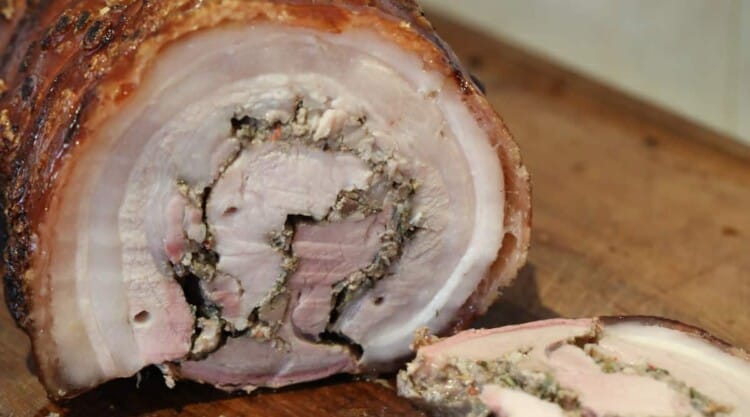 Porchetta is a traditional Italian dish comprising a whole hog deboned and stuffed with liver, herbs, and wild fennel, then spit-roasted for 8 to 10 hours over a wood fire.

Now I’m not sure about you, but I don’t own a rotisserie large enough to hold an entire pig! My trusty Weber rotisserie might be able to hold a small suckling pig, but I doubt even that.

However, you can achieve a close enough approximation using a pork loin rolled in a skin-on pork belly, and indeed this is what’s used in the majority of porchetta recipes you’ll come across, including this one here.

Aside from the cut(s) of pork chosen, the variations in ingredients for the stuffing in porchetta are incredibly varied, from traditional centuries-old recipes to modern exotic affairs with all sorts of herbs, fruits, and more.

Here are the ingredients for my take on porchetta, which sails quite closely to age-old traditional recipes.

First, you want to butterfly the pork loin so that it lays flat.

And quite often, when you buy pork belly, you will have the meat that lays between the rib bones still attached, as seen in the image below.

You will need to trim this away because with it attached, it makes the belly somewhere between incredibly hard and impossible to roll up once you have added the loin to it.

You can easily ask the butcher to trim this meat away for you, and they will happily do so.

But I prefer to do it myself, and for this recipe, you will want this meat to mince and put into the porchetta stuffing later anyhow. So if you do ask the butcher to trim, make sure you still buy it to include in the recipe.

Once you have trimmed the loin and belly, there’s a final step of laying the loin out on top of the belly and trimming some meat from the left and right sides so that the loin is smaller than the belly.

This makes it easier to roll and ensures that when you do roll it, the ends will meet up, and you’ll have a more perfect looking roll.

The first step in making your porchetta stuffing is to mince the off cuts from the loin and belly you have prepared.

Next, strip the leaves from the stems of the rosemary and thyme.

Then finely chop, but keep separate:

The reason we keep them separate is they will be added to the pan to cook through at different times.

At this time, take your bread, remove the crusts and soak it in warm water in a bowl, ready for use later.

Next, toast the fennel seeds in a hot, dry pan for 30 to 45 seconds until they just start to release their aroma. Be careful not to burn them!

Next, dice your chili and then add the toasted fennel seeds, a tsp of salt and the chopped chili to a pestle and mortar before grinding into a paste.

Next, in this order:

Once cooled, take your bread and squeeze out as much water as possible, then add to the stuffing mix.

You can finely chop the bread now so that you can combine it with the stuffing mix by stirring, but I just get my hands in there and combine it that way.

Before working the bread into the stuffing mix, add a good 50ml of the wine to begin and then start to combine things.

If the mix feels too dry, add more wine. You want it to feel nice and wet, but not sloppy or runny. I find I need somewhere between 70 and 90 ml. Never less than 50 ml, but never quite the full 100 ml.

And that’s the stuffing done!

First, lay the belly skin side down.

Next, grate the zest of two lemons over each of the loin and belly, then sprinkle on a tsp of salt and the black pepper, and then massage into the meat.

Now you can spread the stuffing mixture over both the loin and the belly.

I find since the loin becomes the center of the whole porchetta that it’s easier to roll if you put a slightly thinner layer on the loin and a little extra on the belly.

Now, place the loin on top of the belly, with both of them having the stuffing side up, and roll them up as seen below.

This is not easy! But persevere, get it as close to a good and tight as you can, and all will come together and look better after you tie it.

For the final stage of assembling the porchetta, tie string at regular intervals along the length, and pull it quite tight.

As you work along the length tying it, try to make sure the ends of the roll meet, and that everything looks quite neat and tidy as you go.

When finished, rub salt all over the skin, place it in a roasting tin and leave it in the fridge overnight, uncovered, to dry out the skin which helps promote an excellent crispy skin after cooking.

Remove the porchetta from the fridge, insert your rotisserie forks nice and tight, and then rub the porchetta all over with the remaining 2 tbsp of olive oil.

This goes against all the advice of getting good crackling, I know! BUT here’s the thing: The traditional Italian porchetta has crisp skin, not crackling.

Crackling is the very bubbly, thick, aerated skin many of us want on our roast pork. But porchetta does not have that. It should have a somewhat flat-looking, but still very crisp skin.

If you do want proper bubbly looking crackling, then do not rub with the olive oil.

At this point, you want to start checking the internal temperature of the meat to see if it’s cooked.

Using an instant-read thermometer, check the temperature of the meat at the thickest part. When it reaches 145 F / 63 C, then it’s cooked. This could take anywhere from 3 to 4.5 hours total cooking time and will depend on ambient air temperature, wind, the thickness of the meat, and so it’s impossible to predict accurately.

When the target temperature is reached, remove it from the rotisserie and leave it to rest for a good 45 minutes.

Simply slice the porchetta into your chosen thickness.

Then serve with whatever sides of your choosing.

I served mine with roasted potatoes, some boiled cabbage, gravy, and some apple sauce. BUT, I forgot to take a decent picture of the full plate. Amateur!

Prep the pork loin and belly

I’ve received comments in the past that the skin should be more ‘crackling’ like. Traditionally though, in Italy, the skin on porchetta would be crisp but not crackled. If you do want that bubbled, crackled like skin, then do not rub the porchetta in olive oil before cooking, and score the skin all over in rings around the porchetta. The extra dryness and ability for fat to render out will then cause the skin to bubble up and crackle throughout the cook.

The safe internal temperature of whole cuts of pork was lowered by the USDA from 160 F to 145 F back in about 2011. For ground pork mince, it remains at 160f. But because we cooked the pork mince before using it in the stuffing, we are safe to cook to 145f only, and this lower temp results in meat that is more tender and moist. But by all means, take it higher if you so wish! The whole thing will still be moist and delicious at 160 F, just not as good in my opinion.

I like to add a couple of chunks of applewood to the charcoal a few minutes before first putting the porchetta on. It adds a deeper smoky flavor and brings the whole cook a touch closer to the age-old tradition of cooking porchetta over a wood fire.