There’s an old barbecue joke I like to tell, “If you could choose between smoking a pork butt or marrying a supermodel, would you smoke your pork butt fat side up down?”

While that may be funny, some people are mighty opinionated when it comes to cooking pork butt fat side up or down. Some people swear one is superior to the other. 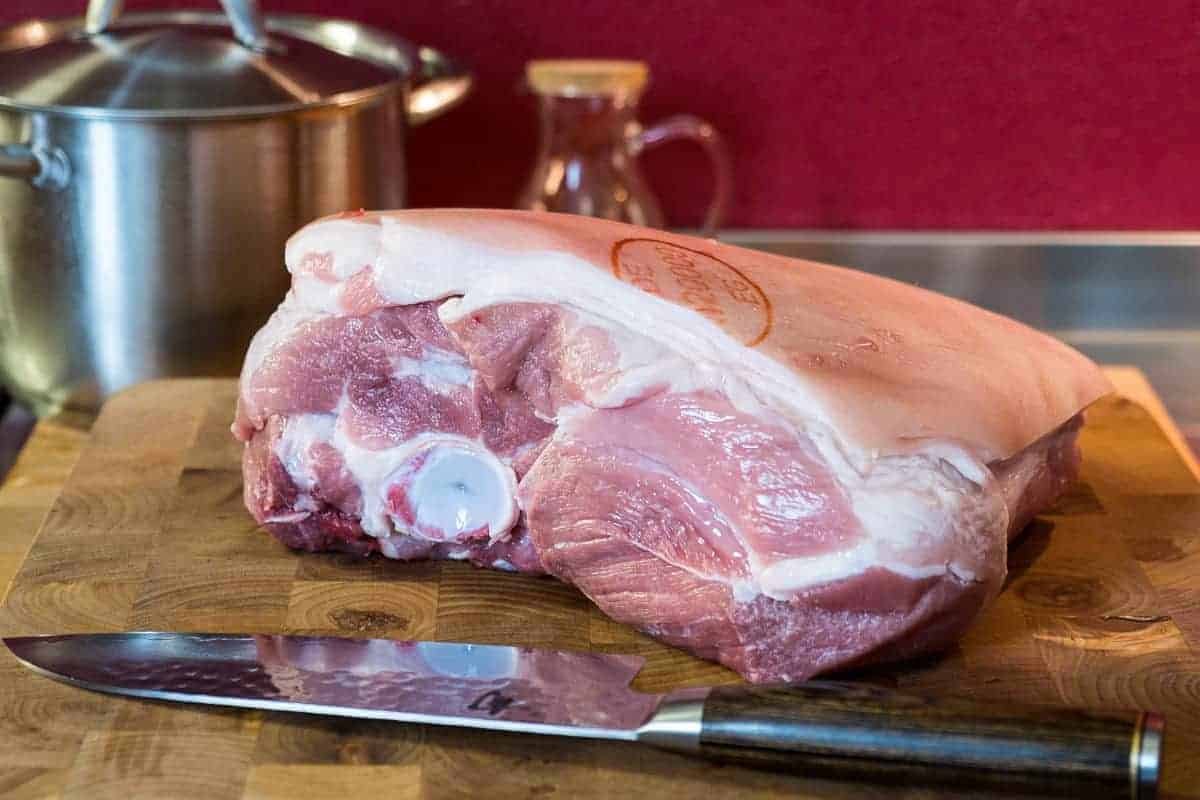 Meanwhile, many of us wonder; is there really a benefit of doing it one way over the other?

That’s what we’re going to discuss in this article.

What is a Fat Cap?

On many large cuts of meat like pork shoulder, there is a fat cap, a layer of hard white fat that sits on top of the meat.

This fat can sometimes be as much as an inch in thickness and will have to be mostly removed before cooking. If the butcher hasn’t removed it, most home cooks will trim it down themselves prior to cooking.

You do not need to remove all of the fat, and you should be careful not to trim too much, so you do not remove any of the meat below.

Cooking a Pork Butt Fat Side up

Some people will only cook their pork shoulder with the fat cap facing up. The main reason for doing so is they swear it allows the fat to baste the meat as it renders away.

Among other reasons, he simply explains that meat is mostly water, and fat is mostly oil. Water and oil do not mix. The fat will remain on top of the meat, possibly render away and melt off of it basting the meat, but it will not penetrate deep into the meat as it cooks.

While it may not do much, a melting fat cap will somewhat baste the meat on the surface of the pork shoulder as it renders away.

An obvious flaw in this method of smoking a pork butt is with the fat cap melting and running down over the meat, it can potentially wash away and remove some of the rub that you put on the exterior of the pork shoulder.

Cooking Pork Butt Fat Side Down

Just like how some people swear cooking fat cap up is the only way to do it, there are others who swear that cooking fat side down is far superior.

Fat burns, and depending on the configuration of your smoker placing the fat cap on the bottom will run the risk of exposing it to direct heat and can cause flare-ups.

This could also result in a charred and crispy pork shoulder, and not in a pleasant way.

A less common way to cook a pork shoulder, or any other large hunk of meat, is to flip the meat as it cooks periodically. This way it spends time with the fat cap both facing up, and down.

You are getting the best of both worlds. The fat cap can take turns between rendering down, basting the meat, and acting as a barrier to keep the precious meat from drying out.

Every time you flip your pork butt over, you are going to lose some of that rendered down fat that has been basting the meat.

Also, by continually opening and closing your smoker, heat is going to escape and will need to recover once you close the lid, ultimately adding to the overall cook time.

Should your smoker determine if you cook your pork shoulder fat cap up down? Yes, according to Joe Haynes, Certified BBQ Judge, and blogger at Obsessive Competitive Barbecue.

Joe explains that every smoker is a little different and that the heat source will come from different areas depending on how your smoker is designed.

Our Advice on Pork Butt fat Side up or Down? – Face it Toward the Heat

Further to Joe’s recommendation above, we believe the best way to cook a pork butt, or any other meat with a fat cap, is to cook it with the fat cap facing toward the heat source.

The key in most smokers – since they all have certain hot spots and temperature gradients – is to then not leave your pork shoulder in the one position for the whole cook but to instead spin it around on the grill grate so that all sides of the pork shoulder can evenly cook, render away, and receive smoke from the fire.

We do mean to spin, to rotate, not to flip it over. The fat cap should stay the same way, either top or bottom for the whole cook, and which will depend on where your heat source is.

For any vertical smoker such as a kamado, Weber Smokey Mountain water smoker, or an ‘Ugly Drum Smoker,’ this means fat side down.

For offset smokers or pellet smokers, most of the heat comes from one side, flows through the unit and then down from above, so we recommend fat cap up.

Ultimately, we strongly recommend that most people experiment to see what works best for you with the tools you have available. And hey, once you’ve smoked your pork butt, don’t forget to check out our guide on how to pull pork properly 😉

What do you think of our take on cooking a pork butt fat side up or down? What do you do when you cook a pork shoulder and why? Do you think we’ve missed any obvious points?

Please leave us a comment down below letting us know what you do and why, so we can all learn from each other!

And if you liked this article, we’d really appreciate you sharing it with any of your grilling friends.

Pin it for Later 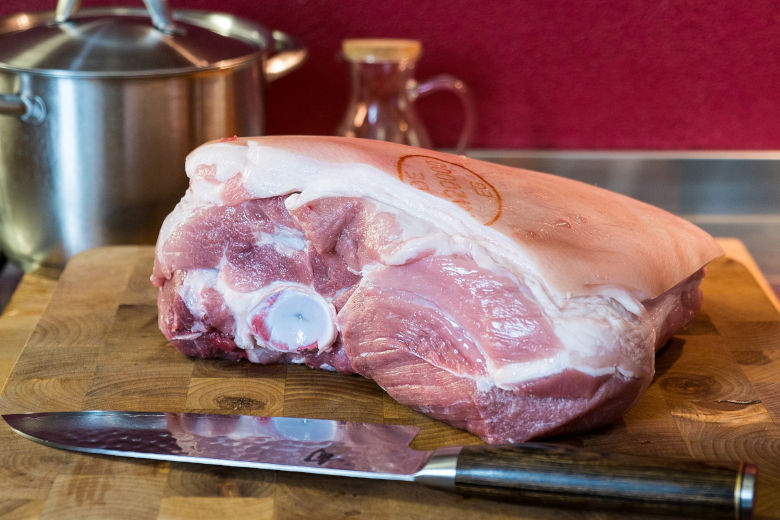 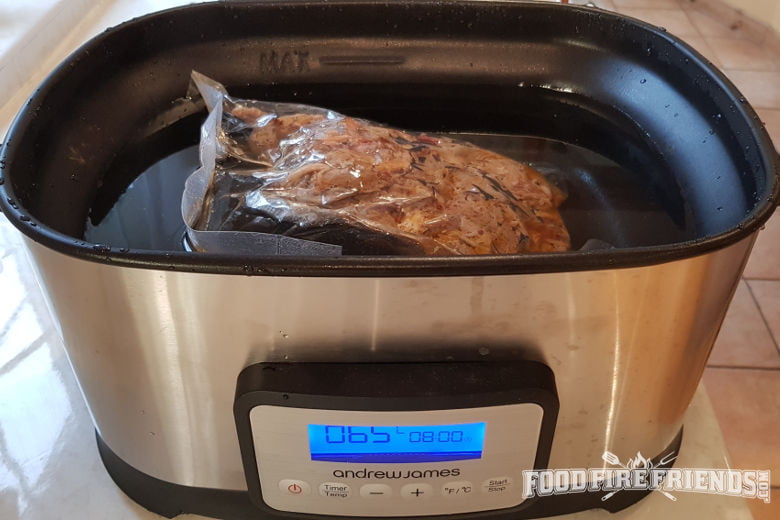 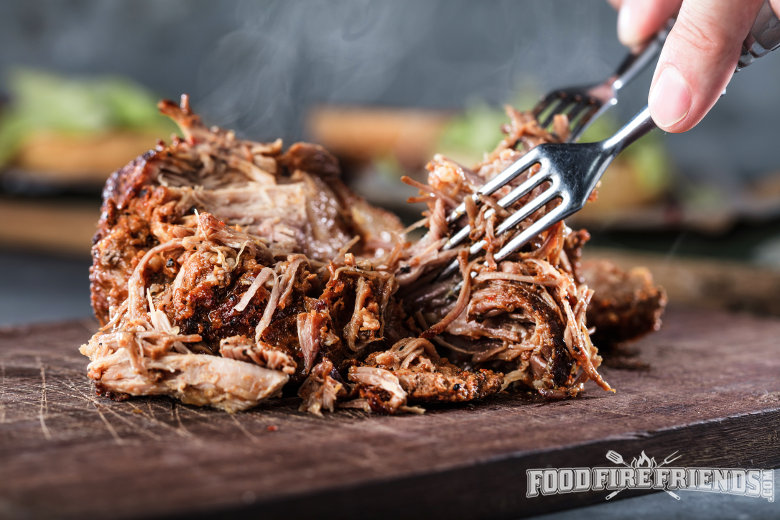 Hi. I'm Mark Jenner, owner and creator of FoodFireFriends.com. I grill and smoke food outdoors at least three days a week on a wide range of equipment, have done so for years, and love nothing more than cooking good food, over live fire, enjoying it with friends. The aim of this site is to educate and help others to do the same.

12 thoughts on “Pork Butt Fat Side up or Down? We Settle this Once and for All!”

Hi, I’m Mark Jenner. On FoodFireFriends I share all the knowledge, methods, techniques and recipes that I pick up on my journey towards mastering outdoor cooking.

Learn More About Me

Come join me on your favorite social network from those below!