Resting Meat — How Long? Why? What’s the Benefit? Is There Any Point?

Why do we rest meat? What is the science behind it? Is it worth doing, or is it pointless and just somehow ingrained into our psyche? This guide digs into the facts, dispels the odd myth, and answers all your questions on resting meat. 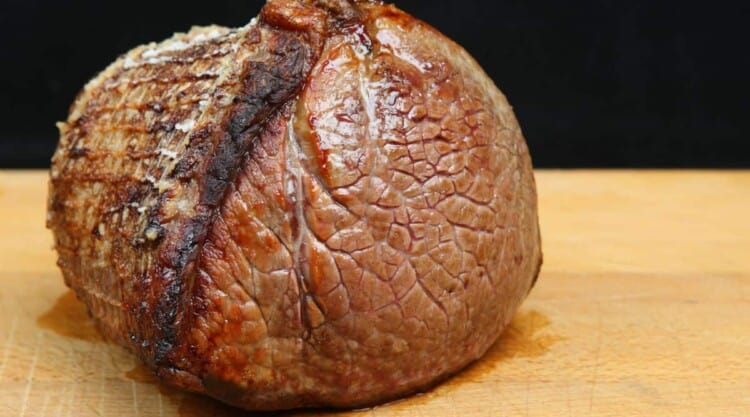 If you read almost any recipe or article about cooking any type of steak, chop, or roast; a common piece of advice that’s given is resting meat before you serve, to make it tender and juicy.

You’ll be told to rest steaks for at least 15 minutes, and larger cuts like a brisket, prime rib or a turkey for half an hour or more, and you were probably told to tent the meat in foil.

But is it really necessary? What is the benefit of allowing our meat to rest? What is the science behind resting our meat? What will happen if we cut into it right away? Wouldn’t the meat get cold?

These are the questions we answer below.

Why Does Meat Need to Rest?

According to James Beard Award Winner J. Kenji López-Alt, the reason to rest meat is simple: if you cut into it immediately after cooking, the juices inside run out, leaving you with a tougher and less flavorful piece of meat.

Kenji López-Alt conducted an experiment where he cooked 6 near identical steaks to an internal temp of 125 °F, then removing them from heat and slicing each in half at 2.5-minute intervals and placing the sliced pieces on plates to collect any juices that run out.

The results are shocking, with the steak immediately sliced having a large pool of liquid, while the steak that had rested 10 minutes having almost zero liquid on the plate.

What is the Science Behind Resting Meat?

In his article, Kenji López-Alt explained that the common belief for resting meat was because once a piece of steak hit a hot pan or grill, the juices inside would be forced towards the center. By allowing the steak to rest the juices would have time to redistribute throughout the steak evenly.

He goes on to explain that it’s not that simple.

Meat holding its juices has more to do with the temperature of it than anything else. He compares the fibers in the meat to straws, and the higher in temp it is, the tighter the ends of the straws are.

Resting Meat Myth — Why Maybe We Shouldn’t Rest Our Meat

Craig “Meathead” Goldwyn is a New York Times Bestselling Author and self-proclaimed “Barbecue Whisperer & Hedonism Evangelist.” On his website, AmazingRibs.com, he has employed food scientists to help him bust food myths, and he takes exception to the common logic that meat must be rested.

On his website, he has an entire article dedicated to why he considers it a mistake to rest meat. Throughout the article he gives many good reasons not to rest the meat:

What is the Science Behind Not Resting Meat?

Among the team of people Meathead employs on his website is a science advisor name Dr. Greg Blonder. For his article on resting meat, Dr. Blonder conducted some experiments on both small and large cuts.

First, he prepared and cooked two 13.5 ounce ribeye steaks using the same cooking method; he immediately carved one steak (he cut the steak entirely, not just once like Kenji López-Alt) on a cutting board, and rested the second steak 30 minutes before carving.

The steak that was carved immediately had lost 27 grams of liquid, and the rested steak lost 23 grams; a difference of 4 grams.

Considering that the steaks were 13.5 ounces in weight to start and that 4 grams is less than 0.15 of an ounce, it certainly seems that the liquid retained due to resting is almost nil.

What About Large Cuts Of Meat?

So far we’ve only talked about steaks. When you compare a 13.5-ounce steak to a large cut like a 14-pound packer brisket, it’s easy to see that the steak is a much smaller cut with not as much liquid to potentially lose as a brisket.

Many of the world’s top barbecue joints hold their meat for 2 – 3 hours in a Cambro or warm oven, allowing it to stay hot without risk of drying out or overcooking it; while also allowing the moisture inside to redistribute.

“My observation is that this rested barbecue, which could be two to four hours or more held this way, is the best ever produced.“

That’s a solid vote for keeping your food warm and resting it if you ask me!

Why Would We Rest a Large Cut Of Meat?

Remember Kenji López-Alt and his theory about the higher the internal temp of meat is, the easier it is for juice to come out once it is sliced? It turns out he was right.

As explained by the world’s only full-time Barbecue Editor Daniel Vaughn, the internal temperature of a fully cooked brisket is around 200 °F.

While citing author and restaurateur Adam Perry Lang, Vaughn explains that the fat and collagen in brisket turns into gelatin as it cooks, and that gelatin is the main ingredient in Jell-o. Hot Jell-o is liquid and would run out onto the cutting board when sliced, but once cooled it will stay inside the slices once cut, keeping them juicy.

How To Rest Large Cuts at Home

The good news for backyard pitmasters is that you can replicate a Cambro or warming oven at home. Meathead has a sure-fire method described on his website for how to create what he calls a “faux-Cambro”:

You can hold a big pork shoulder or brisket for many hours like this.

There is an additional benefit to resting large cuts of meat; it provides flexibility when cooking.

A packer brisket can take anywhere from 10 to 20 hours to cook at home, dependent on the size of the joint, the animal it came from, fat content and the cooking temperature.

By allowing your meat to rest in a faux-Cambro you don’t need to worry too much about making your guests wait. You can take it off at 1:00pm, rest it in your cooler, and serve at 5:00pm.

When it comes to smaller cuts of meat like steak, it’s apparent that there isn’t much to gain by resting, but there is much to lose.

If we simply look at the methods used in J. Kenji López-Alt and Dr. Blonder’s experiments, there are two important things to consider:

When I cook a steak at home, it probably takes a good 5 or 6 minutes for me to bring the steaks inside, get them onto individual plates, get the sides ready, set the table, pour a glass of wine, call the kids to eat, etc. Then when I cut into my steak, I don’t cut directly into the middle, I start on one end and work my way across. I’m betting you do these sorts of things as well.

The point I’m trying to make, is that even though I didn’t add an extra step of deliberately resting my meat, my steak has had some time to rest. As well, I’m not going to cut it into 20 pieces allowing a lot of juice to run out, and the longer it takes to eat my steak, the longer it is going to rest.

When it comes to larger cuts, it does appear that resting meat can be very beneficial. Large roasts and cuts like brisket and pork shoulder can stay hot for hours in a “faux-Cambro”, while allowing the juices inside to redistribute evenly.

What do you think? Do you usually rest your meat at home, or do you simply just serve it when it’s ready?

Please do let us know in the comments below your thoughts on resting and why? What you typically do, and if you’ll be making any changes after reading this article.

How to Defrost Chicken Fast — and Above all, SAFELY!