Today, we take a look at the much-prized, buttery rich flavored ribeye steak. A prime cut, available both bone-in or bone-out, it is favored by those who chase a deep, beefy flavor over anything else, such as ultimate tenderness or leaner alternatives. 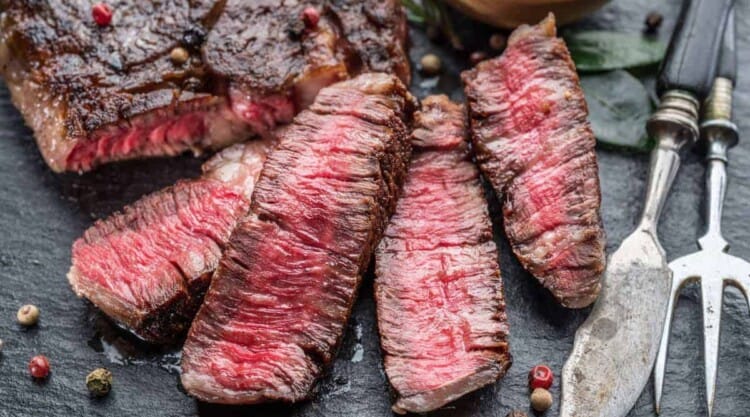 What is a ribeye steak? It’s an outstanding classic that everyone has heard of…I think?!

This cut is known by a few names, my favorite of which is the ‘cowboy steak’, and when cut large with the bone trimmed and exposed, it looks like a formidable meat masterpiece.

When you ask steak connoisseurs what their top three steaks are, the answer is usually the porterhouse, filet mignon, and the ribeye.

While the first two are usually touted as moist and succulent because of their lean nature and lack of fat, a ribeye fan waxes lyrical about the intense beef flavor that comes from its marbling.

In this comprehensive guide to the ribeye, we will discuss topics such as what it is, where it comes from, and why it’s so great.

We also cover how and where to buy a good quality specimen, and how to cook it to perfection with some of our favorite recipes.

What is a Ribeye Steak?

It is a cut of beef that, as its name gives away, it’s part of the rib section of the steer, cut from the rib, the upper rib in fact, that is enriched by a layer of fat surrounding the tender ‘eye’ that separates the two muscles it’s comprised of.

Usually known as a ribeye once the bone has been sliced away, or as a ‘rib steak’ if the bone is left in.

With or without bone, it is a medium to large steak that, on average, will be anywhere between 9oz and 12oz in weight (without the bone) and around 1 to 1 ½ inch thick.

This thickness is important for the ribeye, because if it’s too thin, it becomes easy to overcook.

Here’s a quick video on how to cook it well.

Where Does Rib Eye Steak Come from on the Cow?

This steak comes from the rib primal, and the rib cage situated under the front section of the backbone.

They both fall between ribs 6 and 12, and as both these muscles engage in minimal exercise, it means, as a whole, it’s nice and tender.

This section of the cow has more naturally occurring intramuscular fat known as marbling compared to many other areas too.

The reason ribeye is easily recognizable to most is it’s magnificent ‘marbling,’ a term that refers to the thin white strips that run through the meat.

Marbling is intramuscular fat ribbons, (between the muscle fibers) that breakdown to tenderize the meat and give it incredible flavor and moistness.

For other juicy and delicious cuts, visit our guide to the best steaks for grilling, and our beef cuts chart and guide. 🙂

Other Names for the Ribeye Steak

It’s called the ribeye because it contains the muscle from the centre, or ‘eye’ of the rib, much like when people refer to the eye of the storm being the most central part.

It’s an easily butchered cut and has been around for as long as people have been eating the mighty cow.

Being one of the original steaks, it has collected a bunch of other names along its journey and is also produced and presented in various forms.

Regardless of what size and look a butcher decides to give it, it must come from the same place and have the essential marbling and fat to be a true ribeye.

Here are some of its other names:

Whichever name you prefer and size you choose, you can rest assured that this steak is a belly filler for sure.

The ribeye is renowned for its tenderness AND flavor thanks to its marbling, and it’s these intramuscular fat deposits that liquify upon cooking, which release extra flavor into the meat and self-baste the steak.

It’s second-to-none when it comes to intense beefy flavor, and you don’t get that richness with leaner cuts of meat like the filet.

It also has a fat cap that has no interconnective tissue, so it stays tender and flavorsome too.

As a worldwide popular cut, the ribeye is typically used as a stand-alone steak.

Recently, however, there have been some derivatives that have gained popularity. One such piece is known as the rib cap, which is a cut that simply takes the fat cap from the whole rib section, essentially ‘stealing’ it from the rib steaks.

The ribeye is known to many as the king of steaks, so some might say this is the king’s crown jewels.

In addition to the above, the ribeye includes a good source of niacin, vitamin B6, vitamin B12, zinc, selenium, iron, riboflavin, phosphorus, and choline.

All in all, it is a nutrient and vitamin dense food choice.

The ribeye is readily available from butchers to supermarkets and online meat markets.

Most will sell it in its various weights and presentation guises, so you will be spoilt for choice. And if a butcher doesn’t know what the ribeye is, then he probably isn’t a butcher!

When buying online, you will have a choice of good, better, or top quality beef with varying prices, so be sure to do your homework on what is right for you and your ethical stance on cattle rearing and production.

Where to Buy Ribeye Steak Online

Online food shopping allows you to sit back, relax, and browse all the available cuts and offers available from quality meat producers.

You can see the origins and ethos of each meat provider and decide which ticks your boxes, and then your order will be shipped to your door ready for you to use.

Here are three online outlets that sell some of the best rib eye steaks available:

Due to its popularity, it is well known and sought after, so the price is premium wherever you purchase it.

At the time of writing, the cost per pound for standard rib steaks varies from $23-30 per lb. across online outlets.

Portion Size: How Much Ribeye Steak Per Person?

How much steak you need per person is dictated by the appetite of those you feed, how you cook it, and what you serve it with.

But for ease of reference, on average ther weigh 9oz to 12oz per steak.

Once cooked, the rule of thumb for a good beef steak is a reduction in weight of 25%. So, one steak per person with a side and vegetables will satisfy most people’s hunger.

How to Prepare Ribeye Steak for Grilling or Smoking

From a good butcher, a ribeye will already be trimmed to perfection either with or without bone and be ready to place straight in the grill or smoker.

You can grill it, but extra care must be taken due to the fat content, which released on to flames can cause some flashback from the fat igniting. So if you aren’t a fan of burnt steak, keep a close eye when it’s on the grill.

You need only a good seasoning with salt and pepper in preparation to cook it, though if using pepper add this AFTER searing, because it can burn and turn bitter.

If you intend to smoke the ribeye, a coating of extra virgin olive oil is advised before seasoning as the cooking process takes longer, and this will allow the meat to retain moisture.

How to Cook Ribeye Steak on a Grill or Smoker

The ribeye is best cooked either in a sizzling hot pan or indirectly on a good grill or hot, flat top griddle.

An open grill does have the danger of igniting the rendered fat on open flames, so some caution is advised, and you need to pay attention and manage the cook.

Cooking on a griddle collects the fat in its ridges, preventing any flare-ups, but prevents the meat from absorbing any smoky charcoal flavors.

Here’s our simple guide to cooking your steak in a pan or on a griddle:

3 Best Ribeye Steak Recipes from Around the Web

Now that you know how good the ribeye really is in all its unadulterated glory, it’s time to take a look at a few recipes that will show you alternative ways to cook it and what sides to pair it with:

This simple recipe starts with a salt and pepper seasoning and olive oil, and then smokes the ribeye to perfection, reverse searing it on the grill before pairing it with 2 intense sauces to add flavor and excitement.

The first is a spicy chimichurri sauce, and the second a smoky blue cheese sauce.

From a self-confessed foodie blog comes this easy meal or snack.

The ribeye is cut into 2-inch square chunks and rubbed with Cajun spice then seared in a hot pan for 2 minutes each side.

Then comes the signature finish, they use the pan juices to create a garlic butter that they pour over the bites before serving.

This one will really tickle your taste buds.

Not your usual steak pairing, a hash is normally associated with ground beef, not steak. The secret is the beef is kept as a steak and the rest of the ingredients make the hash.

It includes sweet potato, cashews, sprouts, and cranberries, as well as a vinegar and feta finish.

Head here to see how hashtastic this recipe really is.

The ribeye is the king of flavor. Not only does it deliver a huge beefy backhand to your taste buds, but it does so while maintaining the tenderness of any other top tier steak.

So, whether you’ve been living under a rock and never heard of this cut, or you’re a ribeye aficionado, head to one of our linked recipes and go get your steak on!

However you decide to cook it, let us know your secret to perfection in the comment section below.

BBQ Myths Debunked – 41 Things You Thought You Knew About BBQ

Porterhouse vs Ribeye: What’s the Difference and Which is Best?