How to Get Crispy Pork Skin and Make Crackling — Right Every Time!

Get crispy pork skin — or even better, full on crackling — by following the simple tips in this guide, that work every time. We also cover a few things to avoid, because you can sabotage your crackling even when you think you've done everything right...when you haven't! 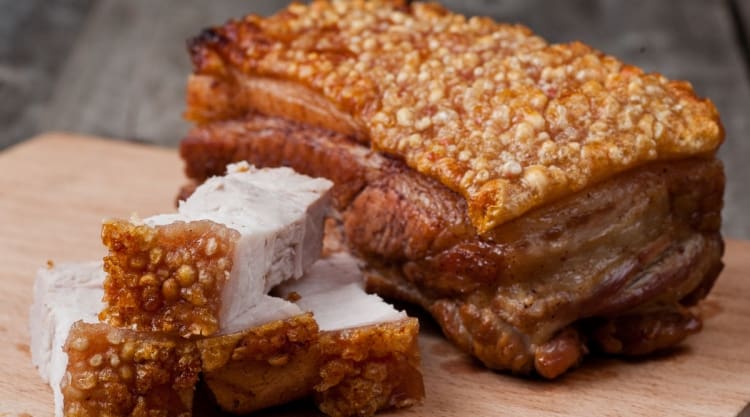 Let’s talk about one of the most sought-after techniques for the grill — how to get crispy pork skin and how to make crackling. It doesn’t happen by accident!

Have you ever noticed how important texture is to your enjoyment of what you’re eating? No matter how great the taste may be, if your food or drink feels unpleasant in your mouth, you won’t enjoy it.

Of course, texture is a matter of personal preference. It’s why some people prefer brownies to cake, or why bubble tea can be either nauseating or a must-have; it all depends on what feels right to you.

With BBQ, though, virtually everyone agrees that crispy pork skin is fantastic.

Here are some of the best tips I’ve found and use to help you master your pork. Plus, I’ll explain the difference between crispy skin and the legendary ‘crackling’ pitmasters compete over.

Crispy skin and crackling are very similar. In fact, crackling is crispy skin taken just that little further until it puffs, blisters, and cracks. Regular crispy skin stays flat and may even take on a glossy appearance.

It’s important to note that “crackling” or “cracklin” is often used to refer to slow-roasted or deep-fried pork rind. In this case, it’s a separate food item, not a feature of a larger cut. I’d argue this is the most common meaning of the term in many parts of the United States. The stuff is highly addictive and delicious.

You’ll also find that many chefs and sites make no distinction between crispy skin and crackling. That’s partly because they either don’t know or don’t care that they’re not the same thing, and partly because “crackling” gets you more hits from search engines.

So we’re clear right upfront, I consider them two different things, so we’ve got a section dedicated to each.

How to Make Pork Skin Crispy

Let’s start with a few tricks for a simple, crispy outer layer on your pork roast and other skin-on pork cuts.

Start With a Dry Surface

To be crispy, you need an absence of moisture, naturally. That’s why we put moisturizing lotion on dry skin to keep it smooth and supple. Before your pork hits the grate, be sure to pat it thoroughly dry with a paper towel.

For even better results, the gang at Barbecue Smoker Recipes suggests letting the pork rest uncovered on a plate in the refrigerator for at least 24 hours. It’s perfectly safe at that temperature for a day or two, and you’ll lose a lot of moisture to evaporation.

Tighten the Skin With Boiling Water

If you’re reading this article in order from start to finish, then you know I literally just told you to dry out your pork. Now I’m telling you to douse it in water. What gives?

Hot water tightens the skin across the surface, smoothing out water-trapping wrinkles. Be sure to dry the skin after you finish with the water.

Using a sharp knife, score the skin across the width of the cut. Be careful to slice just partway into the skin; you don’t want to expose the meat, or you’ll risk drying it out.

Scoring exposes more surface area, allowing better heat penetration. Over at Cooker and a Looker, they recommend cuts about every half-inch. If you’re into metric, try slicing every 1 cm.

Salt has a natural talent for pulling out moisture. That’s why it’s used in brines and curing; it pulls out the moisture that causes meat to deteriorate.

Give your pork a good all-over rub, and from all the different types of salt we recommend using either kosher or sea salt before hitting the grill. Remember to scrape and rub off the extra salt after it’s been cooking on the grill for a while.

Tenderize the Skin With a Mallet

Yes, this is one of those rare times when it’s acceptable to beat your meat in public.

Bon Appetit recommends you tenderize your pork’s skin with the jagged side of a mallet for a few minutes to help make it crispier.

They don’t explain why this works, but it likely has something to do with breaking down proteins, increasing surface area, and reducing folds and wrinkles.

How to Make Pork Crackling

Most of the same techniques used for “regular” crispy skin also work for crackling. You want as dry a surface as possible to start, and you want tight skin. Therefore, the boiling water and refrigerator drying tips both apply here.

Score in a Grid Pattern

As we’ve already learned, exposing more surface area helps pork skin become crispier. By scoring a grid pattern into the rind, you end up with rows of cubes across the surface of the meat. This helps heat penetrate deep into the skin, so it blisters nicely all over.

There’s a fine line between crackling and burnt-to-a-crisp. But, to reach that line, you’ll need some big numbers on thermometer. We’re talking 450F and higher. But, remember to do the bulk of the cooking with indirect heat. You may need to reduce the temperature near the end of the cook to avoid drying it out.

You can finish with a bit of time over direct heat if you need a few minutes more for perfect crackling.

If you really need a final boost, you could always pop it under the broiler in your oven. That’s what Jess Pryles suggests in her pork belly recipe, and it’s a great idea. Yes, it’s an oven recipe, but it’s a terrific tip for grillers in a pinch.

Alternately, you might try the infrared burner on your grill, if you have one, for some intense heat to get the job done.

Should I Use Oil to Get Crispy Pork Skin?

This is actually a tough question. There are two schools of thought on this, and I thought I knew which one I was in.

Some chefs, cooks, and grill-meisters believe rubbing some cooking oil on pork skin helps encourage crispier skin. If you think about it, it makes sense; we use oil to deep-fry, and deep-fried food is about as crispy as it gets.

On the other hand, oil is a liquid, liquid means moisture, and moist is the opposite of crispy. So WTH?

In theory, the oil will help the fat render out from under the skin, reducing the moisture content. To me, though, you’re asking the oil to do the salt’s job.

After much research, thought, and grilling, my mind remains unchanged — you don’t need oil to get the skin crispy, and it may actually be detrimental to achieving true crackling. You can certainly try it if you want, but I’d suggest applying it as a baste later in the cook instead of as part of the prep.

We’ve covered the “best practices,” as office people love to say. So, what are the “worst practices”? (You never hear that one in board meetings.)

Say No to the Smoker

Yes, smoked pork is amazing. But, the prolonged exposure to low temperatures won’t give you the crisp skin you’re after — that takes heat, and a lot of it. Additionally, we frequently use water pans to add more moisture inside a smoker.

If you really want smoked pork with crispy skin, your best bet is to take it out of the smoker just before it’s ready and hit it with a blast of heat. Try preheating your grill and dropping it in for a few minutes over indirect heat to start that blistering process.

Alternatively, try a kitchen blowtorch, the kind you’d use on crème brûlée to turn the sugar into a crispy sheet.

Marinades add gallons of flavor to food, so we hate to do without it entirely. The trick to marinading pork and still come away with crispy skin is to keep the skin out of the fluid.

Many pork cuts only have skin on one side or covering the top half of a thick cut. It’s totally ok to dry the skin and allow the meat to soak up the flavor in a shallow bowl of liquid deliciousness.

Practice Social Distancing With Your Pork

Years from now, someone will read that subhead and go, “whaaaat?” Right now, though, it’s kinda timely.

Seriously, though, you don’t want to cook anything else on the grill at the same time as your pork. Meat and veg release moisture into the air as they cook, and if crispy skin is Superman, moisture is kryptonite.

Put Away Your Foil

If you’ve read much about grilling meat, you know you need to let it rest after it comes off the barbecue. This allows time for carryover cooking to do its thing, and for moisture to redistribute throughout the meat as the proteins relax.

Many people will cover their meat with foil while it rests. This does two things: It holds in the heat, and it holds in the moisture. Except, we don’t want moisture! To avoid turning your hard-earned crispy skin into rubber, let your pork rest uncovered.

Crispy skin on a succulent piece of roasted pork is one of the greatest gifts your barbecue will ever bestow upon you. The blend of textures and rich tastes is not to be missed.

If you’re one of those people who think pork is a second-class citizen on the grill, try one of these tips (or a combination) and prepare to have your mind changed. It’s that good.

If you know someone whose pork skin game needs a boost, send them a link to this page and help a brother or sister out. We’re like the open-source coding of BBQ — free for everyone!

Thanks for reading, and may your pork skins be perfect.

More From General How Tos

Beef Ribs Vs Pork Ribs, a Comparison of Size, Taste, Cost and More