Porterhouse vs T Bone Steak — Differences and How to Cook Them

Porterhouses are T-bones, but not all T-bones are Porterhouses. Confusing?! We do away with the confusion in this guide by discussing the differences between these two premium steaks. We also discuss how to buy, select and prepare each, and how to cook them. 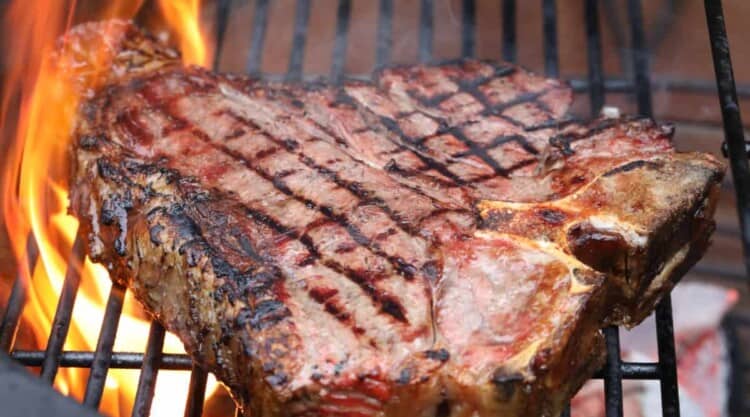 What if the waiter at the steakhouse asks: “Would you rather have a T-bone steak or a porterhouse steak for the main course?”

Do you know the difference? They’re quite pricey and guaranteed to be a quality steak dinner. But, which one should you choose? Most of us can’t tell the difference because they look almost identical.

They both have that signature “T” shaped bone separating two delicious pieces of meat. So when comparing porterhouse vs T-bone steak, how can we tell them apart, and do we even need to?

One side of the T-bone, the larger meat portion is the NY strip (also known as Sirloin or Strip Steak) and on the other side is the tenderloin or filet mignon steak. This extra-lean, super tender meat comes from the short loin, located on the back of the cow and is the most expensive cut.

The distinctive T-bone is the lumbar vertebra or backbone.

See the confusion here? Unlike when discussing a porterhouse vs a ribeye, they both come from the same part of a cow and appear to be similar, so what is the difference?

We hope to clean up any confusion you may have in our following discussion of porterhouse vs T-bone steak. We will show you how to identify the differences, helping you to make the right choice between the two should you need or want to.

The Difference Between T-Bone and Porterhouse Steak

As discussed in depth in our article, what is a porterhouse steak, The U.S. Department of Agriculture specifies T-bone and porterhouse characteristics based on the thickness of the tenderloin section.

To be a porterhouse: The tenderloin must be a minimum of 1.25 inches in diameter from the bone across the widest section on the filet.

With a tenderloin section anything under 0.25 inches, they’re called “Bone-on NY strip” or “Club” steaks.

Porterhouse steaks are cut from the rear end of the short loin and thus include more tenderloin steak, along with (on the other side of the bone) a large strip steak. T-bone steaks are cut closer to the front, and contain a smaller section of tenderloin.

Here are some approximate weights and thicknesses of porterhouse steaks you’ll see in butcher shops and restaurants:

The difference is the amount of tenderloin in the steak. So with porterhouse, there are two different cuts, one better than the other.

Where do they Come From on a Cow?

T-bones are taken from the loin primal of the cow, the first primal to the rear of center on the animal. And of course, so does the porterhouse.

If interested in steak cuts and where they come from, you should definitely check out our beef cuts diagram and guide! 🙂

The Secret of Buying a Quality Porterhouse Steak

Not all porterhouse steaks are equal. The steaks with the largest piece of tenderloin aren’t necessarily the best. Here’s the secret.

The end of the short loin, about the last 6 inches, is where the tenderloin is the widest. On the sirloin side of the steak, you’ll see what looks like a smaller steak attached to it. That piece of meat tends to be chewy, and the connective tissue is a tough piece of sinew that divides the two.

Look for the porterhouse that has a generous portion of tenderloin and a solid piece of strip steak on the other without the extra piece and dividing line.

To see the secret of how to buy a quality porterhouse, check out this video.

Another way to ensure you’re buying the right steak is to use the IMPS number.

Got a Big Party? Use IMPS Numbers to Order Your Steaks

If you’re planning a huge party, or you run a restaurant or catering business, then order by the numbers.

The USDA has standard specifications for every cut of meat. Each cut has a corresponding number used to specify it when ordering. You can find the specs and numbers in the guide known as the Institutional Meat Purchase Specifications (IMPS).

Although the IMPS recommends some specifications, they are voluntary. However, it’s a common practice for most butchers to use these codes for standardization and easy reference. So next time you need to order in quantity, use these numbers:

How did porterhouse steak get its peculiar name? Although they cannot be proven, I dug around and found some good stories about the origin of the name.

Where to Buy Porterhouse Steaks Online

The average weight of these steaks is 1 pound per steak.

Is Charles Dickens Responsible for Naming the Porterhouse Steak?

When you search around for the name “Porterhouse Steak” you’ll find more than one source claiming to be the original namesake.

During the 1800s, travelers across the United States often rested at a lodging known as a ‘porterhouse.’ Back then people traveled by train, horses or coaches, so these guest houses were close to a railroad or coach stop. These places provided both food and lodging for those hungry and tired travelers. We know that the sweet dark ale got its name from the ‘porters’ who drank it. See the connection here?

In a 2005 N.Y. Times Q & A piece titled, “A Juicy Story,” author Michael Pollack credits a New York porterhouse owner, Martin Morrison, with inventing the name around 1814. He is mentioned in a book called “The Market Almanac” published in 1867.

Morrison is said to have fed a sea captain who was hungry and “empty as a gull.” The captain insisted on having the same type of steak each day, and it soon became popular. Somehow the steaks and the name caught on. Although there is no proof that it happened, the Oxford English Dictionary credits Morrison for the name.

They’re a few other versions, but the best story of all is the one about Charles Dickens, the Author of “A Christmas Carol.”

According to the Cambridge Chronicle, the hotel owner began advertising his large T-bone steaks that Charles Dickens adored as porterhouse steak and made his fortune.

Of course, there is little proof of anyone’s claim so any of these stories could be true. However, there is evidence that the “porterhouse steak” was a common term in the late 1800s. Mark Twain (Samuel Clemens) even wrote how he longed for a thick juicy porterhouse steak in his 1880 book, “A Tramp Abroad.”

Regardless of the name’s origin, this expensive piece of meat needs to be cooked the right way.

Because T-bones have two different types of meat, you’ll want a fire with 2 zones.

The filet has very little fat and will cook faster than the N.Y. strip side. The strip loin has plenty of fat to self-baste, so you’ll want to use more heat.

Set up a 2-Zone Fire and One Safe Zone

If you aren’t using gas, use 100% natural wood charcoal. Charcoal burns hotter than briquettes, and it has no additives that could alter that heavenly beefy taste.

Once you have your charcoal grill going and glowing, try and make three different areas in the bottom of the grill. 1/3 with a double layer of charcoal, 1/3 with a single layer and 1/3 without coals for a safe zone if you have a flare-up. (a slightly different take on the classic two-zone grilling set-up.)

Most steak lovers agree that coarse salt and pepper are all you need to season a steak properly. Adding garlic and other spices are personal preferences.

Keep Your Fire Hot and the Grill Oiled

If you don’t have thick steel or cast-iron bars for your grill grates, they are worth getting. They retain the heat longer and leave better grill marks.

Oil your grate just before setting the steaks on. You can use oil on a paper towel, a piece of fat skewered on the end of a fork or cooking spray. Be very careful with cooking spray as the propellant is flammable.

Get Those Steaks On!

Place the steaks with the strip side over the hottest part of the fire and the filet over the single layer of charcoal. Leave them for 2 ½ to 3 minutes. Turn them 90⁰ or a quarter turn to make perfect grill marks. After another 2 ½ to 3 minutes, flip the steaks and repeat the process for that side.

After you remove the steaks, give them a rest for about 8 to 10 minutes before cutting. They will continue to cook and increase another 5 degrees.

Tips On Choosing and Grilling a Fabulous T-Bone Steak

Here are some guidelines that will guarantee you a great steak every time:

Whether it’s T-bone or porterhouse, when you prepare and grill them right, they’re one of the most flavorful, juiciest meats you’ll ever have on your plate.

Share Your “King of the T-Bones” Feast With Others

So next time you’re thinking of grilling a T-bone, do something different and upgrade to a porterhouse.

Get the thickest cut you can. A thick porterhouse will feed two to three people and leave enough for steak hash the next day.

Leftover steak tastes great and is the perfect ingredient for soup, beef, and beans chimichangas, quesadillas, a salad topping or even in your breakfast omelette.

Porterhouse vs Ribeye, What’s the Difference and Which is Best?

Can You Reuse Charcoal? Yes, These 8 Ways so Don’t Throw it Away!