What is Sirloin Steak? Identification, Where to Buy, How to Cook, and More

Sirloin steak is a popular beef cut that is fuller flavored than fillet and leaner than a ribeye. Find out all about it, what muscle it is, where it comes from on a side of beef, where to buy it, and how to cook it with three of our favorite recipes. 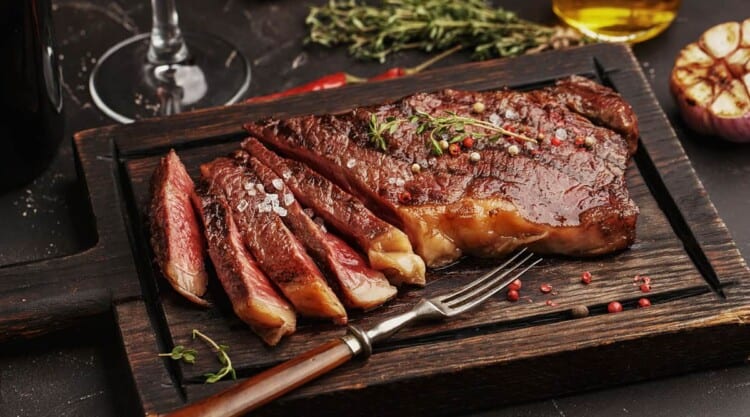 The sirloin steak comes from the sirloin primal, and there’s nothing elusive about this cut, it’s a plain and simple good ol’ steak that the majority of people love!

Always finding itself high up on the favorites, we thought that we should serve up this sirloin guide to help ensure you know all there is to know about it.

From its flavor and texture to where to get your hands on it, along with some of the best recipes around, after reading this guide, you’ll be a sirloin specialist.

So, whether you’re a grilling beginner or a hardcore enthusiast, there’s a lot of info in this guide that will up your BBQ game for sure.

Note: We also have a beef cuts diagram you can check out, that shows all the popular cuts of beef and where they come from.

What is sirloin Steak?

One of the most popular steaks for grilling, the sirloin steak, also commonly known among those in the know as the Top sirloin steak, is a versatile cut that is juicy and delicious.

It sits in the sirloin primal next to the loin, which is a step away from the home of other famous cuts such as the Porterhouse and the T-bone steak.

Nearly always gracing the menu pages of every restaurant around, you’ve probably had one of these guys at some point in your life.

Where Does Sirloin Steak Come from on the Cow?

The sirloin steak comes from the sirloin primal, which runs from the 13th rib all the way to the end of the hip bone.

The sirloin primal is split into two sections:

In the middle of these two cuts, the Tenderloin cut can be found.

What is Sirloin Steak Also Known As?

Legend has it that the sirloin steak is called as such because Henry VIII was so impressed by it that he knighted it and called it ‘Sir Loin,’ and the name has stuck ever since.

Whether this is true or not, no one knows, but it’s a story that sounds good to us!

There are many other cuts with sirloin labels, such as sirloin tips, sirloin flap and even petite sirloin, which are all very different pieces.

So just in case there’s any confusion at the counter, the Industry ID for the sirloin steak is 1184 (IMPS/NAMP).

Top sirloin steak is lean, juicy, and described as moderately tender, with a medium strength beef flavor. So if cooked right — chefs preferred temp of medium rare, approx 130 F measured with a meat thermometer — it can be a real winner! Cooked higher, it will be less tender.

It has very little fat or marbling running through it, and it can come with or without the fat cap on.

The sirloin steak makes a great stand-alone steak and is perfect simply grilled with a side dish of chips and vegetables.

Because it is a lean and quite affordable cut, it’s often used in a variety of dishes from Italian pasta to Chinese stir-fry.

It is also commonly used in Latin American countries because of their love for the Picanha, as described above.

This cut is always in high demand, and can be found in almost every supermarket and butchers. You’ll never have a problem finding an outlet near to you that will sell it.

You just have to make sure that you get there early enough before the local grill King or Queen snaps them up before you do.

Where to Buy Sirloin Steak Online

It’s this reason why online meat markets were created, so that you can place your order at the beginning of the week, and know that no matter how long you sleep in at the weekend, the steaks will be delivered straight to your door whenever you want!

Not only is it stress-free, but it also means you can peruse the wide variety of cuts available and gain a meaty education along the way.

Here are some of the best outlets around that stock it:

Available as 6oz or 8oz cuts.

To check on the provenance, click the button below, select your desired steak, and read up on the farmers each steak is sourced from.

It’s quite affordable, and at the time of writing, it can be bought between $18 and $28 per-pound.

There are other grades of sirloin steak that can be purchased on these websites, such as Gold Grade Wagyu sirloin, and these higher-quality cuts come with a higher price tag.

If you’re a little curious about the sirloin cap, or the picanha, and want to impress the family, then this can also be found here.

Portion Size: How Much Per Person?

Sirloin steaks typically come in at a 6oz or 8oz size, so if you’re serving them with hearty sides, then a 6oz steak per person will be perfect.

Or if the steak is the main centerpiece, then an 8oz steak would be much better.

How to Prepare sirloin Steaks for Grilling or Smoking

Many people, even chefs in restaurants, underestimate the importance of preparation, and it is just as important as the cooking itself!

As with any steak, be sure to take your sirloin out of the fridge around an hour before you plan to cook it, as this brings it to room temperature and ensures that it will cook evenly, which results in a better finish.

Just before it goes into the pan, rub it with oil and season it with sea salt (not table salt).

Some say to season it way before you place it in the pan, but this draws the moisture out of the steak and, in turn, lowers the temperature of the pan slightly, which does not make for a delicious brown crust.

Another thing to remember is that if cooking on high heat, do not season it with pepper until after it’s cooked, as this will burn in the pan, which will result in a bitter taste.

How to Cook sirloin on a Grill or Smoker

The sirloin can be either grilled or smoked, and both methods achieve a banging beefy hit!

As per our guide on how long to cook steak, with a cut that is 3 cm to 4 cm thick, you can place it on a grill that has already reached a high heat for around 2 to 3 minutes each side until the desired doneness is achieved.

With so many grill instructions readily available, we thought we would give you our favorite way to smoke the sirloin:

Three Best Sirloin Steak Recipes from Around the Web

Being such a popular stand-alone steak there are plenty of recipes about for the sirloin, but here are some of our favorites that give it a little twist:

Sirloin steak and peppercorn sauce go together like beers and BBQ, so you can’t argue with this recipe.

With roasted square chunks of potato drizzled in caramelized onion, it is packed with taste and bound to impress!

For this French twist on a classic dish, head over to this page: Sirloin, Lyonnaise potatoes and peppercorn sauce recipe.

If you like it hot, then this recipe is the one for you!

Cut your steak into small chunks and place them on a skewer in between chunks of red bell pepper, smother it in hot sauce and garlic, and you’re good to go.

If you think you can handle the heat, check this recipe out here: Portuguese beef kabobs recipe.

If you’re after a Mexican hit, then we’ve got you covered with this recipe.

Perfectly grilled with hazelnut oil (which apparently makes all the difference so make sure you try it!) and covered in homemade chimichurri sauce, this will have all your guests coming back for more.

If this sounds like a bit of you then check out this recipe: Sirloin with chimichurri recipe.

Is Sirloin a Good Cut of Steak?

Whether you have it as a stand-alone steak with a simple side, or add a Portuguese or Mexican twist to it, you are bound to love this knighted steak!

What is Strip Steak? Where is it From? How to Perfectly Cook it

What is Shoulder Steak? What is it Good For? How do You Cook it?