Picanha steak is a Brazilian favorite, sublime with chimichurri, and a cut you really should seek out and try for yourself if you haven’t yet! Learn where it comes from on the cow, alternative names, where to buy it, and how to cook it with three top recipes. 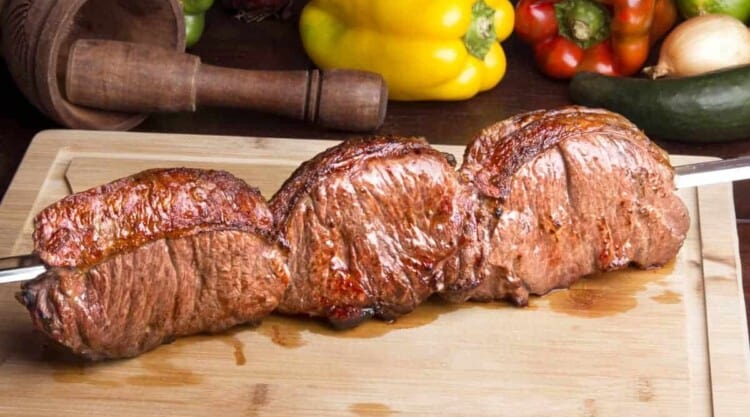 Ask any steak fan if they know what a sirloin is, they of course reply with a resounding yes. But if you ask, what is picanha? Many of them will look confused and unsure.

Those that do know of picanha will probably have found it in a good Brazilian steakhouse. Traditionally served on skewers with the thick fat cap still attached, it is a sight to behold and a flavor to savor.

So why have you never heard of it?

That’s because it’s often sacrificed in favor of other cuts that come from the same area. That coupled with the recent want for leaner cuts, means that those with a good fat cap often get passed over for those without.

Well, be prepared to be educated, as this guide is the whole enchilada, or whole picanha if you will.

We will show what picanha is, where it comes from, how to get it, and best of all how to cook it to perfection.

It comes from the same cut of meats as the top sirloin steak, and the top section is then cut off to include the entire fat cap and some meat residing just under.

This slab of meat is then cut into steaks called picanha.

This cut normally has the fat cap removed before being sliced into sirloin steaks, or is sometimes sold as a roast without the fat cap. The picanha steak, however, prizes the fat cap as the key to a great tasting piece of meat.

Check out this short video all about picanha, it’s origins, how to prepare and cook it traditionally:

On average the picanha will weigh anywhere between 6oz and 9oz in weight with the fat cap attached, and it is usually cut into ½ inch to 1 inch thick steaks.

Where Does it Come from on the Cow?

It comes from the sirloin primal, more specifically the top sirloin area near to the tenderloin, making up a part of the biceps femoris muscle and its fat cap.

To put that into context, it’s the upper part of the rear leg near to the hip.

Much like the other sirloin muscles, it’s relatively underused and as such very supple and tender, and is where some of the very best types of steak are cut from.

Marbling and the generous fat cap all add to the incredible flavor when it cooks and renders.

Many butchers portion this area of the sirloin primal into other cuts such as the rump, the round, and the loin. So picanha isn’t seen too often.

Other Names for the Picanha

Like many cuts, it has picked up many monikers through the ages, some are indicative of the muscle or area of the steer that it originates from, others are a little more general.

For the record, picanha itself is named after a pole that farmers used while herding their cattle.

Here is a list of the other names that it sometimes goes by:

Being an often overlooked piece of meat, picanha steak can sometimes be hard to find.

If your butcher hasn’t heard of it, simply give them the industry ID, IMPS/NAMP – 1184D, UPC–1421, which will bring up all the information they need to find it.

The picanha is renowned for its flavor and juiciness.

When cooked right, both the fat cap and the marbling play a major part in giving it a melt in the mouth texture, easy chew, and a buttery, earthy flavor.

The meat itself is somewhat tougher than most steaks, a little more dense, but is still quite tender, particularly when prepared and sliced correctly.

Traditionally used in Brazilian cooking as a skewered meat grilled over open coals, this is the classic way most restaurants will serve it. They take the entire top sirloin cap and divide it into several steaks that are then curled onto skewers and grilled until juicy with a crisp fat cap.

However, it has gained popularity and mainstream exposure recently, with many choosing to cook it as a whole roasting joint in a smoker, or as another standalone steak that can be grilled like any other.

The picanha is an elusive meaty beast that is not readily available from supermarkets, and when it does make the odd appearance, it isn’t around for long.

So, your best chance of getting your hands on some is to order it online or ask your butcher to cut it for you!

Where to Buy Picanha Online

Online food shopping takes all the hassle out of obtaining the best pieces of meat. It involves no trudging around supermarkets or awkward conversations with a butcher. You merely sit back, relax, and order.

Then your chosen meat will appear at your door as if by magic, leaving you more time to do what’s important: Cook and eat!

Here are three online outlets that sell some of the best picanha available:

Crowd cow has a good selection of picanha, from full roasts to individual ‘coulotte’ steaks cut from the roast, pasture-raised beef, and Japanese A5 wagyu.

All picanha is tender and juicy, but you have to see the wagyu picanhas and the coulotte cuts marbling because it’s just insane, and a relatively affordable way to experience wagyu too.

Porter Road sells a pasture-raised, hormone and antibiotic-free, shipped fresh picanha, sold either as a whole roast weighing between 3 and 4 lbs, or if a whole picanha is too much, they sell it cut into individual steaks — weighing between 0.65 and 0.8 lbs.

The meat is dry-aged for two weeks minimum to produce the most flavorful and tender cut possible.

Snake River Farms picanha is from their American Wagyu Black grade range, which has a higher marbling than USDA prime, making it incredibly tender and delicious.

Cut in the traditional way with the fat cap still intact so you can cook it the Brazilian way, it weighs an average of 2 lb so it can feed many mouths.

Being relatively unknown, it can be found for a good price, but is somewhat unpredictable. Some outlets will sell it at value prices as they don’t know what demand there is for it, or they realize its potential and charge accordingly.

At the time of writing it is priced at between $20 and $30 per lb across online outlets.

Portion Size: How Much Per Person?

For ease of reference, a picanhas a whole piece of beef averages around 2 to 2 ½ lb.

So how much you cook is relevant to what you serve it with, and the appetite of your chosen audience, but one steak with a few sides will be plenty here.

We always recommend a good 1/2 pound or so of beef to satisfy a healthy appetite.

How to Prepare it for Grilling or Smoking

From online meat outlets, the picanha usually comes as a large lump of meat with the fat cap attached.

If cooking or smoking it whole, you will need to score the fat cap in a crisscross formation as you would a ham joint. This will stop the fat shrinking and distorting the meat.

If cooking as individual steaks, you can either slice them yourself to grill as you would any other steak, or you can place them onto a skewer ready for grilling.

If any of the tough membrane and silverskin is still attached to the underside, be sure to remove it with a sharp knife.

Bring to room temperature and simply rub with kosher salt, not table salt! (For more on this, check out our article on the different types of salt.) This will be enough seasoning, at least for the first time you cook it so that you can enjoy it in all its unadulterated glory.

How to Cook Picanha on a Grill or Smoker

The classic picanha is best cooked over indirect heat on a hot grill, placing your meat skewers around the heat.

Placed over open coals will ignite the rendered fat and cause flare-ups that will burn the meat, so it’s best to cook just off from direct.

Here’s our simple guide to cooking your picanha on a grill.

Three Best Picanha Recipes from Around the Web

So, you know what it is and where to get it, and you can only imagine how good it tastes. It’s time to decide what recipes you should try!

Here are three recipes that show you a traditional, alternative, and downright tasty ways to eat it. So take a look and get cooking!

This simple recipe starts with salt and pepper seasoning, then grills the steaks to perfection before pairing it with a classic Brazilian side – egg farofa, which is onions, eggs, and flour.

This detailed guide will show you how to prepare perfect rotisserie picanha on your grill with a little garlic kick.

The key is good preparation of the steaks and resisting the urge to dig in straight off the grill, just let it rest.

This is one for the taste buds with its thick crust that packs a punch. The key is a good dry rub that gives the meat a real crunch after being smoked low and slow for a good few hours.

Head here to see how fantastically simple it is: Blackened smoky picanha recipe.

The picanha is a new and exciting arrival on the BBQ scene for many of us. It is a lot of meat for not a lot of money and has a depth of flavor that will challenge a good ribeye.

Not only does it deliver a huge hit of buttery beefiness, but it also offers versatility with a great choice of options for what you can do with the cut.

Its big flavor will impress on its own or stand up against strong marinades, rubs and sauces too.

So, that makes it decision time … are you cooking it whole or trying the classic picanha steaks on skewers?

Either way, share your wins with us in the comments below and let us know how you get on!

What is Hanger Steak? Uses, How to Cook it, and More