What is Denver Steak? A Tasty New Kid on the Butchers Block!

The Denver cut steak was only 'discovered' a few short years ago, is new to most of us but is absolutely fantastic. It is well-marbled, flavorsome, and tender, and should be on everybody's shortlist of favorite steaks…and probably will be after trying one. Learn all about it here. 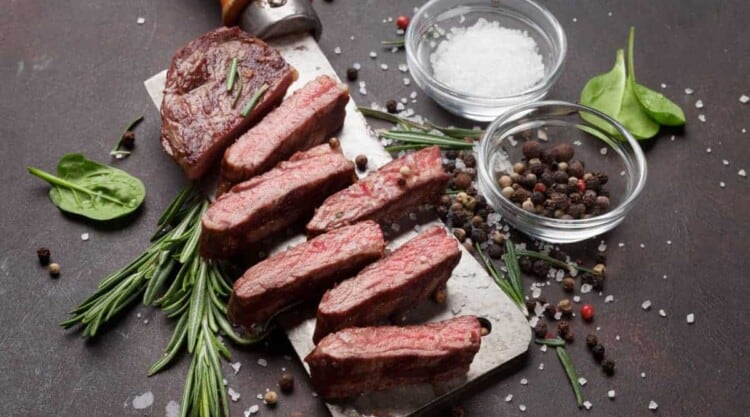 If you’ve never heard of the Denver steak before, then you’re not alone!

This new cut of steak is becoming increasingly popular and for very good reasons. Not only is it delicious, but it’s also relatively cheap to buy compared to other premium and better-known beef cuts.

In this guide, you are going to learn everything you need to know about the Denver cut steak.

We discuss exactly what the Denver steak is, where it comes from, how amazingly tender it tastes, where you can get your hands on it, and a few of the best recipes around to impress everyone at the next family BBQ.

With a few nutritional details and fun facts along the way, you’ll be a Denver connoisseur in no time.

So, without further ado, let me introduce you to this delicious cut.

What is Denver Steak?

It is an incredibly tender cut that has a generous amount of marbling, and it is rich in big beefy flavor. It comes from the chuck region, but buried deep within the cheap and tough primal, and it is full of nutrition and beefy goodness.

Typically, it is 4oz to 6oz in size and ¾ inch thick, and it offers bang for your buck.

If cooked properly, it’s one of the most flavorsome and best steak cuts around, and it has a good amount of marbling, and this means BIG flavor!

Where Does Denver Cut Steak Come From on the Cow?

The Denver comes from the chuck primal, which is a sizeable chunk of meat originating from the upper joint of the arm.

This section is the locomotive muscle of the shoulder that is heavily worked, and for this reason, it is known to be quite tough. It is surrounded by connective tissue and sinew.

For this reason, the chuck is considered to be a low value cut of meat and one of the least profitable for butchers to sell.

However, the Denver steak comes from the Serratus Ventralis muscle, which is concealed deep inside the chuck under the shoulder blade. This means that this muscle is hardly used, making it one of the most tender cuts from the chuck.

Extracted in one piece, any skilled butcher will know to cut the Denver steak against the grain, as this creates maximum tenderness.

If you fancy giving it a go yourself, take a look at this demonstration showing you how to cut the Denver.

It takes extra time, effort, and expertise to cut this steak from the chuck roll, which is why it has been relatively unknown until now.

For more information on cuts from the shoulder, check out our full guide to beef cuts. or head straight to some of our dedicated guides on shoulder cuts such as what is top blade steak, or what is a chuck eye roast, or perhaps the blade chuck steak.

Other Names for Denver Steak

The Denver cut steak was discovered by meat scientist and associate professor at Colorado State University’s Centre for Meat Safety & Quality, Dale Woerner, in the 2000s, so it is a relatively new piece of meat on the butcher’s block.

Woerner was tasked with finding ways to make low-value meat more appealing and valuable. It was here he discovered the “uniquely flavored hidden gem” concealed among the tough connective tissue in the shoulder. Just like the discovery of Tutankhamun’s tomb, Woerner hit the meat jackpot with this one!

As to why it is called the Denver, no one really knows, but suggestions imply that it was only called this because joe public responded well to Western-sounding names in focus groups.

The Denver Steak is also commonly known as:

On a side note and (kind-of) fun fact, Japanese chefs refer to the Denver as ‘zabuton,’ which in Japanese means ‘Zen meditation cushion,’ because of how soft and tender it is!

The Denver is exceptionally tender, and is cut from the most heavily marbled muscle in the entire cow, so you can be sure that this is bursting with intense beef flavour.

To put it into perspective, the marbling in this cut is 2.25 times more than that of the Tenderloin.

It does not have a fat cap, but this does not make it any less tasty than the cuts that do. It has recently been ranked as the fourth most tender cut of beef, so as long as it’s cooked properly, you can be sure it is going to be juicy and downright awesome.

Discovered in America, the Denver is more commonly found and consumed there. However, it’s still relatively unknown compared to other steaks such as the Flatiron steak and Tenderloin.

The most typical use is simply grilled hot and fast to medium rare, allowed to rest, and then enjoyed a straight up grilled steak. Nothing too complicated.

In addition to the above, the Denver is also a good source of Vitamin B6, Vitamin B12, Selenium, Riboflavin, Niacin, Phosphorus, and Choline.

Whilst every butcher should sell the Denver, not all have the time or expertise to cut it. So you aren’t going to find it at just any butchers, and certainly not at commercial supermarkets.

And to make it slightly more difficult, those who do sell it might not even call it a Denver, so remember it’s other names listed above.

To avoid any confusion though, simply show them the industry IDs:

If you can’t seem to find Denver locally, or you haven’t got the time to search for it, fear not, as there is a simple solution. Thankfully there are online meat-markets, where you can browse and order the cuts you want from the comfort of your home.

Here are two online outlets that sell the Denver:

Originally discovered and developed in a bid to produce a flavorsome but lower-cost beef steak, thankfully it isn’t too expensive.

At the time of writing, the cost per pound seems to vary from $12-25/lb across online outlets, with some articles saying they’ve found it in supermarkets and local butchers as cheap as $8-10/lb.

Portion Size: How Much Denver Steak Per Person?

For ease of reference, the Denver is butchered into an average 4oz to 6oz steak. When cooked, the rule of thumb for a good steak is that the weight decreases by around 25%.

So, 1 steak per person with a seriously good side dish or two should be fine for the average person.

How to Prepare Denver Steak for Grilling or Smoking

From a good butcher, it will already be trimmed of fat and excess sinew, ready to ‘rock n roll’ with on the grill or smoker.

Denver enthusiasts will say you need no more than a good seasoning with salt and pepper and maybe a knob of butter for the perfect steak cooked on the grill.

That’s good news on the preparation front, because it doesn’t need anything else to be enjoyed as a good quality stand-alone steak.

But equally, being so tender, it means you can prepare it however you want. It takes well to a good marinade and is incredibly mouth-watering when slow-cooked or smoked.

How to Cook Denver Steak on a Grill or Smoker

The Denver is often at risk of being over-prepared or overcooked due to its links with the tough chuck primal, which has many thinking it needs to be slowly cooked and tenderized.

According to Woerner, the Denver is unrivaled for flavor and should be treated as simply as possible, so, just as the discoverer would, follow these simple steps for the grill:

3 Best Denver Cut Steak Recipes from Around the Web

Now that you know what Denver is, how good it sounds and how to cook it as a stand-alone steak that tastes fabulous, here are 3 recipes we definitely recommend trying with your newfound favorite cut.

This simple recipe takes this cut up a notch to a mouth-watering marinated masterpiece.

It takes the aroma of garlic and acidity of sherry vinegar to balance the punch of Dijon mustard and add masses of flavor to an already flavorful steak.

The key is letting it sit overnight in the marinade to make sure it penetrates into the meat fibres properly.

From the popular restaurant chain comes this rich and flavorsome marrying of ingredients.

They take an in-house cut of Denver cut steak and marinate it with selected herbs and vinegar overnight before cooking it to perfection. They then create a creamy garlic mash potatoes, alongside chargrilled veggies and red wine jus that tops off this utterly indulgent, yet simple, feast.

It must be seen to be appreciated.

Toronto’s North 44 restaurant provides an excellent recipe for those that like a steak and simple salad.

After marinating the Denver in a roasted garlic and olive oil seasoning, he grills the meat as required, with the key being to allow the meat to rest for 10 minutes before slicing.

Placed on top of a salad that includes beets, goats cheese, and arugula, it’s finished off with a drizzle of the meat marinade.

Head here to see how less is definitely more:

The Denver is one of the better cuts out there, and thankfully it won’t break the bank either. The only thing difficult about it is knowing where to find it, but once you do locate it, you won’t regret the hunt.

So, whether you already knew about the delicious Denver, or you are only just hearing about it, try one of our linked recipes above and let us know how you get on!

Do you have any favorite recipes for this cut? Hit us up in the comment section below.

How to Store Meat in Your Fridge or Freezer Safely

What is Hanger Steak? Uses, How to Cook it, and More