How Long to Marinate Chicken for Perfect Flavor Penetration

If you marinate chicken too long, it can go soft and mushy. If you don’t marinate long enough, the flavor doesn’t penetrate. So in this guide, we look at just how long you should marinate chicken to achieve perfect tenderness and flavor penetration. 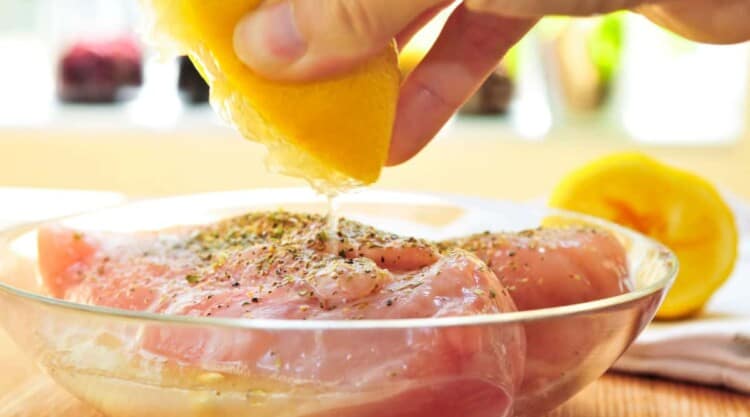 In this article, we’ll explore the mystery of marinade, talk about what goes in it, and, most importantly, how long to marinate chicken to let the flavors go deep and enhance more than just the surface.

Maybe it’s just me, but I feel like chicken is the easiest meat to get wrong on the barbecue. That might be partly because there are three degrees to which a piece of chicken can be cooked: not safe, safe, and burnt beyond recognition.

What is it with the dry, flaky chicken so many people serve off the grill?

Well, I’m here to tell you that delicious barbecue chicken is possible without having to go to a restaurant!

The obvious solution is to cook to a safe temperature and then douse it with barbecue sauce. But why not enhance the flavor of your chicken, instead of drowning it?

My favorite way to prepare chicken for the barbecue is to marinate it. A good marinade adds flavor and moisture, without ever hiding the fact you’re eating chicken.

Now, let’s see if we can’t put chicken in its rightful place — on your grill!

What Is A Marinade, and Why Do We Use It?

At the risk of stating the obvious, a marinade is a fluid in which one immerses a cut of meat to tenderize it, and/or add flavor and moisture.

There are all manner of marinades to choose from, some simple, some complicated, but most can be divided into two basic categories: acidic and enzymatic. Each kind reacts with the meat but in different ways.

Acidic marinades are based on mild acids like vinegar, apple juice, or wine. Acids attack and denature proteins, causing them to form a microscopic mesh that traps moisture in the meat.

Enzymatic marinades use things like pineapple, guava, or ginger. Enzymatic fluids break down the connective tissue and muscle fiber, tenderizing the meat as they do so.

Dairy-based marinades are a third option. Yogurt is a common marinade base, especially in Middle Eastern cuisine. Technically, yogurt marinades are acidic, but the lactic acid is so mild, it interacts much more gently than non-dairy acidic marinades.

The original marinades were basic brines made for the preservation of fish. It doesn’t take much imagination to see that “marinade” and “maritime” have a common root. People still brine meats, but the technique is recognized as distinct from marinating.

Food safety is paramount when you’re working with raw meat. Handle your chicken carefully, and wash your hands after each time you touch it.

Because the marinade is in constant contact with the raw meat, some bacteria on the meat will find its way into the marinade. That’s ok, because you’re going to cook it and kill all the bacteria. But it does mean you need to be careful with the leftover marinade.

The guidelines are to throw away any unused marinade that’s been in contact with chicken — unless you boil it for a good time first.

Choosing the right kind of container is also important. Plastic resealable bags, glass containers, and reusable plastic containers are all good, so long as they close tightly. Don’t use aluminum because acids may react with the metal and negatively affect the flavor and color of the chicken.

Always marinate in the refrigerator rather than on the counter. Marinades do not protect you from bacteria-borne illness, so it’s important to maintain a consistent low temperature to keep the meat safe until it’s time to cook.

The varieties of marinades for chicken are virtually limitless if you consider each slight variation on a theme to be distinct.

Fluids and seasonings can be combined in seemingly infinite ways, always depending on your personal preference.

Some basic examples include:

Of course that’s just the tip of the tip of the iceberg, but you get the idea. Keep in mind the kind of marinade you use because that could impact how long you let it sit for.

How Long to Marinate Chicken?

Ok, here we’re answering the big one: how long do I let my chicken sit in the stuff before I can call it marinated? That’s an important question.

If you don’t leave it long enough, you won’t impart much flavor.

On the other hand, chicken left in an acidic marinade for too long will actually get tougher as the protein molecules squeeze closer together. An excessive bath in an enzymatic marinade makes meat mushy and, to use the technical term, gross.

Chicken is less dense than beef, so it doesn’t need to soak overnight like a thick steak might. Still, the size of the cut will make a difference, so don’t assume one time fits all.

According to the United States Department of Agriculture’s Food Safety and Inspection Service, chicken could be left in a marinade in the fridge for two full days. That means it would still be safe to cook and eat after that length of time, but I cannot imagine under what circumstances you’d want to do that.

To marinade an entire chicken, you’ll need at least 4 hours for decent penetration, but soaking as long as 12 hours, depending on the size of the chicken and the nature of the marinade, is not out of the question. Also, we’re talking about marinating defrosted chicken. If it’s frozen the marinade will not penetrate. (You can check out our guide on how to defrost chicken fast, if you’re curious ;-))

For skinless chicken breast, it’s possible to add decent flavoring in as little as 30 minutes, especially if you poke some holes in the surface to allow the marinade to penetrate. You’ll achieve tastier results, however, if you let it sit for up to 2 hours.

Thighs can be quite thick and may take anywhere from 1 to 6 hours to properly flavor. Anything with skin should sit a minimum of 2 hours to allow the fluid to get through to the meat.

So we recommend the following marinating times for different pieces of chicken:

The Difference Between a Marinade and a Brine

Firstly, what is brining? It is a process during which we soak meat in a salty water solution, with the primary aim of helping the meat hold onto more moisture at the end of the cook.

A brine can contain flavorings, but it MUST contain salt and water in order to do its job.

A marinade has a primary purpose of adding flavor to your meat. It does not have to contain salt or water. It can be made of oils, herbs, spices, juices and more.

So it’s a brine primarily for helping meat to remain moist after a cook, and it’s a marinade for primarily adding flavor.

A guide to the many different salt types available.

Now you know a little something about marinades, I hope you’ll start getting experimental with fluids and flavors and perhaps create your own “secret blend.”

Years of bad barbecue taught me to be wary of chicken on the grill, but when I see the chef pulling the meat out of a bag or bowl of marinade, I know things are probably going to be just fine.

If you have any personal marinade tips please share them with us and our community, that we might all reap the benefits of your wisdom. Mind you, if you want to keep your secret a secret, we won’t blame you!

How to Use Dry Rub — How Much, When, And on Wet or Dry Meat?

What is a Pellet Grill? How do They Work? A Quick Overview