Turning Up The Heat: What is Searing? How to do it, Why it’s Worth it

What is searing? What happens to meat during searing? Why do we use this technique so much? Hint: It’s all about added flavor! Learn how to sear meat properly and why you really should bother to, in our look at this essential cooking technique. 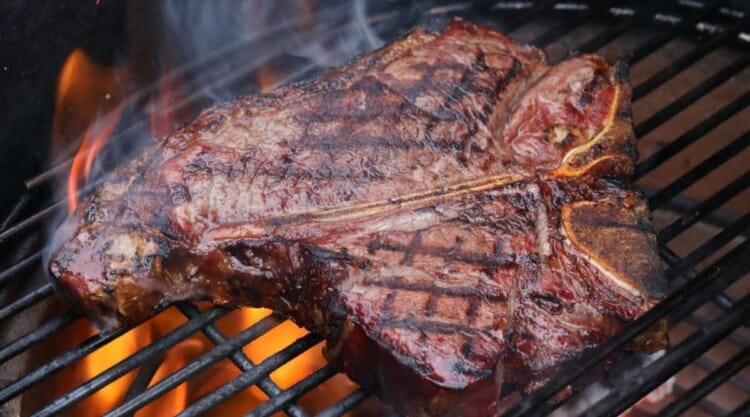 I like to read. A lot. For that reason, my first encounters with many words have been in a literary sense. So, I’d get to know such and such a word only in the way it’s used in the book, entirely oblivious to any broader or alternative usage. Searing is one such word.

If you’ve ever read a story in which a character is shot, then you’ve probably come across “searing,” too. The character almost always seems to describe a “searing pain” at the point of entry.

Sounds excruciating, doesn’t it? I’ve never been shot, myself, but the description is suitably graphic and probably accurate.

But what is searing when it comes to grilling?

In this article, we’re going to take an in depth look at searing. We’ll cover what it is, why we do it, the best ways to go about it on your grill or in your kitchen and most importantly, how it’s going to make our meat oh so very tasty!

What is Searing — A Definition

To sear something is to burn or scorch it, with very sudden and intense heat.

A bullet is traveling at a high rate of speed, typically faster than the speed of sound. Metal moving at that speed will burn skin on contact. Not pleasant! (and that’s enough of the ‘searing bullet’ talk, I promise!)

For our purposes, searing is a wonderful technique that any person serious about cooking quality meat should strive to master.

It’s the same principle as above; apply the meat to a very hot surface for a short period. But why?

Because it imparts a glorious aroma and extra layer of flavor due the Maillard reaction, as the outside of the meat is browned, creating a very visually appealing piece of food. More on this later.

Searing is Not Burning!

Well, it sounds like burning, doesn’t it? In a sense, it is really, but it’s a controlled burn, not the kind of burn that makes a brisket indistinguishable from a briquette. Think of it as a brief and intense period of cooking.

The idea is to very quickly cook the exterior of the meat, before finishing the inside more slowly until the desired level of doneness is reached.

Now, there are those who enjoy the taste of charred meat; it certainly creates a very intense flavor profile. If you’re one of them, you’ll want to sear a little longer than average. In fact, you may want to go Chicago-style, but that’s a whole other topic for another article.

Unlike, say, broiling or roasting, searing involves a blast of high heat for a short time, rather than cooking for an extended period at a constant temperature.

Why Would I Want to Sear My Meat?

Intentionally burning something seems counterintuitive, but not only will you enhance the flavor of your meat, but you’ll also impress your guests with your professional technique!

The purpose of searing meat is to impart a more complex combination of texture and flavor, but what is actually happening has long been misunderstood by many.

To Seal in the Juices? — So the Germans Would Have Us Believe

Maybe you’ve heard people talking about “locking in the flavor,” or, “sealing in the juices” as if searing created an invisible barrier to prevent moisture loss?

This misconception can be traced all the way back to a German chemist named Justus von Liebig. In 1847, he published a paper putting forth the hypothesis that high-temperature cooking would create a crust, and seal in the juices and moisture — and hence all the nutrients — inside the muscle tissue.

That hypothesis was first proven to be incorrect in 1930, by a study conducted at the University of Missouri. (That’s my kind of science!)

Moisture loss was shown to be moderately higher for seared meat than meat cooked at a constant temperature. Nevertheless, the myth persists, and many cooks and restaurants are still guilty of perpetuating this antiquated notion.

The Truth (and Science) Behind Searing Meat Before Roasting or Cooking

We’ve established the meat is not juicier after it’s seared. So why do cooks do it?

Not only does searing introduce an appealing flavor, but it also creates a complex pairing with the center of the meat.

The heart of the cut will be less cooked, and juicier than the seared exterior. Most mouths will relish the distinct, but complementary differences in texture and flavor.

Furthermore, searing the surface at high temperature causes the exterior of the meat to brown. Browning gives meat that appetizing color and lets the eyes and brain know the meat is cooked.

Browning is an example of the “Maillard Process.” First described by the French chemist Louis-Camille Maillard, the process is a chemical reaction between reducing sugars and amino acids. The results of the process are commonly seen on things we eat nearly every day, including:

If you want to show off your culinary knowledge to others, don’t confuse browning with caramelizing, which is a visually similar but chemically different process.

Caramelizing occurs at higher temperatures and involves pyrolysis, the decomposition of organic material due to high heat and lack of oxygen. (It sounds awful, but it’s delicious!)

For Maillard to happen, there must be protein and either carbs or sugar present.

Protein breaks down into amino acids at high temperatures and reacts with the carbohydrates or sugar. Foods that have less protein are less likely to brown in this way, but may caramelize. Many vegetables, for example, will caramelize, but not brown.

Has Browning Bamboozled our Brains?

It has been suggested that searing does not, in fact, enhance the flavor, but only makes the meat seem tastier.

Our brains have been conditioned to equate “brown” with “cooked,” and the enhanced aroma combined with the appealing color fool us into believing the meat tastes better when it’s presented this way.

While there may be something to this, I’m not inclined to believe searing is entirely smoke and mirrors. The same reaction occurs in so many forms of cooking, baking and brewing, and they’re all yummy, even when I can’t see them.

Ever had a cookie or a beer that tasted worse in the dark? I rest my case.

How Do I Sear Meat?

Meat can be seared in a pan, an oven, by cooking on a charcoal grill, or any high heat grill for that matter!

You cannot sear meat in a microwave because a microwave cooks by vibrating water molecules in food, which creates heat internally. The lack of external heat will prevent the browning process from occurring.

Here’s a quick look at pan searing beef, but the principles apply to all searing processes. (Personally, I think pan searing is best for seafood, which is more delicate than red meat, or even chicken.)

No matter how you plan to sear your meat, there are a few basic tips for searing to remember that will help you achieve the best results. (Though the process is slightly different for the reverse sear method.)

Remove excess moisture — pat down meat with a paper towel to remove surface moisture to avoid steaming instead of browning.

How to Sear Meat on a Grill

Searing meat on the grill is certainly my preferred method for preparing mouth-watering meat. There’s nothing quite like the taste and appearance of a cut of meat fresh off the barbecue!

So, without further ado, here’s what you need to know about searing like a seasoned pro.

Searing Meat in a Pan

If the pan is your preferred place for preparing your meat (or if the weather is keeping you from the grill), you can sear quite nicely using a good-quality, heavy-duty pan.

Searing Meat in the Oven

Yes, you can apparently sear in the oven, but this will take a little more time. I’m struggling to find a good reason for searing in the oven, but I’m coming up empty. Even if you don’t have a grill, you’ll still get good results with a skillet or pan.

If, for some reason you don’t own a good enough pan for high-heat cooking, I suppose you could give the oven a go.

I know you can sear slowly, A.K.A. roast, but searing a smaller cut like a steak? It would overcook the center before the outside has seared properly. There’s just not enough time. So I’m a little skeptical, myself, but here’s a link to everything you might possibly want to know about the subject.

Please let me know if you try it, and it actually yields results worthy of a true meat-lover!

I first felt I’d mastered the grill when I figured out how to cook my meat all the way through without burning it. Turns out, I was just beginning my culinary journey!

Adding techniques like searing to my repertoire has dramatically enhanced the quality of my presentation and flavor.

Ironically, searing seems like the finishing touch for a perfectly cooked serving of meat, and yet it actually comes at the beginning. While not strictly necessary, once you’ve learned to properly sear your meat (and we’re talking steaks, chops, burgers, chicken, fish, scallops — you name it!), you’ll wonder why you never did it before.

If you have any additional tips you’d like to share with us, please do! While there are many practical guides to cooking, there is no substitute for personal experience, and the secrets we learn along the way.

What is Grilling — And Why Do We Love It So Much?

Reverse Sear — Is This The Best Way to Cook Thick Steaks And Meats?