What is Grilling — And Why Do We Love It So Much?

What is the definition of grilling? How does it differ from BBQ, or smoking, or any other outdoor cooking technique? In this short piece, we define grilling, how it differs from other techniques, and why we love it so much (Hint: Flavor!) 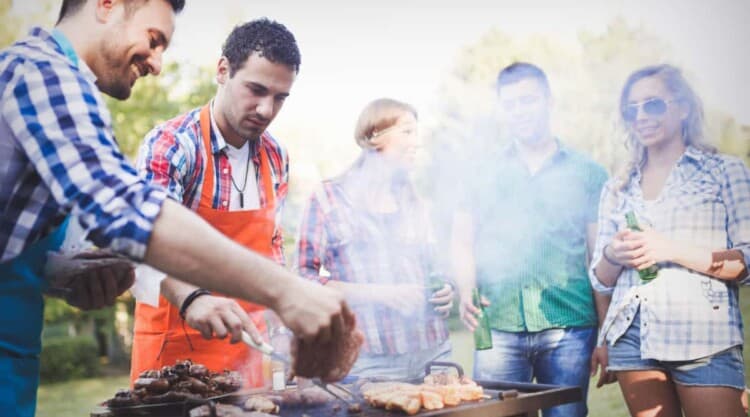 Grilling is something we’ve all grown up watching mom or dad do since as long as we can remember. As kids, we were mesmerized by seeing those fat hot dogs plump up and split open (if you had natural casing dogs).

Remember the smell of beef from those thick juicy burgers, with all that fat dripping onto the shimmering red coals with a hiss, a shot of fire and blue smoke curling around the sizzling edges?

Now it’s fun to watch the fascination in the faces of your kids or grand-kids as they watch you masterfully flip burgers with style and showmanship. You might say grilling is a natural-born instinct. It’s in our blood almost from birth.

But what is grilling? How do we define it?

What is Grilling? A Definition

The scientific version explains grilling as a fast, dry heat cooking method that uses a “significant amount of direct, radiant heat.” Frying in a pan or griddle uses direct conduction heating while grilling is thermal radiation.

Grilling temperatures can often exceed 260 °C/500 °F making this a fast cooking method that you must watch carefully. Otherwise, your perfectly cooked hot dogs will burst into road flares in mere minutes.

The first time I was cooking for my wife, Stephanie, way before she was my wife, I actually put three chickens on the rotisserie, and I closed the grill, which is really a bad idea. But I just wasn’t thinking very straight that day. And I looked outside, and I saw, like, smoke and flames. — Bobby Flay

What truly makes grilled foods taste better is the browning of proteins and sugars creating that beautiful coloration and extra flavor profile on meat and vegetables. It’s called the Maillard reaction, and this browning happens when foods reach temperatures in excess of 155 °C/310 °F.

… And that’s your science lesson for today.

When it comes to true grilling, you’re cooking food on an open wire grid with the fire above or below the food. Typically, if the heat source is above, we call it broiling, but it still qualifies as grilling for our definition.

We have way more detail in our epic guide on how to grill on a charcoal grill. You should definitely check it out if you want a full on, detailed, step-by-step guide to all things grilling.

It’s Called a “Barbecue Grill,” So What’s the Difference Between Grilling and BBQ?

The difference between grilling and barbecue is temperature and cooking time. Grilling is fast cooking over high heat while barbecue is slow cooking over many hours with low, indirect heat.

As discussed in our guide comparing smokers to grills, You also typically need different equipment for each cooking method, (though you can, confusingly, smoke on grills, and grill on some smokers.)

Another significant difference between the two methods of cooking is the quality of the meat.

Meats that are tough and fatty require a long slow cooking process to break down the collagen and other tissues to make the meat juicy and tender. That’s why we use larger, more inexpensive cuts for barbecue.

On the other hand, lean or tender meat, chicken, and seafood need fast cooking over high heat to bring the internal temperature up to a safe level without drying them out.

Have you ever heard of barbecuing shrimp or skinless chicken for 18 hours? You would end up with jerky or art pieces to hang on your wall.

If you’re still not sure which meat to use, here’s a quick guide.

Who Started All This Grilling Anyway?

The first evidence that man knew how to throw a tailgate party was in Ancient Greece by the Mycenaean civilization, about 1600 B.C.

During archaeological excavations, they uncovered rectangular ceramic trays. Julie Hruby, an assistant professor of classics at Dartmouth College, experimented with reconstructing these ancient clay trays to understand their purpose.

It turns out they were heavy yet portable ceramic grills where the tray would hold coals over which skewered meat would cook. You know it as souvlaki in Greece or Shish Kabob elsewhere.

Back then they had slaves and oxen, so weight wasn’t an issue. Thankfully, we’ve replaced them with pickups, SUV’s and lightweight metal grills that we can take anywhere.

Why the George Foreman Grill and Hot Rocks Are Alike

There’s something about standing over a grill or outside with the family that inspires us.

Your oven has a nice set of racks, but can you grill in your oven? Of course not. By our definition above, that is radiant heat with no flavor inducing flame or coals. Your oven roasts or bakes.

How about the hot stone method that survivalists, hardcore woodsmen, and cavemen use? You heat a flat rock until it’s smoking hot, move it to one side of the fire then throw the meat on it to cook it.

Is it grilling? No. The heat comes from the stone and not the coals or fire. It’s the same as cooking in a skillet or with the famous George Foreman Grill. It’s a double-sided electric skillet. No smoke, no fire and no fun (Sorry George).

“There’s something about standing over a grill or outside with the family that inspires us.”

Grilling Is a Simple Trio — Some Meat, A Grill and Fire

Grilling is easy, and you don’t need anything fancy.

If you’re going to grill, you only need three things: Meat, grill and fire. Of course, there’s much more to learn, many grilling tips and tricks that will up our game, but it’s essentially those three things.

Nothing adds more flavor to meat than fire and smoke. It’s as simple as that. Get in touch with your childhood memories and fire up that grill!

What are your memorable grilling experience? We would love to hear from you in the comments below.

Turning Up The Heat: What is Searing? How to do it, Why it’s Worth it

How Long to Grill Steak, Rare to Well Done, Times and Temperatures