The 8 Primal Cuts of Beef — Everything You Need to Know

Today we look at the American derived eight primal cuts of beef. We look at their position on the cow, names, sub-primals, and then major cuts they are butchered into. We also look at the best methods of cooking and uses of the produce from each primal. 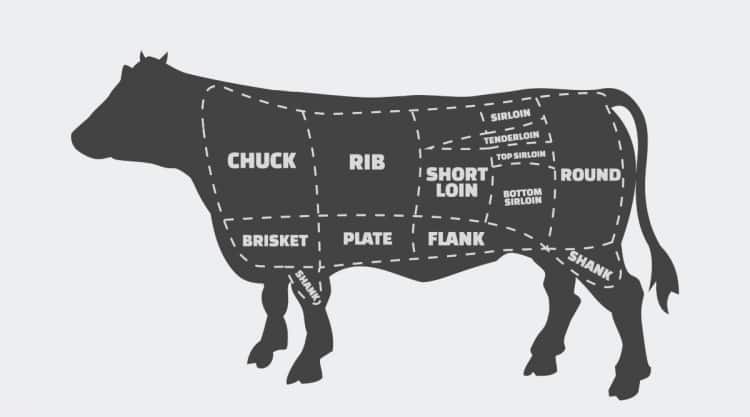 How many primal cuts of beef are there? That kind of depends on whom you ask. The answer ranges from 8 to 12.

We subscribe to the 8 primal cuts theory, and to that end, we’re going to break each one down for you.

Today, we’ll cover the 8 primal cuts of beef, including all the sub-primal cuts and the best ways to cook them.

Knowing your beef cuts is a little like knowing your Pokémon — there are lots of them to keep track of, and they come in all different forms. How do you know which one to use in a given situation?

An excellent place to start is to learn the primal cuts, their sub-primals, and their associated characteristics. Once you know them, it’s much easier to choose the best meat for your menu plan or your barbecue gear.

Stick with me as I take you through all eight primal cuts of beef and tell you where each comes from and the best way to cook them both indoors and out.

The chuck is best known for its delicious, medium-fat ground beef, the chuck also contains some good roasts and other cuts worth your attention.

One of the largest primal cuts of beef, the chuck is right at the front of the cow, starting at the base of the neck and including the shoulder.

Ribs and roasts from the chuck are ideal for low and slow smoking, with the shoulder roasts, in particular, turning out surprisingly tender.

Shoulder roasts have excellent marbling, so they are excellent for roasting over indirect heat to render the fat and infuse the meat with moisture.

Most steaks cut from the chuck are best suited to tenderizing with a marinade or a hammer before cooking. They are heavily marbled and much sought after. However, if you’re lucky enough to find a blade or flat iron steak, grab it and cook over direct heat for a quick sear and a pink interior.

For indoor cooking, braising at low temperature will give you the best results for most roasts from the neck or shoulder.

Though the ribs themselves are less popular than pork ribs, many famous and delicious cuts originate in the rib primal.

The surprisingly small rib primal is located at the upper middle of the cow, starting from the spine and running down through the center to an imaginary line a little more than halfway down the torso.

For the steak cuts, including the prime rib, direct heat grilling is the method of choice for barbecue lovers. This is the best way to get searing hot temperatures to cook the outside of the steaks, but leave the centers juicy and flavorful.

Indoors, frying ribeye or rib steaks in a pan or skillet is the way to go. Prime rib cooks nicely in a standard oven.

Short ribs are best when braised to tenderize them, while back ribs are never better than when they come out of a smoker after a long, slow cook.

What is the difference between grass fed and grain fed beef?

The loin, which includes the sirloin, is where you’ll find many of the famous steak cuts we meat lovers drool over.

This most prized of primal cuts resides towards the rear of the cow’s back, behind the rib, but in front of the round. Like the rib primal, it stops short of the belly of the cow.

All these steak cuts are ideal for fast cooking over direct heat on a charcoal or gas grill. Typically, they are seared for a few minutes on each side to achieve the flavor of the Maillard reaction, with the inside cooked to order — usually (and hopefully) rare or medium-rare.

In the kitchen, steaks from the loin cook beautifully in a good quality cast iron skillet or frying pan over very high heat.

Rarely, you’ll see a whole or mostly whole loin cooked in an oven and then finished on a skillet or on a grill to sear and char the exterior.

Cuts from the round tend to be inexpensive owing to their leanness and lack of tenderness. However, this just means they’re perfect for low-cost meals that are heavy on the sauce, or for soups and stews, and also some of the best cuts of beef for jerky making.

This is the hind-most cut on the cow, encompassing the entire rear of the animal above the back legs.

Roasts cut from the round primal are not especially moist or tender but can be tasty if cooked properly. Searing the sides and then roasting over medium heat can deliver good results, but be careful not to dry it out. Low and slow smoking for a couple of hours works well, too, especially with a water pan in place to increase the moisture levels.

Steaks cut from the roasts are best when cubed, braised, and used in stews, stroganoff, and other moist saucy dishes.

Marinating cuts from the round helps to tenderize them, making them less chewy and much more palatable.

Cuts from the flank are inexpensive, making them perfect for dishes that rely on sauces and marinades for flavor than meat.

The flank is at the rear of the cow’s belly, a smaller primal, stopping short of the hind legs.

There isn’t much fat back here, so that means marinating and/or tenderizing is usually the first order of business for flank meat.

Grilling over medium heat on a gas or charcoal barbecue until cooked to medium is effective for flank cuts. You can then cut them up for fajitas or stir-fry, or even salads.

London broil is often marinated and served stuffed or sliced thin with plenty of herbs and other seasonings. Confusingly, this dish is called “London broil.”

Is this the least well-known beef primal? That’s too bad — there’s some excellent meat here.

Found on the belly of the cow, the short plate is right in the center.

The hangar steak is excellent for searing on a screaming hot grill and serving pink and juicy inside. Likewise, a hot skillet with butter is all you need for a tender, succulent hangar steak off the stovetop.

Skirt steaks are a little tougher and should be marinated before grilling over direct heat or in a pan on the stove before using for dishes like fajitas, tacos, stir-fry, pasta, and more.

If you prefer your beef on the lean side, the lower-fat cuts from the shank should be on your shopping list.

You’ll find the shank at the cow’s chest but behind the brisket and more towards the abdomen. This cut also includes the top of the leg. The muscles here see a lot of action, making them both lean and tough.

When cooked whole as a roast, low temperatures and hours of cook time are required to slowly transform the tough meat into a tender and tasty dish. Indirect heat on a conventional grill or smoker is the way to go for outdoor cooking.

Your best bet is a slow-cooker in the house, with the shank stewing away in liquid for hours. Braising will also bring out the best in shank meat, as it does with the famous Italian dish Osso Buco.

A favorite for smoking, this is also the cut from which corned beef is made.

The brisket is found right up front in the lower chest or breast of the cow. As you might guess, it gets a lot of use as the large animal moves around, so it’s dense and low on fat content.

Smoking is your best choice for an entire brisket, particularly in a standalone smoker. Prolonged exposure to indirect heat releases incredible taste and makes the otherwise tough and chewy brisket melt in your mouth.

Brisket also benefits from braising; the added moisture tenderizes the meat and lets it soak in the additional flavor.

Cut into chunks, brisket makes great stewing meat, too, as it gradually goes from chewy to tender in the delicious liquid.

Now that you know more about the eight primal cuts of beef and their many sub-primal cuts, hopefully, you’ve discovered something new to try out on your grill or in your smoker.

When you know how to cook them, you can enjoy delicious meat from every section of the cow on any budget.

Of course, not every cut is easy to find. If you don’t see it in the meat section at your grocery store, ask someone what might be lurking in a freezer. Local butchers and online meat sellers are also great sources for those hard-to-find cuts.

Bookmark this page for future reference and share it with your friends — who can cook ‘em all? Have fun!

Grass Fed Vs Grain Fed Beef, What’s the Difference? Which is Better?

The Best Cuts of Beef for Jerky — And Which to Avoid!

Tri-Tip Vs Brisket — What’s the Difference? Which to Choose and Why?

Top Round Steak — Everything You Need and Want to Know