The Best Cuts of Beef for Jerky – And Which to Avoid!

Beef jerky is a snack that satisfies like no other. But, if you’ve only had gas station jerky, you’re missing out on one of the most incredible things you can make in your smoker. To help you make delicious homemade beef jerky, let’s learn which cuts are best for the job. 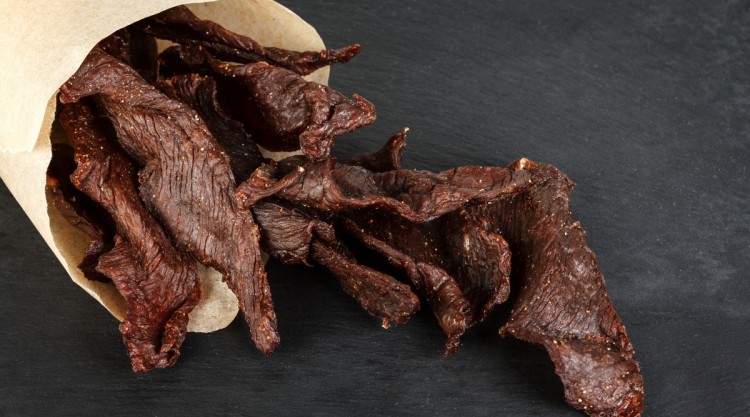 Today’s topic: choosing the best cut of beef for jerky, including which cuts are best, which are ok, which to avoid, and why.

There’s a beef dish for every meal, from breakfast burritos to a Reuben sandwich to a steak dinner. And for between meals, it’s a heck of a snack.

With due credit to Homer Simpson, I say, beef: is there anything it can’t do?

We’ll start by determining the qualities that make great jerky and then look at the top contenders individually.

Just as importantly, I’ll tell you which beef cuts to steer clear of, pun intended. Finally, I’ll summarize a few key traits to look for in the store, including grading and cost.

Is There a Single, Best of the Best Cut for Jerky?

Hold the phone — can we end the debate right here? Actually, no, not really.

There are 10 cuts we think are viable for making jerky. Of those, 6 stand out above the rest. Why?

Let’s discuss the properties of a cut of beef that make it ideal for turning into jerky.

What Makes a Cut Great for Making Jerky?

If you believe in the old barbecuer’s motto “fat equals flavor,” this next bit might surprise you.

To make the best beef jerky, start with lean meat. I know, right? Mind blown. But it makes total sense.

Plenty of lean cuts still have fabulous flavor. Also, remember we want our final product to be dry and chewy — the exact opposite of how we want our steaks and ribs.

Fat still equals flavor, so we want a bit in there. But, excess fat will reduce the shelf life of our jerky because it spoils more quickly than the meat.

Think about the outer fat, too. Dehydrating turns fat on the exterior of your jerky to gristle, and no one wants that. This may require a bit of trimming on your part to remove the excess surface fat.

Also, fresh meat makes the best jerky – the fresher, the better. So avoid the freezer at the butcher, and don’t pre-freeze your meat before starting the jerky-making process.

The Best Cuts of Beef for Jerky and Why

Now that we know the properties we want in our jerky meat let’s look at the cuts that deliver them.

Of all the sub-primal cuts from the round, the eye of round is the most tender. It’s very lean but with just a bit of interior marbling.

Additionally, the grain runs in just one direction – lengthwise – so it’s easy to cut into strips. Finally, it’s a low-cost cut, making your eye of round jerky an economical snack. (Also good news if you’re new to making jerky and still honing your technique!)

You will have to remove the fat cap before you slice it up, but this is easily done with a sharp knife.

The bottom round is a lean exterior muscle from the top of the rear leg is the least tender cut from the Round primal. But don’t let that discourage you!

Bottom round has enough interior marbling and rich, beefy flavor to make it worth your while.

There may be a fat cap to trim away, and look for any large intrusions of intramuscular fat that need removing. But, this bit of prep work is a small price to pay for the small price you paid at the grocer!

Another cut from the Round primal, top round is an interior leg muscle. In terms of tenderness, it falls somewhere between the eye of round and bottom round.

Top round is a very lean cut and may show next to no marbling at all. Trust me on this one, though: it’s beefy and delicious and makes terrific jerky.

Prep should be minimal (there may be a thin fat cap to remove), and just like other round cuts, the top round comes at a bargain price.

Flank meat, especially the steak, costs a bit more than some of our other top cuts for making beef jerky. But, it’s worth every penny for the excellent flavor.

There’s more fat, both inside and out, on this cut than on many others in this list. For that reason, you’ll need to spend some time trimming to get the best results.

As well, if you don’t cut it right, you’ll end up with very tough jerky; slice against the grain to keep it tender and tooth-friendly.

Done right, beef jerky made from flank steak is excellent.

Sirloin (all, Including Top And Bottom)

No matter which part of the sirloin primal you pick, including the tip, you’ve got the makings of fantastic beef jerky.

There’s some inner marbling — enough for flavor, but not so much that we need to worry about spoilage. Trim away the outer layer of fat, and you’re good to go.

The price of sirloin cuts is a bit higher than round cuts, but they’re easier to find, too. That’s an important consideration if your grocer has a limited selection. Also, it’s tender and tasty, which is precisely what we want.

Some of the very best steaks come from this primal, including the New York strip and porterhouse. The meat here is delicious and tender, but it doesn’t usually go overboard on the marbling; some judicious trimming will take care of it where it does.

Yes, many of the short loin cuts come with a premium price tag, and some among you may gasp at the idea of drying such fine meat out for jerky. If you can swallow the cost, though, you’ll love swallowing this excellent jerky. Just be sure to tell everyone what kind of meat you used.

While we don’t think these 4 cuts rank with our top 6 best cuts of beef for jerky, they do work. In fact, some jerky fiends consider these their go-to cuts. We’ll leave it to you to decide.

The chuck primal yields some fine steaks and roasts, and ground chuck makes excellent hamburgers. Hey, and it makes great jerky, too. Why is it in this grouping, then?

There’s a lot of fat in this primal up at the shoulder, which means a lot of time spent trimming. Even with the exterior fat cut away, there’s enough intramuscular fat to move the “best before” date way up.

If you plan to eat your jerky right away, I say go for it. However, if you plan to store it for weeks or slowly work your way through it, you might want to try another cut.

You might think brisket is ideal for jerky; it’s tasty and grainy and holds up well to extending cooking.

But there’s a lot of fat on brisket and a fair bit of marbling. For smoking, that’s ok; the fat renders during the smoke session, infusing moisture and flavor.

For jerky, though, we don’t want moisture. Unfortunately, that means you’ll spend a LOT of time removing fat before you’re ready to make your jerky, and it still won’t last as long as jerky made from our top 6 cuts.

If you’ve had tenderloin meat (the filet mignon comes from this sub-primal), you know it’s incredibly succulent and tender. While that’s awesome for a steakhouse or something special off your grill, “tender” is not always ideal for jerky.

Don’t get me wrong; tenderloin jerky is delicious. For some, though (including me), part of what makes jerky so addictive is the chewiness, and you lose a lot of that with tenderloin meat.

There are some advantages to ground meat: you can buy it lean, you don’t have to trim it, and it’s easy to add seasoning.

On the other hand, if you don’t have a jerky gun, it’s time-consuming and a little tedious rolling it out, slicing it into strips, and then carefully arranging it on a tray.

It’s an inexpensive choice, but I suggest skipping it unless you pick up a jerky gun.

Cuts to Avoid and Why

Some cuts of beef just aren’t suitable for making jerky under any circumstances. Cook and enjoy these otherwise excellent cuts; just don’t use them for jerky.

Think of all the incredible cuts we get from the rib primal: prime rib, ribeye steaks, beef ribs – and the list goes on. What makes them great for the plate, though, also makes them useless for jerky.

Rib meat is fatty and fine-grained. Not only does that make them hard to cut thin and dehydrate, but it also leaves them crumbly when you do.

There’s no lack of flavor from these belly cuts, but they can be very tough. Dehydrating them does NOT help the matter!

If you’re interested in making dog treats, the skirt and plate meat are spot-on for powerful canine jaws and teeth. For humans, not so much.

What to Consider When Buying Meat for Making Jerky

Here are the very important points to consider when you’re shopping for beef to make jerky.

The USDA divides beef into three categories for quality: Prime, Choice, and Select.

Choice is your best choice; it has less marbling than Select, but not as much as Prime. It’s typically lean but with enough fat and flavor to make quality jerky with the right texture, while not having too much fat which would make it spoil too quickly.

The best beef jerky still tastes like beef, even after marinating and seasoning. Pick richly flavored cuts so that the beef flavor shines through at the end.

Tough meat may soften up if cooked low and slow. But, since we’re pulling out as much moisture as we can manage, we want to use tender cuts, not tough ones because after drying it may be inedible as jerky.

So as the song says, “try a little tenderness.”

I did list a few pricier cuts above. But overall, since you’re drying out the meat and slavering it with lots of spice, marinade and flavoring, why not save some coin and buy less expensive meat? It works very well, and is a way to make something fantastic from cheaper cuts.

Reserve those premium cuts for the grill.

Choosing the best beef cuts for jerky means forgetting much of what you know about buying beef. Tenderness and heavy marbling are not what we want, and the best options are rarely the most expensive. In fact, you can look at making jerky as part of nose-to-tail consumption, as it uses cuts of beef you might otherwise skip.

Have you made jerky at home? Let us know what cuts you’ve used and how they worked out — we love hearing from our community through email, the handy contact form, or on social media.

Until next time (which could be right now, if you care to browse the site), be well and enjoy the jerky. Thanks for reading!