Blue Steak — What is it? And is it Safe to Eat?

Some enthusiasts find a fringe niche to enjoy with anything popular like comic book fans and cosplay or that guy on TV who travels the world catching monster fish. For steak eaters, it’s ordering or cooking “blue” steak. No, it’s not Smurf meat — but it may be the next logical step for anyone who loves their steak “bloody as hell.” 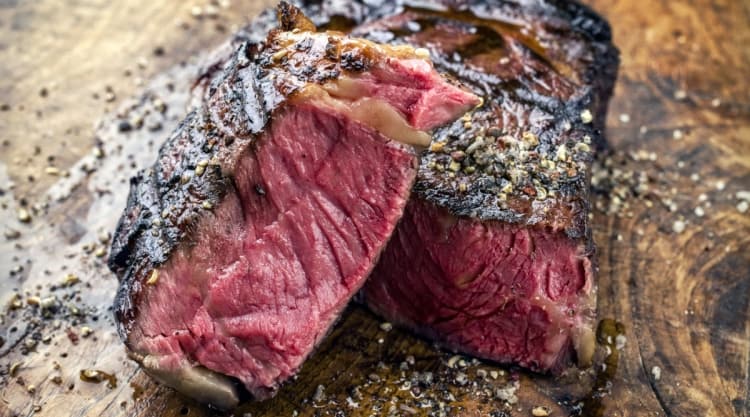 Here’s where we explain what blue steak is, whether it’s safe to eat, and how to cook it properly.

Let me say right up front that writing this article was a massive pain in the butt. It wasn’t the exhaustive research, sorting out conflicting opinions to be sure I was presenting the most factual expositions, or even fighting the urge to cook every steak in my freezer and go into a blissful meat coma.

Nope. It was autocorrect trying to change every instance of “blue steak” to “blue streak.”

If you’ve always wondered what blue steak is, wonder no longer! I’ll explain not only what it is and the origins of the term but also how to cook it yourself on the grill.

Key to that, I’ll tell you which steak cuts are best for blue steak and which ones you might be better off leaving for another time.

Ready to get the blues in a good way? Let’s do this.

What is Blue Steak?

Also known as “Blue Rare” or “bleu,” a blue steak is the first stage on the steak doneness chart. The outside of the steak is seared, but for such a short time that the interior remains cool and essentially raw.

Why is it Called Blue Steak?

It’s tough to get a consensus on this. Some say it’s because the meat is dark purple when you first cut it, though it quickly changes to red when exposed to oxygen. The purple, they say, is the result of residual deoxygenated blood in the muscle.

I’m not a fan of this idea; for one thing, there’s no blood in your steak — it’s a pigmented liquid called myoglobin. That’s what leaks out of your juicy steak if you cut into it without allowing your steak to rest after cooking. Even when we use the correct terminology, this still doesn’t hold water for me.

Yes, myoglobin in oxygen-deprived meat turns into deoxymyoglobin. And, yes, again, deoxymyoglobin is purple-red. But, you rarely see steak this color — it tends to go red in a hurry. Second, purple-red is NOT blue. Next!

Another theory is that the oils from searing a steak have a bluish sheen. Some suggest that it’s because “blue” represents “cold” or “cool,” which the interior of a blue steak should be.

Lastly, I’ve read that it comes from the French cooking term “Au Bleu,” a method of cooking fish either freshly killed or still alive in a bouillon of water, vinegar, and seasonings. Applied specifically to trout, this cooking style turns the fish bluish.

Is Blue Steak Safe to Eat?

Though steak this raw may not be for the squeamish, it is perfectly safe to eat if it’s cooked properly.

The key to cooking blue steak is the sear — searing kills the bacteria on the meat’s exterior. Since the bacteria cannot possibly be inside the steak, exposure to high temperatures on the outside is all you need.

However, it is crucial to sear not only the top and bottom of the steak but also the sides.

Steaks cooked to higher doneness levels are on the heat long enough to cook the sides sufficiently to kill pathogens without direct contact with the grate. On the other hand, a blue steak is on the cooking surface for a very short period, so it’s necessary to cook the edges (every surface!) as well.

What Cuts of Steak Can You Cook Blue? Which are Best, and Why?

You can certainly try to cook any steak blue. But, the results may not be what you hoped for if you use the wrong cuts.

Lean and tender cuts work best, without a lot of fat marbling.

Your best choices for a blue steak include:

All these cuts are tender and tasty but tend to have minimal fat intrusions and marbling.

Be sure your steaks are cut thick — at least 1 inch, preferably 1.5 inch or more. A very thin steak will cook through in a hurry, even with, say, 60 seconds of searing.

Which Cuts Should You Not Cook Blue? Why Not?

Some of the tastiest steaks contain a lot of fat marbling which is something to avoid for cooking blue.

Fat needs longer exposure to heat to render and deliver moisture and flavor to your steak. A fatty steak served blue would be riddled with tough and chewy chunks of fat. Not an appetizing thought.

For the same reasons, don’t try to cook any low-cost, tough steaks blue. Steaks like these need marination and enough time in the heat to break down the fibers to make them edible.

As I mentioned in the previous section, thinly cut steaks should also be avoided. By the time you safely sear the entire exterior, you’ll likely have cooked the insides to medium-rare. It’ll be delicious, of course, but it won’t be blue.

Cuts to generally avoid if you want to try blue steak include:

While it’s totally possible to prepare these steaks to perfection (frankly, I’ve loved them all), they just aren’t meant for the “sear it and serve it” nature of blue.

That’s not to say you won’t find people who’ve tried it, and some have even liked it. In my opinion, though, these aren’t the way to go.

What Temperature to Cook Blue Steak to?

The target internal temperature range for blue steak is between 115 °F and 120 °F.

Your first point of contact is the seared exterior, and this will taste exactly as you expect — heavy on the umami from the charring and the Maillard reaction.

But, as soon as your teeth penetrate the surface, everything changes. There will be contrasting coolness when you reach the uncooked meat, though it should not be cold.

The flavor will vary depending on the cut, of course. In general, you should find it beefy, but maybe not as complex as a steak that’s had a bit longer to cook.

A variant on blue steak is the Pittsburgh steak or “black-and-blue.” This cooking style involves using a lot of butter to char or burn the steak’s exterior at the hottest temperature you can achieve on your grill. The goal is to quickly char the outside but leave the inside as close to raw as possible.

What Texture is Blue Steak?

Heat breaks down beef proteins, making the meat more tender. Blue steak isn’t hot enough to achieve this magic, so you’ll likely find it chewier and even a bit spongy compared to even a medium-rare steak.

Of course, all that extra chewing allows you to experience the flavor for even longer, creating a very satisfying experience if your steak is naturally flavorful.

How to Cook a Steak to Blue on a Grill

Is your mouth watering? Ready to try cooking a blue steak for yourself? Here’s how it’s done.

By the way, there’s no reason to rest a blue steak. Resting a steak allows liquids squeezed by contracting fibers to redistribute after exposure to high temperatures. With a blue steak, the interior doesn’t get hot enough for this to become a problem.

Now that you know eating blue steak is perfectly safe and how to cook one properly, are you ready to give it a go? Blue steak isn’t for everyone, but it’s worth a try; many steak lovers swear this is the only way to enjoy the true flavor of a steak. It’s certainly full-on carnivorous behavior!

If you try it, let us know how it went and what you thought! Send an email, leave a comment below, or find us on social media and leave a few words.

However you like your steak (yes, even if it’s well done), thanks for reading, and may your grates never rust.

How to Tell if Steak is Bad, Gone off, or Spoiled

What is Tenderloin Steak — or Filet Mignon? Plus Where to Buy and How to Cook it